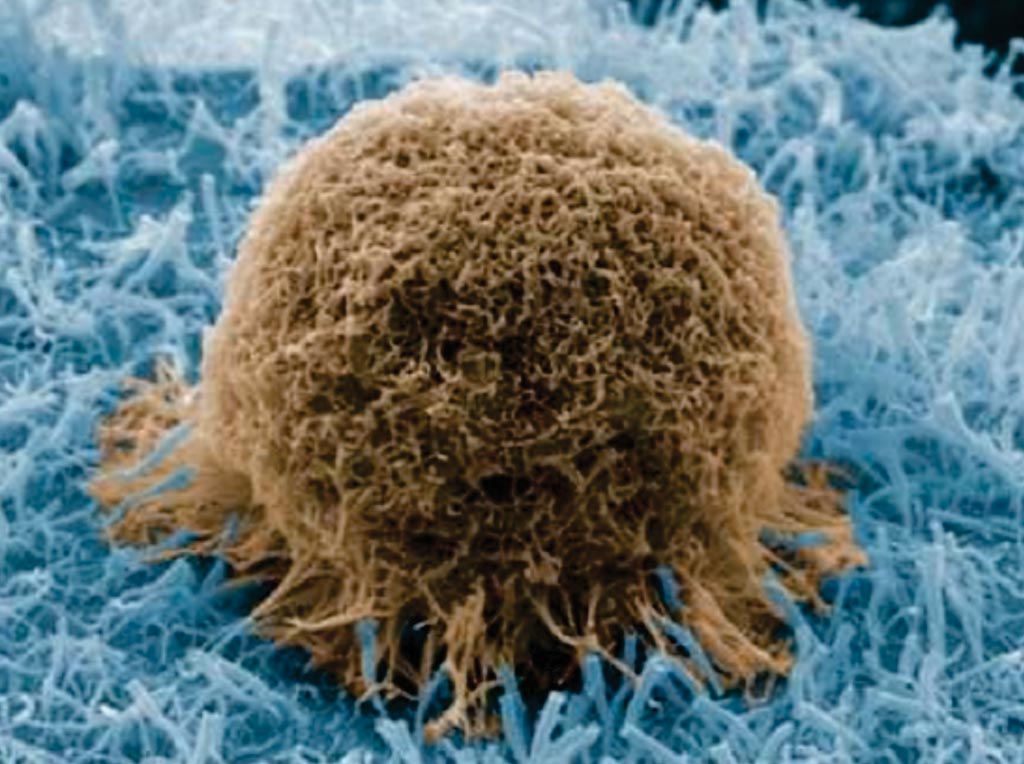 Image: A scanning electron micrograph (SEM) of a prostate cancer cell captured on frosted slide with silica nanowires (Photo courtesy of the American Chemical Society).
In men with prostate cancer, some tumor cells exit the prostate gland and circulate in the blood. Detecting these cells could enable diagnosis at an earlier stage or help doctors assess whether treatment is effective.

A new type of sensor has been developed that acts like Velcro for prostate cancer cells, sticking them to a modified frosted glass slide, like those used in medical laboratories, so that they can be identified from blood samples. The low-cost method could help doctors better diagnose and monitor the disease.

Scientists at the Chinese Academy of Sciences (Beijing, China) and their colleagues developed a simpler, more cost-effective way to monitor prostate cancer cells in the blood. The team based their device on frosted glass microscope slides. The frosted area, which is used to hold and label the slide, is a sandblasted surface with tiny depressions. They added a solution to the frosted slides that caused silica nanowires to grow on their surfaces, and then they suspended antibodies that recognized prostate cancer cells from the nanowires.

After getting captured by the antibodies, circulating tumor cells became trapped in the depressions on the slide and tangled up within the nanowires, similar to the interlocking surfaces of Velcro. The team could then visualize the cancer cells with microscopy, and found that the device had a capture efficiency on par with other approaches. When the scientists tested blood samples from prostate cancer patients, the devices detected as few as 10 tumor cells in 1 mL of blood.

The authors concluded that the nanobiochip has been successfully applied to identify circulating tumor cells (CTCs) from whole blood specimens of prostate cancer patients. Thus, this frosted slide-based biochip may provide a cheap and effective way of clinical monitoring of CTCs. The study was published on May 17, 2018, in the journal ACS Applied Materials & Interfaces.