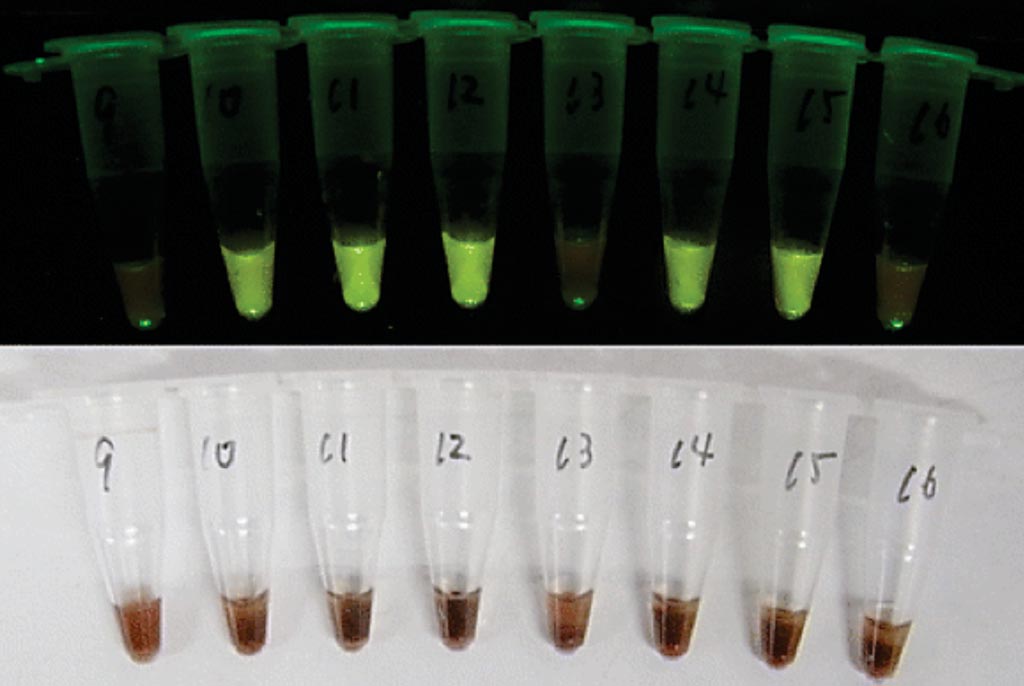 Image: Visual determination of positive and negative samples. Examples of malaria CZC-LAMP tubes after the reaction. It is not possible to determine positive or negative under natural light due to the interference by hemoglobin (lower). However, positive samples emit green fluorescence under 505 nm blue-green light (upper) (Photo courtesy of Hokkaido University School of Medicine).
Plasmodium falciparum is thought to be the most prevalent among Plasmodium species and although this species has been well investigated epidemiologically, non-P. falciparum malaria infections have been rather neglected because of their less severe clinical symptoms and difficulties of diagnosis.

Scientists at the Hokkaido University School of Medicine collected human blood DNA samples from 74 residents from a malaria endemic area in eastern Zambia. These malaria dry-LAMPs were optimized for field or point-of-care operations, and evaluated in the field at a malaria endemic area in Zambia with 96 human blood samples. A malaria conventional rapid diagnostic test (RDT) that immunologically detects and differentiate P. falciparum (Pf) and non-P. falciparum (non-Pf) species, was also used.

To determine the sensitivities and specificities, results obtained by the on-site LAMP diagnosis were compared with those by the nested polymerase chain reaction (PCR) and nucleotide sequencing of its product on an ABI 3130 capillary sequencer. For the LAMP reaction positive samples exhibited a bright fluorescent green color under a transilluminator, and two independent observers recorded the result.

The authors conclude that the malaria the assays, known as CZC-LAMPs, showed high sensitivity and specificity to both P. falciparum and non-P. falciparum. These malaria CZC-LAMPs provide new means for rapid, sensitive and reliable point-of-care diagnosis for low-density malaria infections, and are expected to help update current knowledge of malaria epidemiology, and can contribute to the elimination of malaria from endemic areas. The study was published on January 13, 2017, in the journal Parasites &Vectors.