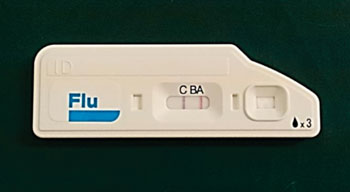 Image: The rapid influenza detection test Quick Navi-Flu (Photo courtesy of Otsuka Pharmaceutical).
Reverse transcriptase polymerase chain reaction (RT-PCR) has a high sensitivity and a high specificity for the rapid diagnosis of influenza infection; however, the high cost and necessity of specialized equipment have limited the use of RT-PCR in the clinical setting.

Immunochromatography-based rapid influenza virus antigen tests, in which the result appears within 15 minutes, have been used for the early diagnosis of influenza in the clinical setting in Japan. Rapid influenza detection tests (RIDTs) equipped with an instrument-based fluorescence reader system has recently been developed, and their performances have been validated.

Scientists at the Tokyo Medical University (Japan) enrolled a total of 123 participants consisting of 53 men (43.1%) and 70 women (56.9%). The mean age of the patients was 35.1 years (range 20–74 years). The median time to visiting the hospital after illness onset was 26.2 hours (ranging from a few hours to five days). The study was performed from December 2013 to March 2014. Nasopharyngeal swab specimens were collected by performing original swab samplings, which were composed of three swabs.

The authors concluded that GOLD SIGN FLU was useful for diagnosing influenza A, and the result was readily available for influenza B particularly among adult patients. Quick Navi-Flu showed better sensitivities and specificities than GOLD SIGN FLU. The study was published in the November 2016 issue of the International Journal of Infectious Diseases.