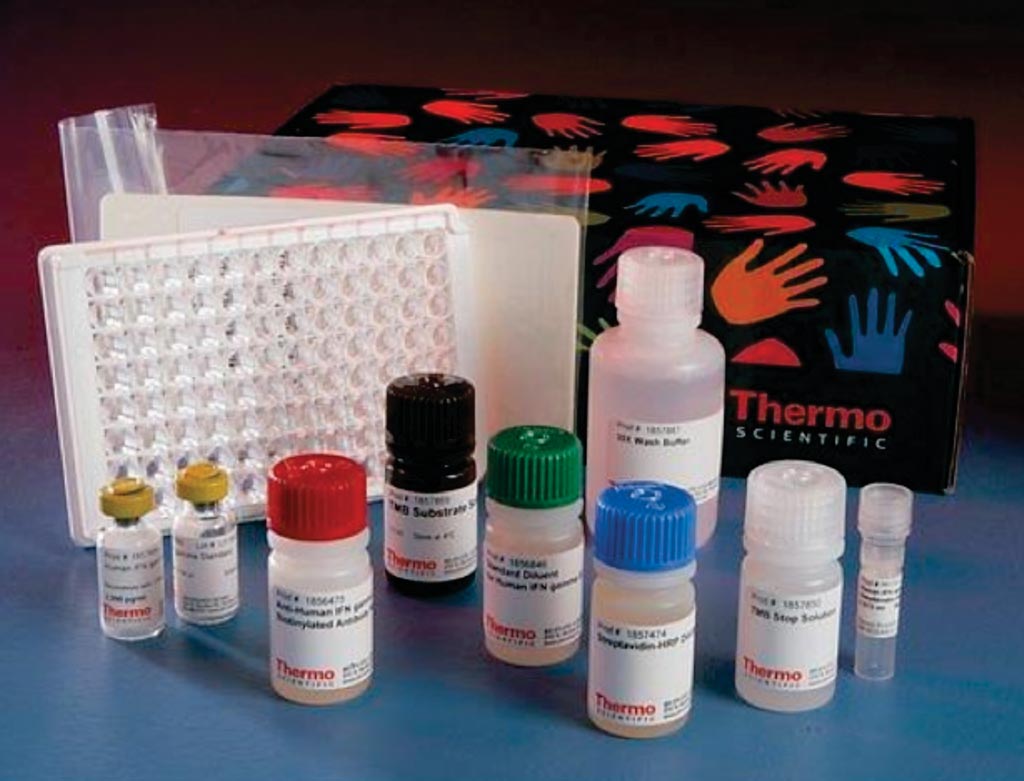 Image: An example of an ELISA test kit designed for quantitative determination of the concentration of human interleukin 6 (IL-6) in serum and plasma (Photo courtesy of Thermo Fisher Scientific).
A study of high school and college football players suggests that biomarkers in the blood may have potential use in identifying which players are more likely to need a longer recovery time after concussion.

A concussion is a mild traumatic brain injury (TBI). It can occur after an impact to the head or after a whiplash-type injury that causes the head and brain to shake quickly back and forth. A concussion results in an altered mental state that may include becoming unconscious.

A team of scientists associated with the Medical College of Wisconsin (Milwaukee, WI, USA) prospectively enrolled 857 high school and collegiate football players of whom 41 concussed athletes and 43 matched control athletes met inclusion criteria. None of the players lost consciousness with their concussions. All of the participants had blood tests at the beginning of the season. Those who had concussions had blood tests within six hours after the injury, then again 24 to 48 hours later and also eight, 15 and 45 days later. Those who did not have concussions had tests at similar times for comparison.

The blood tests looked at levels of seven biomarkers for inflammation that have been related to more severe brain injury that included serum levels of interleukin (IL)–6, IL-1β, IL-10, tumor necrosis factor, C-reactive protein, interferon-γ, and IL-1 receptor antagonist. Of the seven biomarkers, two were elevated for those with concussion at six hours after the injury compared to the athletes with no concussion. The biomarkers Il-6 and interleukin 1 receptor antagonist (IL-1RA) were both elevated at six hours after concussion.

Timothy B. Meier, PhD, an Assistant Professor in Neurosurgery and a senior author of the study, said, “With so many people sustaining concussions and a sizeable number of them having prolonged symptoms and recovery, any tools we can develop to help determine who would be at greater risk of problems would be very beneficial, so these results are a crucial first step.” The study was published on July 3, 2019, in the journal Neurology.