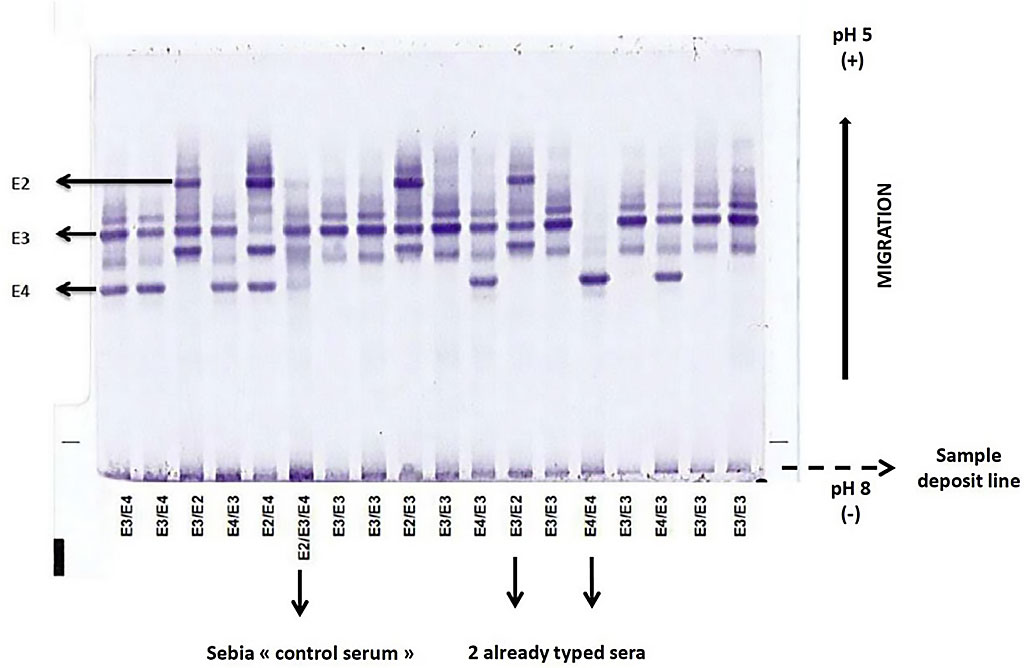 ApoE is a major component of lipoproteins which participates in the transport and clearance of lipids. ApoE4 status is a risk factor for Alzheimer’s and other neurodegenerative diseases, whereas apoE2 and also apoE4 increase the risk for cardiovascular disease.

A team of biochemists from the Sorbonne University (Paris, France) collected blood samples from 40 patients in the course of familial hypercholesterolemia screening or mixed dyslipidemia diagnosis. These patients had given their informed consent including genetic determination and APOE genotypes were already determined by Sanger sequencing of a polymerase chain reaction (PCR) fragment encompassing the two polymorphic sites (rs429358 and rs7412).

The scientists used the Hydragel 18 Apo E Isofocusing kit (Sebia, Lisses, France) which is a qualitative kit for detection and identification of the different apoE phenotypes. A ready-to-use agarose gel containing ampholytes (pH gradient: 5–8) is used to perform a semi-automatic electrophoresis on a Sebia Hydrasys 2 Scan, followed by a specific immunofixation with anti-apoE antiserum. The “apoE isofocusing visualization” kit included antiserum diluent, stock solutions of anti-apoE antiserum and peroxidase-labeled antibody, and reagent for revelation (TTF1 and TTF2 developing solutions).

The team reported that the sera from the genotyped patients included in the study allowed them to test the following isoforms: E3/E3 (18 sera), E3/E4 (16 sera), E2/E2 (four sera) and E4/E4 (two sera). All phenotypes tested were 100% concordant to the genetic isoforms, even if all the possible phenotypes are not found in their population. Precision of the technique was verified with the repeatability and the reproducibility tests for the different isoforms, since tests gave similar results. In addition, the reproducibility tests led them to perform three freezing-thawing cycles on serum samples and a 100% concordant interpretation with genotyping was maintained. There was no interference of hemolysis, glucose or hypertriglyceridemia at the respective concentrations of 45.3 μmol/L hemoglobin, 25.1 mmol/L glucose and 9.5 and 4.8 mmol/L triglycerides for the determination of the phenotype profile.

The authors concluded that this qualitative, semi-automatized method could yield a novel and simple tool to phenotype apoE isoforms. Validated on a cohort of patient samples with known genotype, it could be used either for screening and stratification of a patient cohort, or for clinical analysis when genetic material cannot be obtained. It could be a useful and supplementary tool helping the clinician in the diagnosis of dyslipidemic and neurodegenerative diseases. The study was published in the January 2020 issue of the journal Practical Laboratory Medicine.