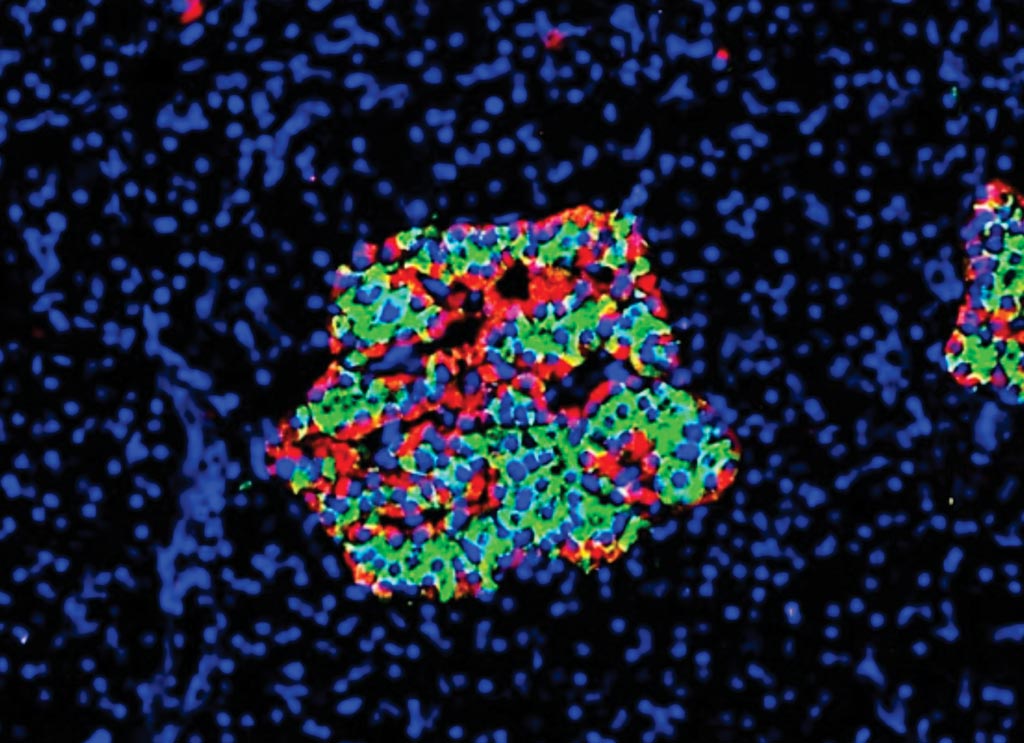 Image: Islet of Langerhans from the pancreas of a patient with chronic Type 1 diabetes of 19 years duration. A single lobe of the pancreas was found to contain islets rich in residual beta cells (alpha cells in red; beta cells in green) (Photo courtesy of Diapedia).
Beta cells in the pancreas produce insulin and their death is a key feature of Type 1 diabetes, and that loss starts long before diagnosis. However, there has been no straightforward way to measure that early loss.

An interdisciplinary team of scientists from the University of Alabama at Birmingham (Birmingham, AL, USA) showed that Type 1 diabetes-associated inflammatory cytokines, which induce beta-cell death, caused release of miR-204 from both cultured rat beta- cells and primary human pancreatic islets. To test miR-204 in humans, they looked at serum from people receiving autologous pancreatic islet transplantations. It is known that islet transplantation is associated with massive beta-cell death shortly after the transplantation. They found that miR-204 levels in serum rose sharply, 20 to 40 minutes after islet infusion.

The team reported the serum miR-204 found, correlated with remaining beta-cell function, as measured by the "gold standard" of mixed-meal stimulated C-peptide area under the curve. Serum miR-204 also showed good predictive diagnostic power in the context of early Type 1 diabetes, including the ability to differentiate adult recent-onset Type 1 diabetes from Type 2 diabetes. That is useful because adults with Type 1 diabetes are often misdiagnosed when first found to have diabetes.

Anath Shalev, MD, a Professor of Endocrinology and lead author of the study, said, “Having a non-invasive, straightforward method sensitive enough to detect early beta-cell loss, especially prior to the diagnosis of Type 1 diabetes, is critical in order to allow for any therapeutic intervention to be started as early as possible in the disease process and ideally before the majority of beta-cells has been destroyed.” The study was published August 13, 2019, in the American Journal of Physiology-Endocrinology and Metabolism.