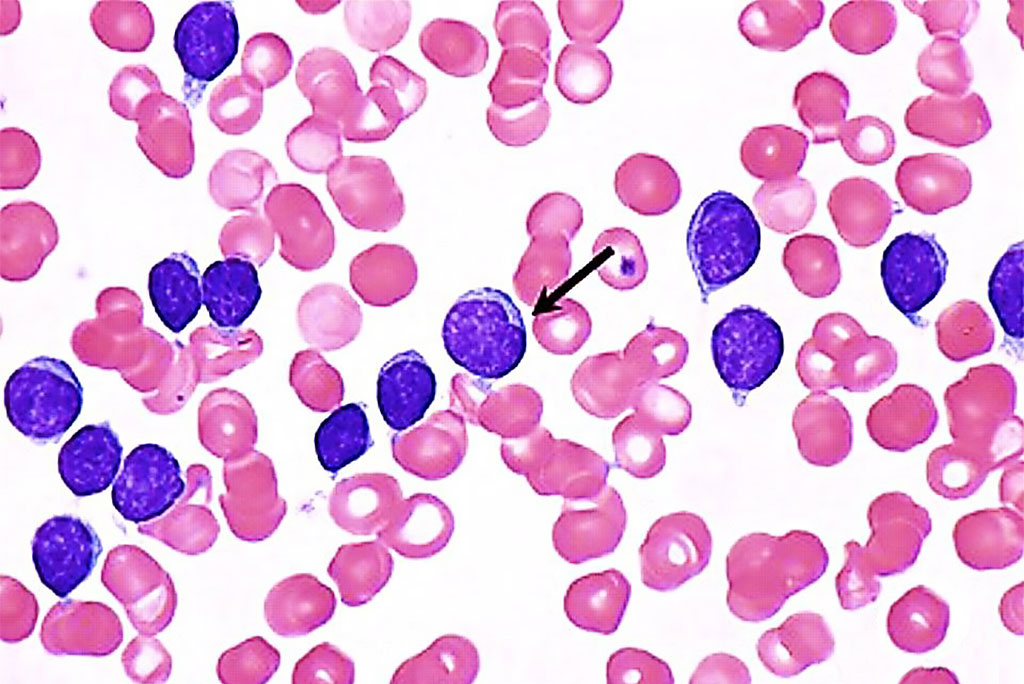 Image: Peripheral blood smear showing chronic lymphocytic leukemia (CLL). A large lymphocyte (arrow) has a notched nucleus and demonstrates the variable appearance of some of the lymphocytes in CLL (Photo courtesy of Peter Maslak)
Chronic lymphocytic leukemia (CLL) is a clonal disorder that results in the accumulation of morphologically mature-looking and immunologically incompetent lymphoid cells in the bone marrow, peripheral blood, and lymphatic tissues.

CLL is a heterogeneous disease as some patients may progress rapidly, even though they may fail to respond to therapy, and others may remain stable for years without any intervention, and this mirrors the genetic configuration and the epigenetic modification of different genes that lead to disease development, stability, progression, and response to different chemotherapeutic agents.

Scientists at the University of Duhok (Duhok, Iraq) carried out a case-control study including 54 newly diagnosed patients presenting with CLL as well as 30 normal individuals as controls from January 1, 2017 to July 30, 2018. Blood was collected from all enrolled individuals for hematological investigations as well as for molecular categorization of TP53 methylation status. Methylation-specific polymerase chain reaction (MS-PCR) technique was used to define the methylation status of the TP53 gene promoter that encompasses DNA extraction, bisulfite conversion, conventional PCR amplification, running on agarose gel and documentation. Amplification was performed using a 2729 PCR thermal cycler (Applied Biosystems, Foster City, CA, USA).

The scientists reported that all controls and 42 of 54 patients show unmethylated TP53 gene promoter; on the other hand, the methylated promoter was detected among 12 CLL patients. TP53 gene promoter methylation significantly linked to reduced platelet count and advanced stage at presentation. No significant differences were seen among both methylated and unmethylated TP53 promoters in relation to the age of the affected individuals, total white blood cell counts and hemoglobin level of the affected individuals.

The authors concluded that their study revealed that TP53 methylation contributes significantly to CLL development and progression. Further workups are recommended to study their relation with other genetic changes as malignancies are multifactorial and heterogeneous that arises from the interaction of different genetic changes. The study was published on November 25, 2019 in the Journal of Blood Medicine.