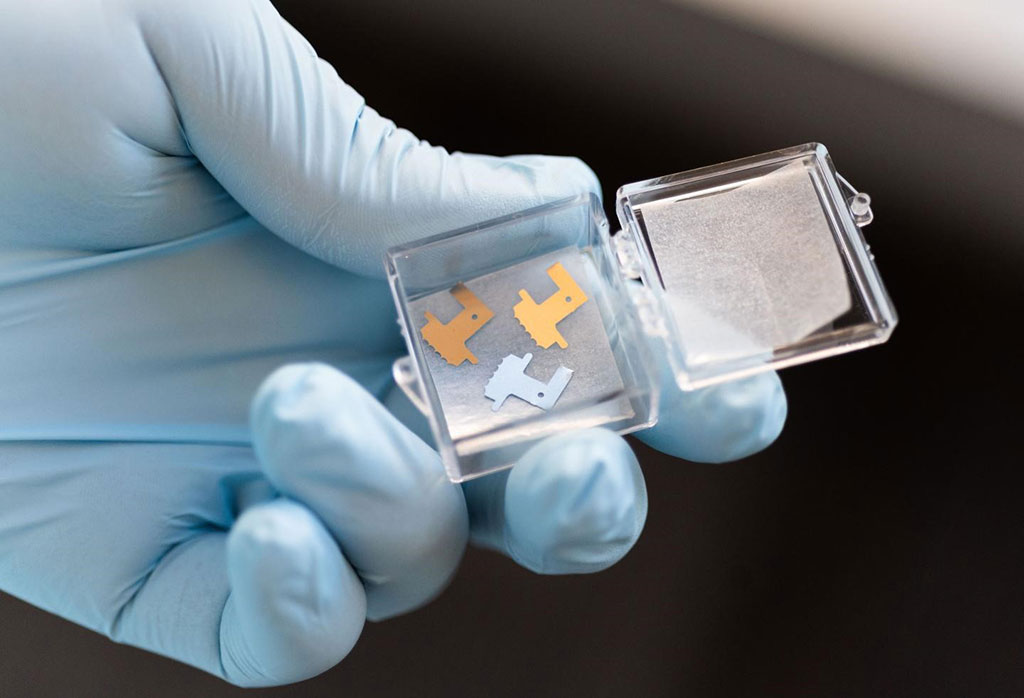 Image: Microneedle patches containing micron-scale needles are used to create temporary pores in the skin through which interstitial fluid can be extracted (Photo courtesy of Allison Carter, Georgia Tech).
Biochemical information about the body most commonly comes from analysis of blood, which represents only 6% of bodily fluids, but valuable information may also be found in other bodily fluids that are traditionally hard to get. Biofluids such as saliva, blood, urine, tears, and interstitial fluid (the fluid that surrounds cells) contain proteins and can be isolated for health monitoring.

Tissue interstitial fluid (ISF) surrounds cells and is an underutilized source of biomarkers that complements conventional sources such as blood and urine. However, ISF has received limited attention due largely to lack of simple collection methods. Using an array of tiny needles that are almost too small to see, scientists have developed a minimally-invasive technique for sampling ISF that could potentially provide a new source of information for routine clinical monitoring and diagnostic testing.

Biomedical Engineers and their colleagues associated with the Georgia Institute of Technology (Atlanta, GA, USA) used a patch containing five solid stainless-steel microneedles that were 254 µm in length. By pressing the patch at an angle into the skin of 50 human subjects, they created shallow micropores that reached only into the outer layer of skin containing ISF. The scientists then applied a suction to the area of skin containing the pores and obtained enough ISF to do three types of analysis. For comparison, they also took blood samples and obtained ISF using the older blister technique.

Many biomarkers used in current clinical practice were common to ISF and plasma. Because ISF does not clot, these biomarkers could be continuously monitored in ISF similar to current continuous glucose monitors, but without requiring an indwelling subcutaneous sensor. Biomarkers distinct to ISF included molecules associated with systemic and dermatological physiology, as well as exogenous compounds from environmental exposures. The overall extraction procedure took at total of about 20 minutes for each test subject. The procedure was well tolerated by the volunteers, and the microscopic pores healed quickly within a day with minimal irritation.

The team also determined the pharmacokinetics of caffeine and the pharmacodynamics of glucose, both small molecules, from the ISF, indicating that that dynamic biomarker information could be obtained from the technique. Those measurements suggested that ISF could provide a means for continuously monitoring of such compounds, taking advantage of the fact that the fluid does not clot.

Mark R. Prausnitz, PhD, a Professor of Chemical and Biomolecular Engineering and the senior author of the study, said, “Interstitial fluid originates in the blood and then leaks out of capillaries to bring nutrients to cells in the body's tissues. Because interstitial fluid is in direct communication with the cells, it should have information about the tissues themselves beyond what can be measured from testing the blood. This microneedle-based technique could provide a minimally-invasive and simple way to access this interstitial fluid to make it available for medical diagnostic applications.” The study was published on November 25, 2020 in the journal Science Translational Medicine.