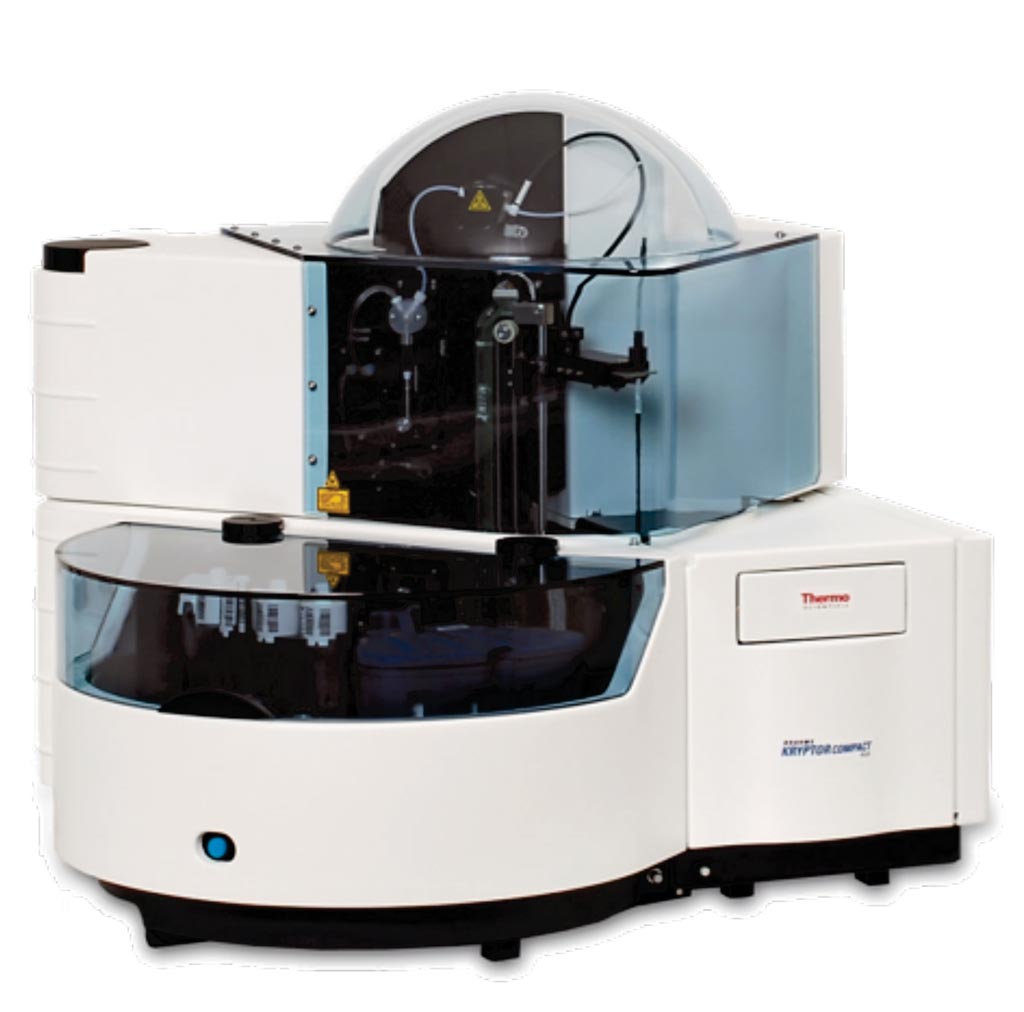 Image: The KRYPTOR compact PLUS fully automated random access immunoassay analyzer (Photo courtesy of BRAHMS).
Vasopressin (VP) is a hormone secreted by the pituitary gland in response to increased plasma osmolality, low plasma volume, and low blood pressure. Copeptin is a cleavage product of the C-terminal part of the VP precursor which correlates well with plasma VP concentrations and which is easier to measure reliably.

Scientists at the Sapienza University of Rome (Rome, Italy) recruited 60 consecutive obese subjects referring to our outpatient clinics at the University, who were all candidates to bariatric surgery as for clinical indication, and an additional study cohort of 60 non-obese controls with comparable age and sex, who were not affected by metabolic syndrome.

Venous blood sampling after 12-h fasting was performed in all the study participants for routine analyses and metabolic characterization. The team analyzed the blood for a comprehensive metabolic panel and a liver function panel. Fasting insulin (FBI, μΙU/mL) was measured by radioimmunoassay using ADVIA Insulin Ready Pack 100. Fasting copeptin was measured in plasma samples frozen immediately after separation and stored at − 80 °C for some weeks, using a KRYPTOR Compact Plus device and commercially available chemiluminescence sandwich immunoassay copeptin ProAVP kit with coated tubes. A minimum biopsy length of 15 mm or the presence of 10 complete portal tracts was required for clinical diagnosis.

The investigators reported that obese patients with biopsy-proven non-alcoholic fatty liver disease (NAFLD) (53%) had significantly higher copeptin levels than both obese individuals without NAFLD and non-obese subjects (obese/NAFLD 9.5 ± 4.9; obese/non-NAFLD 6.4 ± 2.6; and non-obese/non-NAFLD 7.4 ± 5.1 pmol/L). Plasma copeptin concentration positively correlated with hepatic macro- and micro-vesicular steatosis lobular inflammation and significantly increased throughout degrees of nonalcoholic steatohepatitis (NASH) severity, as expressed as absence, borderline, and overt NASH at the liver biopsy. Greater circulating copeptin predicted the presence of NASH with odds ratio (OR) = 1.73 after multivariate adjustment for age, sex, renal function and presence of T2DM and MS components.

The authors concluded that increased plasma copeptin is independently associated with the presence and severity of NAFLD and NASH, pointing to a novel mechanism behind human fatty liver disease potentially modifiable by pharmacological treatment and lifestyle intervention. The study was published on April 30, 2019, in the journal BMC Medicine.