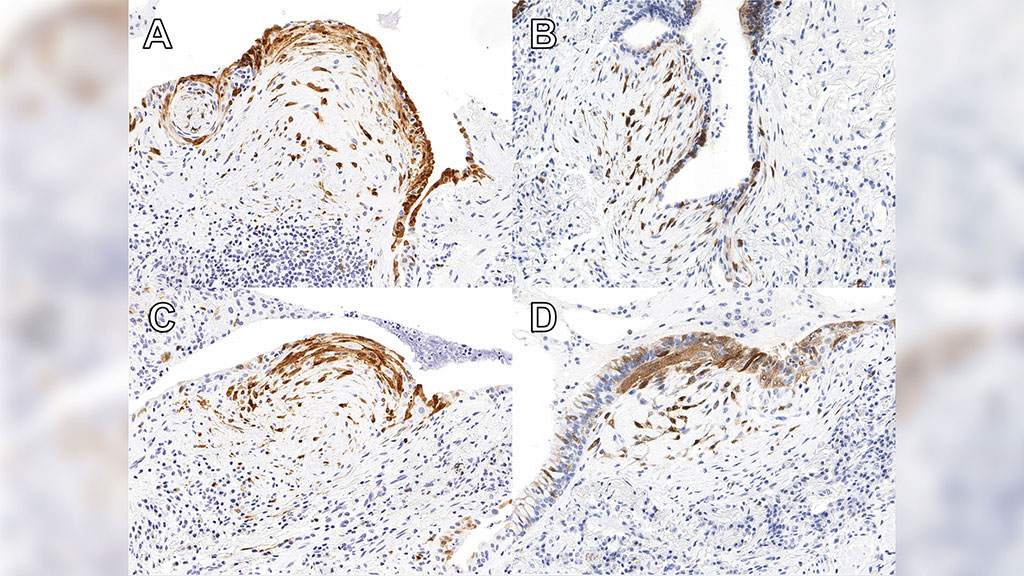 Image: p16-positive foci were defined as concurrent expression of p16 (brown) in loose collections of fibroblasts the overlying flat (A), simple cuboidal (B and C) or columnar epithelium (D) (Photo courtesy of Lawson Health Research Institute)

A team of Canadian respiratory disease researchers reported that the p16 (cyclin-dependent kinase inhibitor) protein could be used to diagnose patients with the serious lung disease idiopathic pulmonary fibrosis.

Idiopathic pulmonary fibrosis (IPF) is one of the most serious and common types of fibrotic interstitial lung diseases (ILDs), occurring most often in patients 60 years of age and older with an average survival time of three to five years. It is the number one reason for lung transplants. IPF is associated with increased expression of cyclin-dependent kinase inhibitors such as p16 and p21, and subsequent induction of cell cycle arrest, cellular senescence, and pro-fibrotic gene expression.

Investigators at Lawson Health Research Institute (London, ON, Canada) conducted a study that sought to link p16-expression with a diagnosis of IPF or other fibrotic interstitial lung diseases.

For this study, they first used surgical lung biopsy to identify 86 cases of fibrosing ILD. Immunohistochemistry for p16 was performed on sections with the most active fibrosis. Foci that were p16-positive (loose collection of p16-positive fibroblasts with overlying p16-positive epithelium) were identified on digital slides and quantified. Twenty-four areas including senescent foci, fibrotic, and normal areas were characterized using in situ RNA expression analysis with digital spatial profiling (DSP) in selected cases.

In this study, digital spatial RNA high-resolution profiling with the GeoMX platform was used for the first time in fibrotic ILD to explore transcriptional differences in fibroblastic foci versus fibrotic and normal-looking areas in IPF cases.

Results revealed that the presence of p16-positive foci was specific for the diagnosis of IPF, where 50% of cases expressed some level of p16 and 26% were p16-high. There was no relationship between radiographic pattern and p16 expression. However, there was increased expression of cyclin-dependent kinase inhibitors, collagens, and matrix remodeling genes within p16-positive foci, and cases with high p16 expression had shorter lung transplant-free survival. The DSP approach demonstrated that fibroblastic foci exhibited transcriptional features clearly distinct from that of normal-looking and even fibrotic areas.

Senior author Dr. Marco Mura, associate scientist at Lawson Health Research Institute, said, "We developed a method that is actually quite inexpensive to increase the diagnostic accuracy of the biopsy and help to avoid unclassifiable cases. The method has a prognostic value, so it helps predict survival of these patients at the time of biopsy. We have no tests that we can apply to the (lung) biopsy other than the pathologist looking at it and saying “OK, this biopsy shows this pattern”. There were absolutely zero additional biomarker tests to reinforce, validate, or support the diagnosis. So, this will be the first time that we implement such test biomarkers in clinical practice."

The study was published in the June 7, 2022, online edition of the journal Respiratory Research.