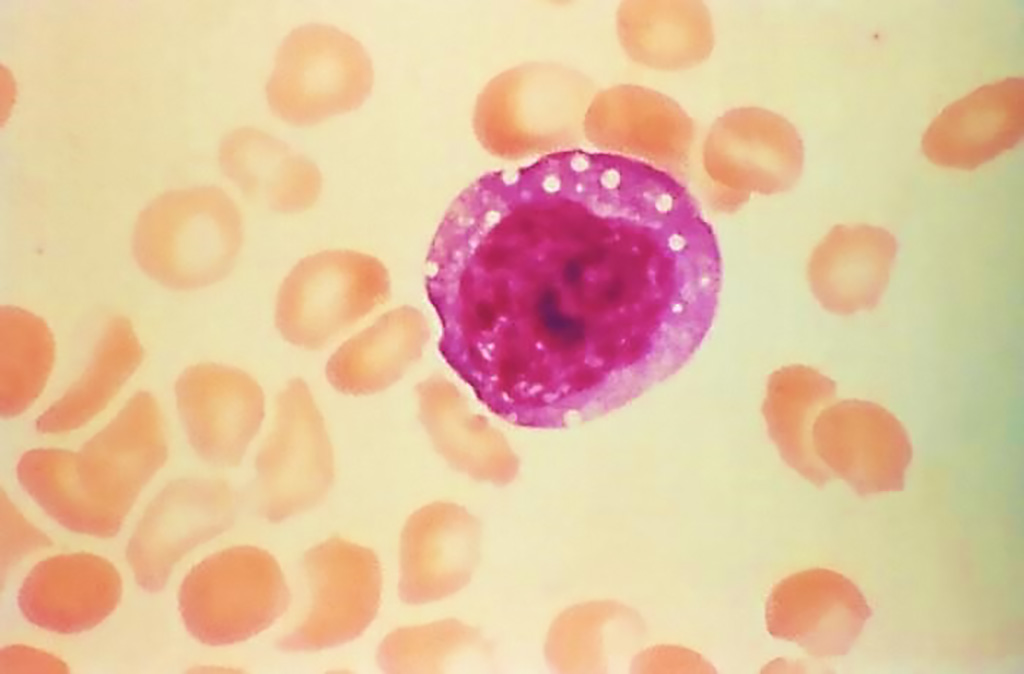 Image: This micrograph depicts an atypical, enlarged lymphocyte found in the blood smear from a hantavirus pulmonary syndrome (HPS) patient. This large atypical lymphocyte is an example of one of the laboratory findings, which when combined with a bandemia, i.e., immature white blood cells, and dropping platelet count, is characteristic of HPS (Photo courtesy of Centers for Disease Control and Prevention)
Hantavirus Pulmonary Syndrome (HPS) is a serious and often fatal disease caused by viruses known as hantaviruses. These anthropozoonotic diseases comprising of two clinical entities: Hemorrhagic Fever with Renal Syndrome (HFRS), which occurs in the Old World, and Hantavirus Pulmonary Syndrome (HPS) in the New World.

Laboratory diagnosis of HPS is often conducted by enzyme-linked immunosorbent assay (ELISA) for detection of immunoglobulin G (IgG) and IgM specific antibodies in serum or blood of suspected patients. Given that IgM antibodies are detectable early in the disease, IgM ELISA is considered the reference method for HPS diagnostics.

Scientists at the Evandro Chagas Institute (Ananindeua, Brazil) have developed real-time polymerase chain reaction (RT-qPCR) and semi-nested RT-qPCR assays for the diagnosis of HPS. The assays were developed for detection and quantification of four hantaviruses strains circulating in the Brazilian Amazon. assays were used to test two groups of samples: one comprising of 50 patients with disease and other containing samples from 50 healthy individuals according to IgM-ELISA results. A third group of 27 samples infected with other pathogens were tested for specificity analysis.

A consensus region in the N gene of these hantaviruses was used to design the primer sets and a hydrolysis probe. In vitro transcribed RNA was diluted in standards with known concentration. MS2 bacteriophage RNA was detected together with hantavirus RNA as an exogenous control in a duplex reaction. RT-qPCR efficiency was around 100% and the limit of detection was 0.9 copies/μL of RNA for RT-qPCR and 10 copies/μL of RNA for Semi-nested RT-PCR. There was no amplification of either negative samples or samples positive to other pathogens. Sample reactions were performed in triplicate in ViiA7 qPCR System (Applied Biosystems, Thermo-Fisher Scientific, Waltham, MA, USA).

The investigators reported that the RT-qPCR was more sensitive than semi-nested RT-PCR, being able to detect three samples undetected by conventional RT-PCR. RT-qPCR clinical sensitivity, specificity and general accuracy values were 92.5%, 100% and 97.63%, respectively. Taken together, these results indicate that both RT-qPCR and Semi-nested RT-PCR assays are efficient, sensitive and specific tools for genome detection of hantaviruses circulating in the Amazon region. In addition to being more sensitive, RT-qPCR offers other advantages such as agility in generating results, about three times faster than conventional assays and automation capability which leads to lower risk of contamination and greater reproducibility. The study was published on December 26, 2019 in the journal Public Library of Science Neglected Tropical Diseases.