Resilient Bacteria May Be Treatable with Currently-Available Therapies 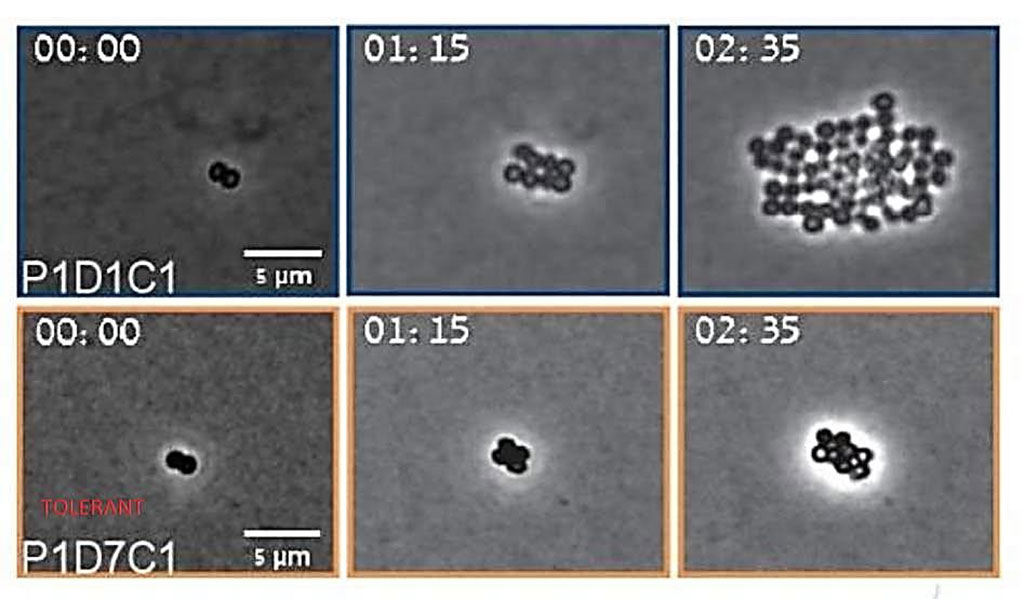 Image: Methicillin-resistant Staphylococcus aureus (MRSA) growing normally in upper panel and tolerant to an antibiotic in lower panel (Photo courtesy of Nathalie Balaban and Jiafeng Liu).
Bacteria develop defenses against hostile elements in their environment. One common tactic is "tolerance," that is, lying dormant during antibiotic treatment. In this way, bacteria evade antibiotic treatment because antibiotics can only spot and kill growing targets.

However, this intermediary stage called "antibiotic tolerance" lasts only a few days and cannot be detected in standard medical laboratories. Therefore, doctors miss the tolerance window and with it the opportunity to treat a serious infection before it becomes altogether resistant. This short window does not affect most healthy adults, but for those patients fighting off a blood infection with a weakened immune system, this window is critical and could mean the difference between life and death.

Scientists at The Hebrew University of Jerusalem (Jerusalem, Israel) and their colleagues developed a mathematical model that successfully described, measured and predicted when bacteria would develop tolerance to a particular antibiotic. Further, they observed that when bacteria developed tolerance to one antibiotic, they were more likely to develop tolerance to other antibiotics in the cocktail. They have analyzed daily bacterial samples from hospitalized patients with life-threatening, persistent methicillin-resistant Staphylococcus aureus (MRSA) infections.

The investigators detected the rapid emergence of tolerance mutations, followed by the emergence of resistance, despite the combination treatment. Evolution investigations on the clinical strains in vitro revealed a new way by which tolerance promotes the evolution of resistance under combination treatments. Further, in the study, under different antibiotic classes reveal the generality of the effect. The team believes that the same evolutionary processes involved in the development of antibiotic tolerance and resistance are likely at play in cancer and might be used to inform treatment. For example, tumor cells might first become tolerant of chemotherapy, develop resistance to it, and then develop resistance to other cancer drugs, as well.

Nathalie Q. Balaban, PhD, a professor and the senior author of the study, said, “We observed that bacteria acquired tolerance within a few days. These tolerance mutations then acted as a stepping stone to acquire resistance and, ultimately, treatment failure. Using the right combination of available antibiotic drugs at the outset could dramatically increase a patients' survival rate before their infection becomes tolerant to all the antibiotics in our arsenal.” The study was published on January 10, 2020 in the journal Science.

The Hebrew University of Jerusalem