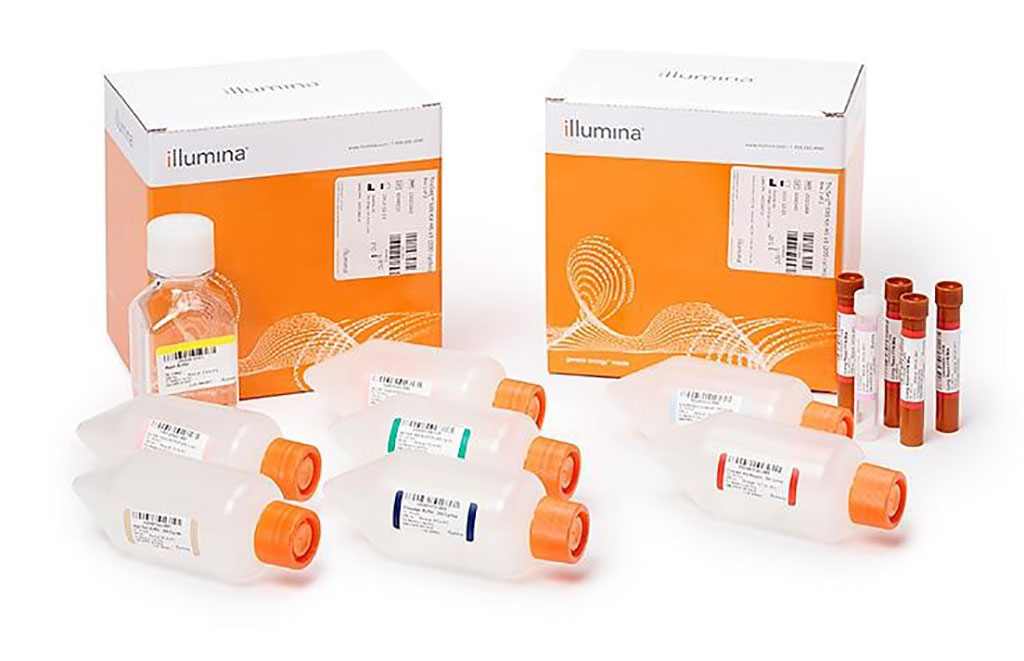 Image: HiSeq X Reagent Kits support high coverage whole-genome sequencing (WGS) with the HiSeq X Series of sequencing systems (Photo courtesy of Illumina)
Inflammatory processes are associated with a large range of human diseases, including rheumatic diseases and allergies. The role of inflammation in the development and progression of disease is of great medical, scientific and public health interest.

Protein biomarkers are measurable molecules that can have a prognostic value in patients, be used to diagnose disease, or indicate severity of disease. Today, a large number of plasma proteins have been identified as potential biomarkers for inflammatory diseases, where they are often highly expressed in patients with the disease.

Immunologists at Uppsala University (Uppsala, Sweden) used a method called Mendelian Randomization to identify protein biomarkers that have a direct causal effect on protecting or promoting disease development. A total of 719 individuals from Karesuando and 350 individuals from Soppero county of Norrbotten, Sweden were recruited in 2006 and 2009. For each participant, blood samples were taken and serum and plasma were separated and immediately frozen and stored at −70 °C.

The protein levels for 92 putative biomarkers of inflammation had been measured using the Proseek Multiplex Inflammation panel (Olink, Uppsala, Sweden) and the protein extension assay. Briefly, an affinity-based assay is used with pairs of oligonucleotide-labeled antibody probes that bind to each of the targeted proteins. If both antibodies bind in close proximity, a polymerase chain reaction (PCR) target is produced and quantified using standard real-time PCR. A total of 1,041 samples from a survey were sequenced using Illumina X-ten short read technology (Illumina, San Diego, CA, USA) to 30× coverage per individual. The scientists also selected a set of 18 inflammatory diseases, for which at least 1,000 participants had a reported diagnosis in the UK Biobank (UKB), were analyzed in the study.

The team reported that almost one hundred protein biomarkers, previously associated with inflammatory disease, were targeted in the current study. The study showed that interleukin-12B (IL-12B) protects against psoriasis and psoriatic arthropathy, Latency Associated Peptide (Transforming growth factor β-1) (LAP TGF-β-1) against osteoarthritis, TNF-like weak inducer of apoptosis (TWEAK) against asthma, Vascular endothelial growth factor A (VEGF-A) against ulcerative colitis, and Lymphotoxin-alpha (LT-α) against both type 1 diabetes and rheumatoid arthritis. Only one biomarker was found to have a damaging effect, namely IL-18R1, which increased the risk of developing allergy, hay fever and eczema.

Weronica E. Ek, PhD, an associate professor of Immunology, Genetics and Pathology and lead author of the study, said, “Surprisingly, we found that a larger fraction of the proteins investigated actually protect against disease development, rather than increasing the risk of disease. Our results suggest that, in healthy individuals, such proteins are expressed to protect against tissue damage.” The study was published on December 8, 2021, in the journal Science Advances.