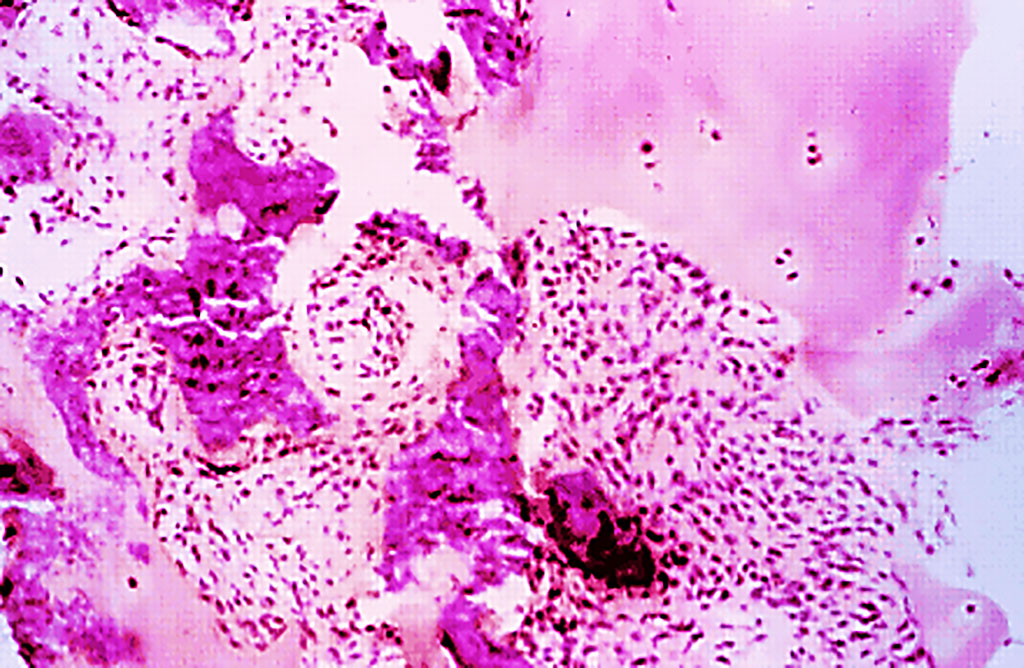 Image: Sacroiliac joint biopsy specimen of a 29 year old male patient with ankylosing spondylitis. The biopsy specimen shows a subchondral cellular infiltrate partly invading the cartilage. Fibroblasts and activated lymphocytes are seen in the infiltrate. In between are areas of calcification and bone formation (Photo courtesy of Professor J. Braun).
Ankylosing spondylitis (AS) is a systematic inflammatory autoimmune disease that primarily involves the spine and sacroiliac joints. Typically the joints where the spine joins the pelvis are also affected and occasionally other joints such as the shoulders or hips are involved. Back pain is a characteristic symptom of AS, and it often comes and goes.

Rheumatologists and Immunologists at the Guangdong Second Provincial General Hospital (Guangzhou, China) performed a retrospective study that included 135 AS patients that visited from March 2016 and June 2019. Seventy-six age- and sex-matched healthy subjects from the Department of Physical Examination Center who had no evidence of illness were enrolled in the control group at the same period.

The investigators reported that AS patients showed higher FAR levels than the controls. FAR was also increased in active group of AS patients than those in inactive group. Spearman analyses showed that FAR was positively related with Bath Ankylosing Spondylitis Disease Activity Index (BASDAI) in AS patients. ROC curve analyses revealed that the AUC of FAR was higher than ALB and Fib. In addition, the optimal cutoff value of FAR for AS diagnosis was 78.84, with a specificity of 88.2% and sensitivity of 77.0%. Logistical regression analyses showed that FAR (odds ratio = 13.091) was a predictor for AS disease activity.