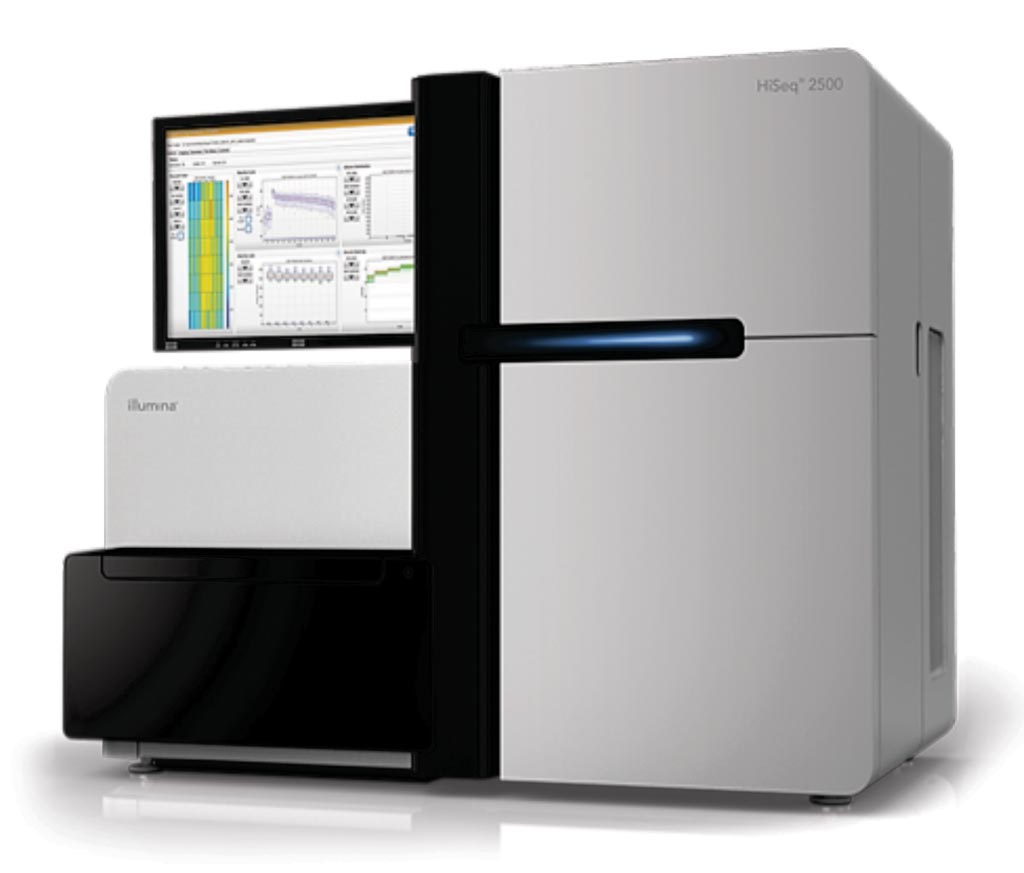 Image: The HiSeq 2500 System is a powerful high-throughput sequencing system (Photo courtesy of Illumina).
Failure to predict and understand the causes of preterm birth, the leading cause of neonatal morbidity and mortality, have limited effective interventions and therapeutics. Preterm birth (PTB) is defined as birth before 37 completed weeks of gestation and is the leading cause of death in neonates and children under the age of 5.

A group of scientists collaborating with the University of Maryland School of Medicine (Baltimore, MD, USA) enrolled within 2,000 pregnant women, and identified a few hundred women for a nested case-control study of spontaneous preterm birth (sPTB), a group that included 107 extensively phenotyped women who gave birth prior to 37 weeks of gestation and 432 unaffected women who delivered their babies at term. Nearly three-quarters of the participants were African-American, and the median age of the mothers was 28 years old. The investigators had access to cervicovaginal swab samples and anthropometric measurements collected at three points during pregnancy: at 16 to 20 weeks gestation, 20 to 24 weeks gestation, and between 24 and 28 weeks gestation.

Amplicons were visualized on a 2% agarose gel, quantified, pooled in equimolar concentration, and purified prior to loading on an Illumina HiSeq 2500 modified to generate 300 bp paired-end reads. When the scientists compared microbial community members in cervicovaginal samples from those cases and controls, which were profiled with 16S ribosomal RNA gene sequencing, they saw seven bacterial taxa that appeared to be associated with spontaneous preterm birth, particularly in women with African-American ancestry. The team studied that association further using enzyme-linked immunosorbent assay (ELISA)-based immunological profiling, focused on host-derived anti-microbial peptides known as beta-defensin-2, that have previously been described in studies of the genital tract, both in healthy women and those suffering from bacterial infections.

The author concluded that higher vaginal levels of β-defensin-2 lowered the risk sPTB associated with cervicovaginal microbiota in an ethnicity-dependent manner. Surprisingly, even in Lactobacillus spp. dominated cervicovaginal microbiota, low β-defensin-2 was associated with increased risk of sPTB. Their findings hold promise for diagnostics to accurately identify women at risk for sPTB early in pregnancy. The study was published on March 21, 2019, in the journal Nature Communications.