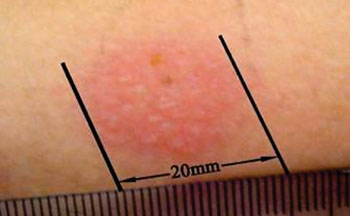 Image: A strongly positive Mantoux tuberculin skin test (Photo courtesy of Mudnsky).
A new skin test for tuberculosis infection has been tested and has proven safe, easy to administer and accurate in two Phase III clinical trials. The test is administered like a tuberculin skin test (TST), and results are interpreted by measuring the size of the skin induration two or three days later.

The test, known as C-Tb, combines the field friendliness of the purified protein derivative PPD-based tuberculin skin test with the high specificity of interferon gamma release assays, or IGRAs. Introduced a decade ago, IGRAs have high specificity, producing few false positives, but require blood samples and complicated laboratory work, which has limited their widespread use.

Scientists at the Statens Serum Institut (Copenhagen, Denmark) colleagues conducted a double-blinded study of C-Tb, which measures the body's immune response to two TB antigens, EAST-6 and CFP10, in 979 participants enrolled at 13 clinical trial sites in Spain. Participants, all adults, ranged in TB status from presumed uninfected through intermediate and high risk of latent TB to active disease. The investigators found that both C-Tb and the IGRA had a specificity of 97 %; C-Tb was highly concordant to IGRA in 95% of study participants; and the specificity of C-Tb, unlike the TST, was not impacted by the BCG vaccine, the partially effective vaccine that many residents in the developing world receive. TST specificity in this group was only 62%.

In the second double-blinded trial, the scientists were primarily concerned with testing how accurate C-Tb was in HIV-positive patients and in young children, populations in which the accuracy of the TST and the IGRA is known to be compromised. The study, conducted in South Africa, enrolled 1,090 participants, including 299 patients with human immunodeficiency virus (HIV) and 402 children as young as 28 days. Among participants with HIV, the ability of all three tests to detect TB infection was diminished, though the C-Tb appeared more robust in HIV-infected participants with low CD4 T cell counts and among children under 5, C-Tb was comparable with the other two tests in identifying those infected.

Morten Ruhwald, MD, PhD, head of human immunology at Statens Serum Institut, said, “Another advantage of C-Tb is that the measurement of infection, a 5 mm or larger induration, is universal across patients with different risk factors, including HIV infection. With TST, the size of the induration is often adjusted to increase its accuracy in measuring infection in different patient populations.” The study was presented at the American Thoracic Society (ATS) international conference held May 19-24, 2016, in Washington, DC, USA.