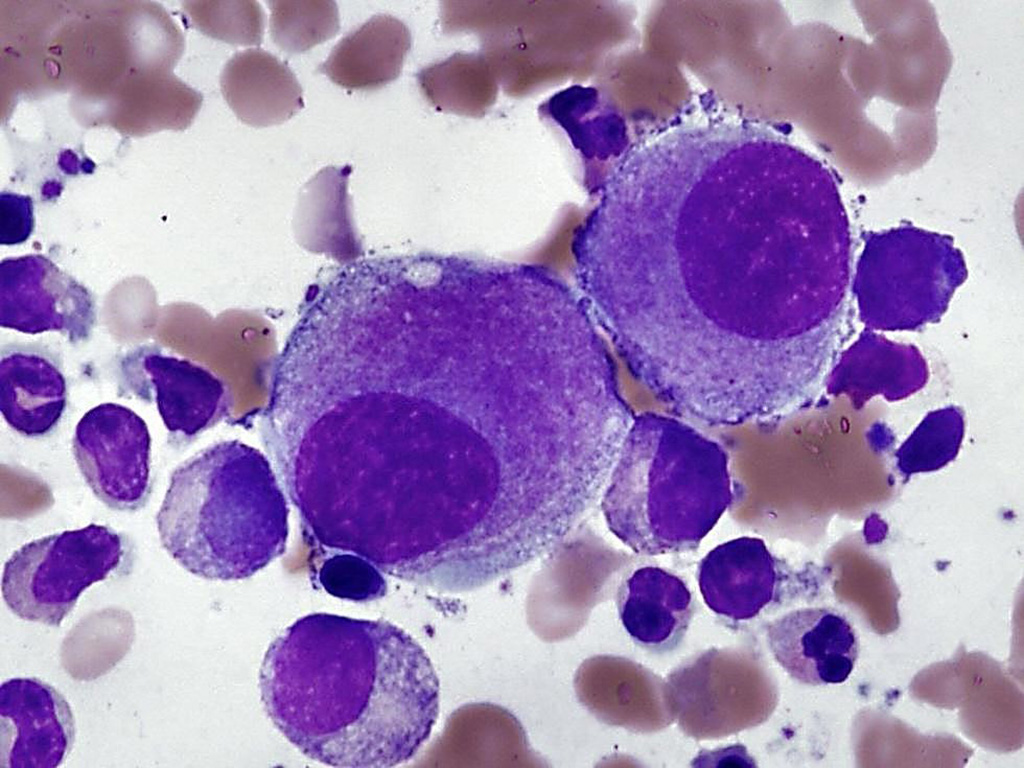 Image: Bone marrow film from a patient with myelodysplastic syndrome demonstrates small hypolobated megakaryocytes that are typical of the syndrome with isolated del(5q) (Photo courtesy of John P. Hunt, MD)
Myelodysplastic syndrome is a premalignant disease that affects myeloid cell. It is a precursor to acute myeloid leukemia, an aggressive blood cancer caused by the accumulation of immature blood cells.

The increased use of sequencing in the past decade has improved the field's understanding of the genetic mutations that cause myelodysplastic syndrome (MDS) and acute myeloid leukemia (AML), but for the most part, those data have not been integrated with expression data.

Scientists from St. Jude Children's Research Hospital (Memphis, TN, USA) and their colleagues conducted whole-genome sequencing and transcriptomic analysis via RNA-seq of cancer samples from more than 1,300 adult patients, nearly 600 with AML and around 700 with MDS and looked at how detected genetic variants tracked with gene expression patterns, patients' clinical disease features, and outcomes.

The team was able to confirm the diagnosis of 11% of patients where AML was due to recurrent genetic abnormalities according to the World Health Organizations' classifications. The investigators also identified more than 7,000 variants (including somatic and germline mutations, chimeric fusions, and structural variants) in 839 genes, around a third of which were potential driver genes. Patients harbored between one and 18 mutations, and averaged five mutations. Some genetic mutations overlapped between the two diseases, but were more frequent in one setting than the other. For example, NPM1 mutations occurred in 27% of AML and around 1% of MDS cases.

The investigators showed that while AML cases had gene expression profiles that clustered with specific mutational patterns, expression profiles of MDS patients were not as variable even though they also had a complex landscape of mutations. Around 27% of MDS cases had mutations in SF3B1, which did not show up in 14% of patients with SFRS2 mutations and 6% of cases with U2AF1 mutations. Additionally, around 14% of MDS cases had TP53 mutations and 11% had RUNX1 mutations, which occurred with mutations in epigenetic regulators and were associated with patient outcomes.

Ilaria Iacobucci, PhD, the senior author of the study, said, “This study, for the first time, provides a very detailed description of how different mutations cooperate together, and shows how this can be used to stratify patients by cataloging different mutations and correlating them with outcome.” The study was presented at the at the American Society of Hematology annual meeting held December 7-10, 2019 in Orlando, FL, USA.