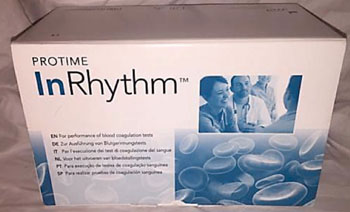 Scientists at the University of Milan (Italy) compared a POC- INR device versus the laboratory INR measurement for blood samples from 29 APS-positive and 31 APS-negative patients consecutively enrolled. Chromogenic factor X assay was used to evaluate anticoagulation. Bland–Altman difference plot for paired INR (POC versus laboratory) was used to evaluate agreement between the device and the laboratory method. The device INR relationship with factor X chromogenic assay was evaluated by orthogonal regression analysis.

The team evaluated the accuracy of the ProTime InRhythm System (International Technidyne Corporation, Piscataway, NJ, USA), which consists of an instrument and disposable cuvettes. Each cuvette consists of two PT microchannels containing human recombinant thromboplastin to analyze a patient’s sample in duplicate to ensure accurate results, and a third internal control channel that is activated each time a test is performed to verify the integrity of the reagents and proper test procedure.

The scientists found that overall, 97% of the POC device INR measurements were similar to laboratory INR values with an absolute difference less than 0.4 units. Correlation coefficient for the device INR versus factor X was −0.69, (CI 95% −0.80 to −0.52). The authors concluded that The ProTime InRhythm System is an accurate point-of-care device for measuring INR also in patients with and without APS. The study was published in the October 2016 issue of the International Journal of Laboratory Hematology.