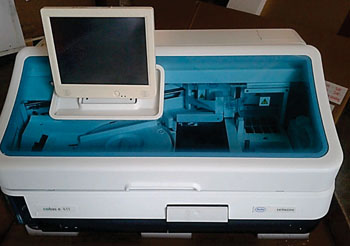 Image: The Cobas e 411 immunoassay analyzer (Photo courtesy of Roche Diagnostics).
There are presently no biomarkers that can predict the incidence of dengue shock and/or organ failure, although the early identification of risk factors is important in determining appropriate management to reduce mortality.

Mortality rates among patients who have been hospitalized with severe dengue are 1.6% to 10.9%, and death in adults is mainly due to the development of dengue shock and organ dysfunction. The prognostic value of serum procalcitonin (PCT) and peripheral venous lactate (PVL) levels as biomarkers of dengue shock and/or organ failure have been evaluated.

Scientists at Mahidol University (Bangkok, Thailand) conducted a prospective observational study among adults hospitalized for confirmed viral dengue infection between October 2013 and July 2015. Of 160 patients with dengue, 128 (80.0%) patients had dengue without shock or organ failure, whereas 32 (20.0%) patients developed dengue with shock and/or organ failure. Laboratory tests were conducted at admission, including a complete blood count and blood chemistry assessment, and samples for the measurement of PCT and PVL were collected.

The authors concluded that a PCT equal to or greater than 0.7 ng/mL and a PVL equal to or greater than 2.5 mmol/L were independently associated with dengue shock and/or organ failure. The combination of PCT and PVL levels could be used as prognostic biomarkers for the prediction of dengue shock and/or organ failure. The study was published on August 26, 2016, in the journal Public Library of Science Neglected Tropical Diseases.