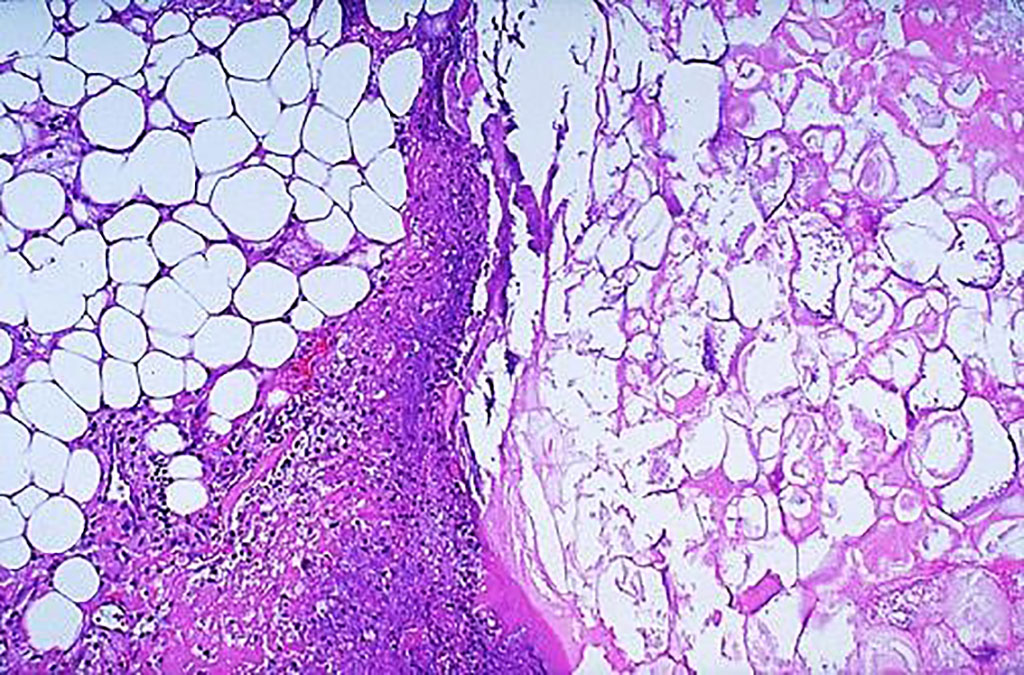 Image: Histology of acute pancreatitis. Microscopically, the fat necrosis consists of steatocytes (adipocytes) that have lost their nuclei and whose cytoplasm has a granular pink appearance as seen on the right. Some hemorrhage is seen at the left in this case of acute pancreatitis (Photo courtesy of Texas A&M University)
Acute pancreatitis (AP) is an inflammatory reaction caused by the activated pancreatic enzymes in the pancreas, which leads to subsequent pancreatic autodigestion, edema, hemorrhage, necrosis, and even distal organ dysfunction.

Conventional biomarkers such as amylase, lipase, C-reactive protein (CRP), and leukocytes are less specific in assessing the severity of AP. Control of the systemic inflammatory response is a key factor in the prognosis of AP; thus, pro-inflammatory markers can be mined as potential diagnostic and prognostic indicators of AP.

Clinical Laboratorians at the Zhejiang University School of Medicine (Hangzhou, China) included in a study 451 participants, including 343 AP patients and 108 healthy controls. According to the clinical outcome within 28 days, all patients were divided into the deceased group and survival group, while the survival group included four subgroups based on the clinical manifestations: pancreatic infection and necrosis, pancreatic tissue accumulation, extrapancreatic infection, and new-onset diabetes, some of which overlapped with each other.

The investigators reported that a statistically significant increase in the mean plasma analyte levels was detected in the study group compared to the control group. Multivariate comparison showed that plasma levels of PCT, HBP, and IL-6 were all significantly different among the three groups at different sampling times (1st, 3rd, 7th, and 10th day of admission). The combination of the three indicators had significantly higher diagnostic value than either the individual markers or pairwise combinations. The levels of the three were all significantly higher in severe acute pancreatitis (SAP) patients than in non-SAP patients. The patients with high levels had a worse prognosis than those with low levels.

The authors concluded that the combined detection of plasma PCT, HBP, and IL-6 provided a new idea for the diagnosis of patients with AP; increased concentrations of PCT, HBP, or IL-6 within three days of admission were associated with AP severity and poor prognosis; high concentrations of PCT, HBP, or IL-6 may be the useful predictors of SAP and the independent risk factors for AP. The study was published on June 21, 2021 in the Journal of Clinical Laboratory Analysis.