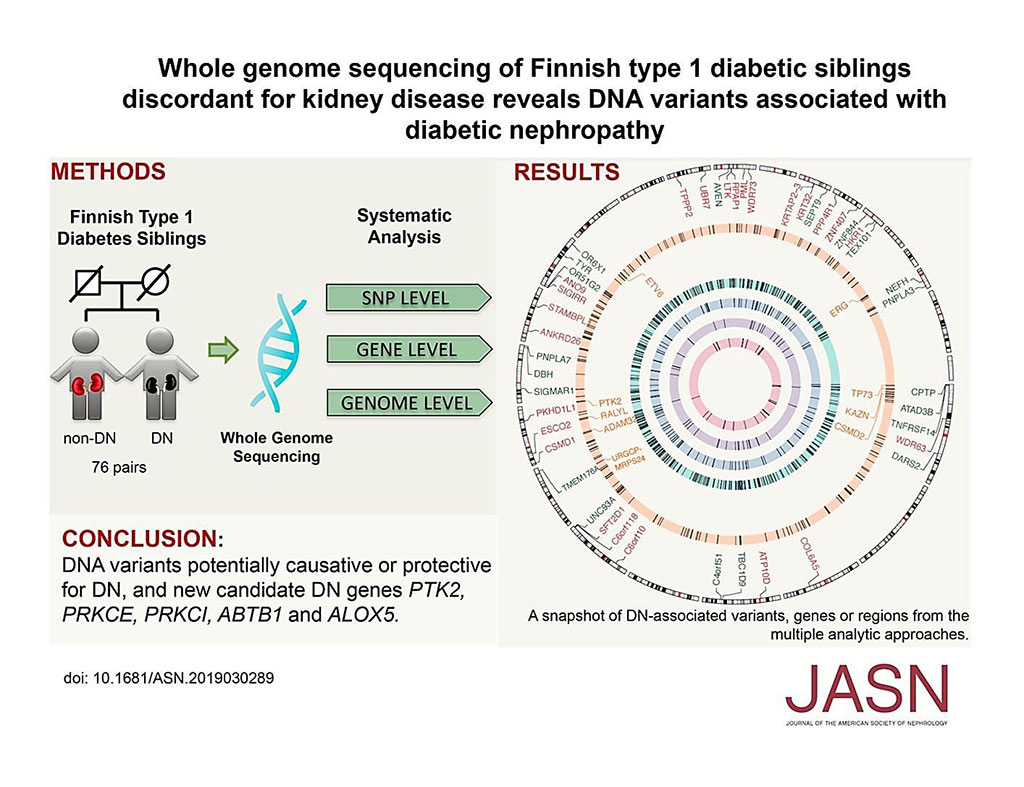 Image: Whole-Genome Sequencing of Finnish Type 1 Diabetic Siblings Discordant for Kidney Disease Reveals DNA Variants associated with Diabetic Nephropathy (Photo courtesy of Duke University).
Diabetic kidney disease is a serious complication that develops in some people with both Type 1 and Type 2 diabetes. It affects the kidneys' ability to filter extra water and waste products from the body and leads to high blood pressure, swollen extremities, loss of concentration, fatigue and could end in kidney failure.

An international team of Medical Biochemists and others collaborating with the Duke University (Durham, NC, USA) compared the genomes of 76 Finnish sibling pairs, where both siblings had Type 1 diabetes for more than 15 years, but only one had developed diabetic kidney disease. They looked for differences between the siblings at the genome, gene, and single mutation level. They then validated their results by analyzing the genes of more than 3,500 unrelated Finns with Type 1 diabetes, almost 40% of whom had diabetic kidney disease.

The team observed protein-altering variants and an enrichment of variants in regions associated with the presence or absence of diabetic nephropathy. The replication cohort confirmed variants in both regulatory and protein-coding regions. They also observed that diabetic nephropathy–associated variants, when clustered at the gene level, are enriched in a core protein-interaction network representing proteins essential for podocyte function. These genes include protein kinases (protein kinase C isoforms ε and ι) and protein tyrosine kinase 2.

Karl Tryggvason, MD, PhD, a professor and senior author of the study, said, “Our analyses revealed several genes that could be involved in the development of the disease by coding for mutations in protein-modifying enzymes belonging to a large family of proteins called protein kinase C.” The study was published in the February 2020 issue of the Journal of the American Society of Nephrology.