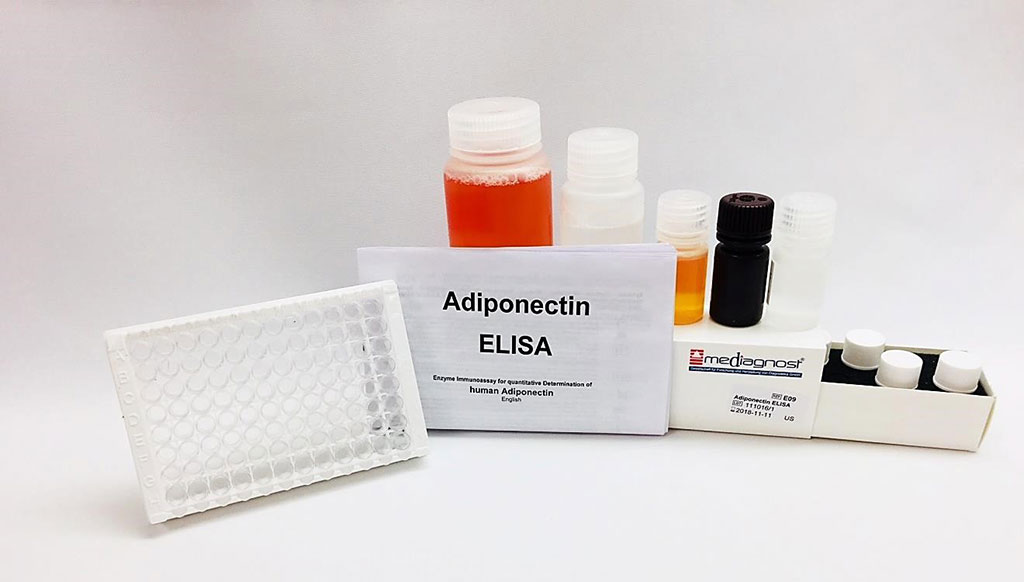 Image: A Total Adiponectin ELISA Assay Kit: higher serum adiponectin concentration has been independently associated with incident cancer and cancer-related deaths in type 2 diabetes (Photo courtesy of Mediagnost).
Adiponectin is a protein hormone that modulates a number of metabolic processes, including glucose regulation and fatty acid oxidation. Adiponectin is secreted from adipose tissue, and also from the placenta in pregnancy, into the bloodstream and is very abundant in plasma relative to many hormones.

Despite the beneficial cardiometabolic effects of adiponectin demonstrated in preclinical studies, paradoxically higher circulating adiponectin concentrations have been found in epidemiological studies to be associated with incident cardiovascular events, renal outcomes, and mortality in patients with diabetes.

The authors concluded that higher serum adiponectin concentration was independently associated with incident cancer and cancer-related deaths in type 2 diabetes, indicating that adiponectin paradox can be observed in another major diabetic complication in addition to cardiovascular and kidney diseases.

Karen Lam, MD, professor of medicine and the senior author of the study, said, “Although adiponectin, a hormone from the fat cells, has been reported to protect against cancers in animal studies, mostly in mice, higher levels of adiponectin paradoxically predicted the development of cancer and death due to cancers in this study of more than 5,000 people with diabetes”. The study was published online on February 19, 2020 in The Journal of Clinical Endocrinology & Metabolism.