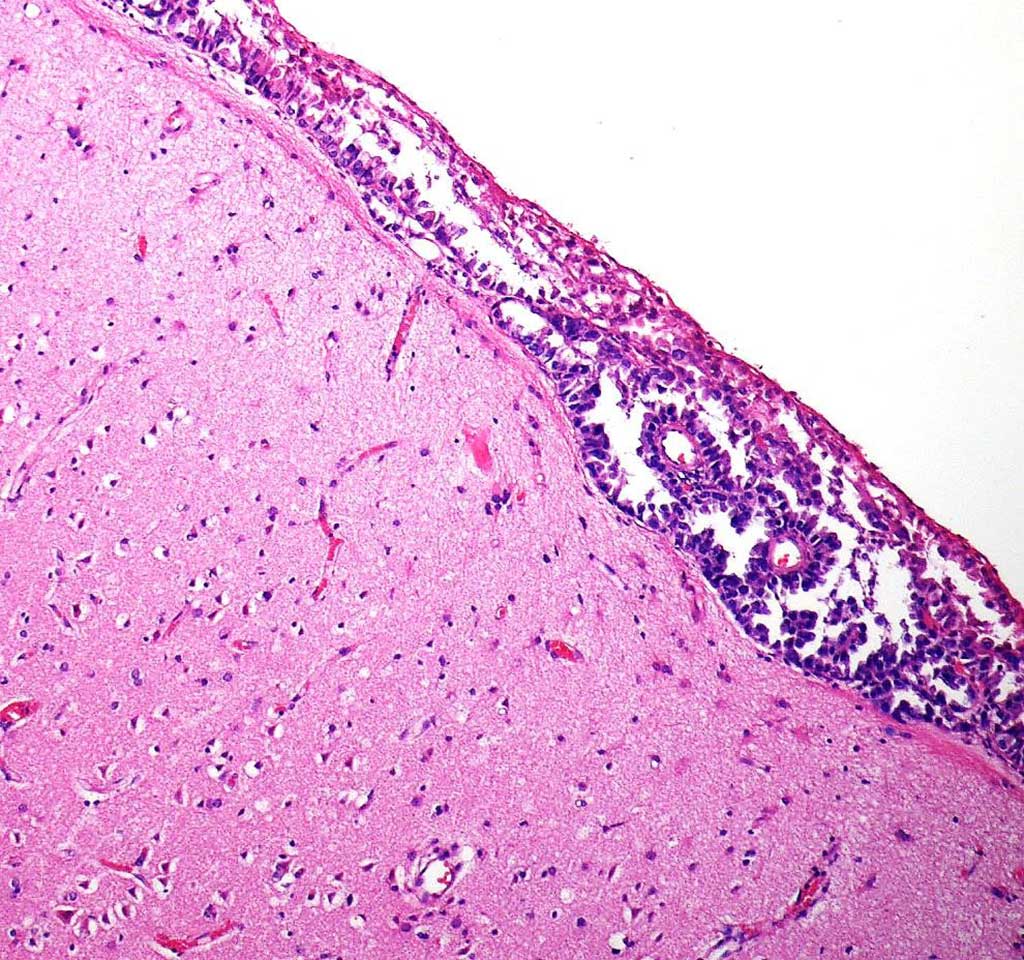 Image: Histopathology of Leptomeningeal Melanoma Metastases: tumor cell clusters in the subarachnoid space in a brain biopsy (Photo courtesy of selbst).
Patients with advanced melanoma who develop metastases in the leptomeninges, the fluid filled membranes surrounding the brain and spinal cord, have an extremely poor prognosis. Most patients only survive for eight to 10 weeks after diagnosis.

Cancer development and progression are highly regulated by intricate interactions between cancer cells and the surrounding environment. Melanoma cells that invade and metastasize into the leptomeninges interact with the surrounding cerebrospinal fluid. One reason for the poor prognosis is that very little information is known about the molecular development of leptomeningeal melanoma metastases (LMM), making it difficult to develop effective therapies.

Molecular oncologists and their colleagues at the Moffitt Cancer Center (Tampa, FL, USA) collected a total of 45 serial cerebrospinal fluid (CSF) samples from 16 patients, eight of these with confirmed LMM. Of those with LMM, seven had poor survival (<4 months) and one was an extraordinary responder (still alive with survival >35 months). CSF samples were analyzed by mass spectrometry and incubated with melanoma cells that were subjected to RNA-Seq analysis. Functional assays were performed to validate the pathways identified.

The scientists reported that mass spectrometry analyses showed the CSF of most LMM patients to be enriched for pathways involved in innate immunity, protease-mediated damage, and insulin-like growth factor (IGF)-related signaling. All of these were anti-correlated in the extraordinary responder. The most commonly altered protein was Transforming growth factor beta 1 (TGF-β1). Interestingly, the one patient who had an extraordinary response to treatment displayed high levels of these proteins at baseline, but expression levels decreased as the patient responded to treatment.

The authors concluded that their analyses identified proteomic/transcriptional signatures in the CSF of patients who succumbed to LMM. They further showed that the CSF from LMM patients has the potential to modulate BRAF inhibitor responses and may contribute to drug resistance. The study was published on January 10, 2020 in the journal Clinical Cancer Research.