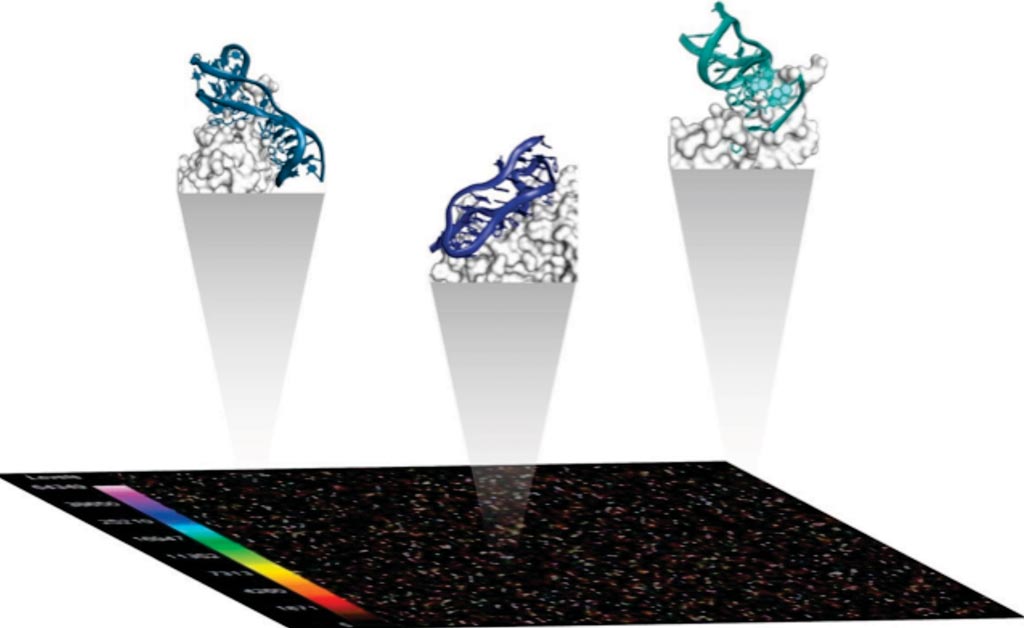 Image: A diagram of the SomaScan Assay that relies on the distinctive properties of Slow Off-rate Modified Aptamer (SOMAmer) reagents, which are proprietary protein binding reagents (Photo courtesy of Somalogic).
Parkinson’s disease (PD) is characterized by progressive loss of dopaminergic neurons in the substantia nigra, resulting in a clinical syndrome defined by bradykinesia, rigidity, tremor, and postural instability.

By the time a clinical diagnosis is made, 50% of nigral dopaminergic neurons may already be lost, suggesting a long prodromal phase during which intervention may be possible. Current medical practice for the diagnosis of PD relies almost entirely on clinical examination, with no laboratory-based testing available.

Neurologists from the University of Pennsylvania (Philadelphia, PA, USA; USA) and their collaborators analyzed 141 plasma samples (96 PD, 45 neurologically normal control [NC] individuals; 45.4% female, mean age 70.0 years) from a longitudinally followed Discovery Cohort based at the University, and they measured levels of 1,129 proteins using an aptamer-based platform.

Samples from the Discovery and Replication Cohorts were assayed using the 1.1k and 1.3k Assay versions of the SOMAScan platform in two separate runs, with operators blinded to disease status. This platform is based on protein-capture slow off-rate modified aptamers (SOMAmers), which are chemically modified oligonucleotides with specific affinity to recombinant protein targets, developed by in vitro selection (SELEX).

Candidate proteins were then ranked by Stability Selection. Of the top 10 proteins from the Discovery Cohort ranked by Stability Selection, four associations were replicated in the Replication Cohort. These blood-based biomarkers were bone sialoprotein (BSP), osteomodulin (OMD, aminoacylase-1 (ACY1), and growth hormone receptor (GHR). Plasma measures of OMD, ACY1, and GHR differed in PD versus NC but did not differ between 59 individuals with amyotrophic lateral sclerosis (ALS) versus NC. Measures of these proteins were not significantly affected by differences in sample handling, and they did not change comparing plasma samples from 10 PD participants sampled both on versus off dopaminergic medication.

The authors concluded that in their unbiased screening of more than 1,000 plasma proteins in multiple PD cohorts, they identified four plasma proteins, BSP, OMD, ACY1, and GHR, with consistent alterations in PD, one of which, growth hormone receptor, also predicted subsequent cognitive decline in multiple cohorts, across multiple cognitive testing instruments. The study was published on October 11, 2019, in the journal PLOS Medicine.