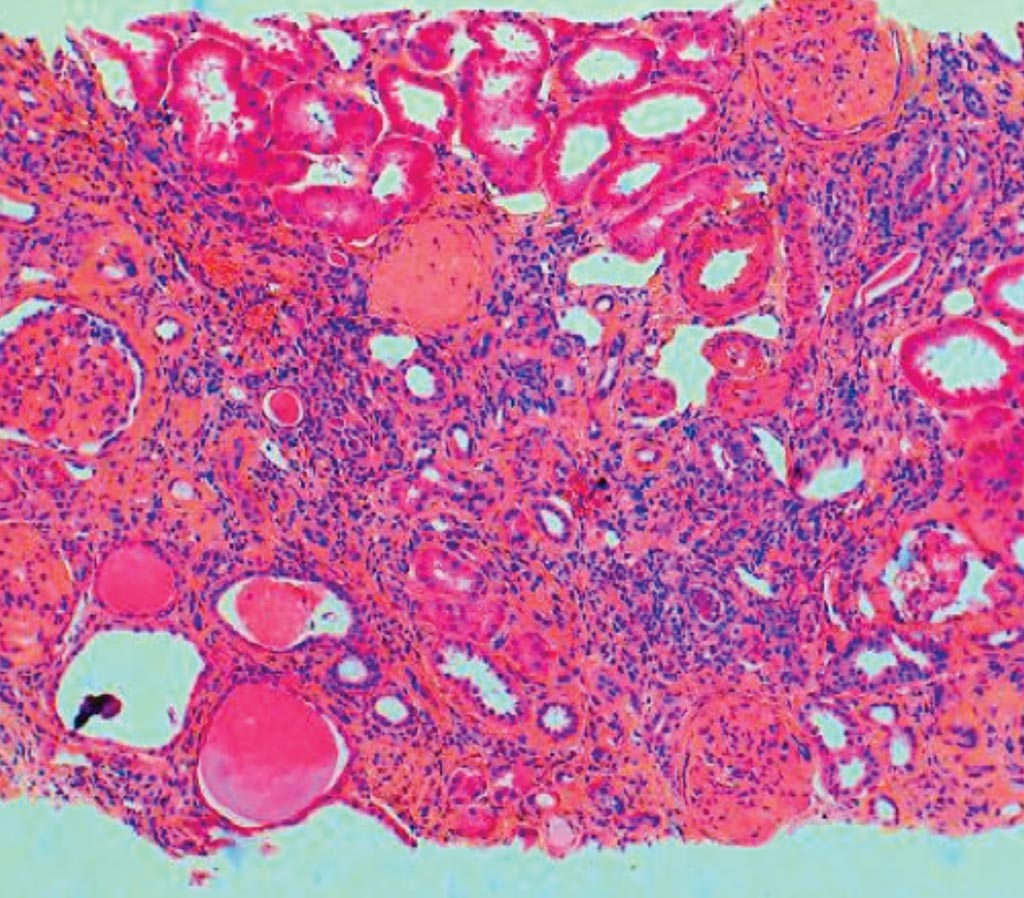 Image: A histopathology of chronic interstitial nephritis in end-stage kidney disease. There is diffuse interstitial scarring with a nonspecific mononuclear infiltrate (Photo courtesy of Agnes B. Fogo MD, Michael Kashgarian MD).
Chronic kidney disease (CKD) has been a growing health burden worldwide, and the patients with CKD continue to suffer from a wide range of complication including electrolyte imbalance, fluid overload, bone and mineral metabolism disorder to anemia.

CKD has been recognized as risk factors for 25-hydroxyvitamin D (25(OH) D) deficiency and low levels of 25 (OH) D have been suggested to be a trigger factor of decreased level of hemoglobin. However, there is lack of information about the magnitude of 25(OH) D deficiency and hemoglobin level in Nepalese CKD patients.

Two Nepalese scientists associated with Purbanchal University (Kathmandu, Nepal) carried out a cross-sectional study was carried out between June 2016 to May 2017 in the patients visiting outpatient nephrology unit at Kathmandu medical and teaching hospital and a total 172 patients who met the inclusion criteria were included in the study. All the patients had had measurement of serum creatinine, 25(OH) D and urine albumin creatinine. Clinically stable and with a diagnosis of CKD stage 2–5 who were not on dialysis were recruited for the study.

The scientists reported that the estimated prevalence of abnormal 25(OH) D metabolite of less than 30 ng/mL in the predialysis patients were (87.8%), with 32% and 55.8% deficiency and insufficiency 25(OH) D metabolite, respectively. On regression analysis, serum 25(OH) D was positively associated with male subjects, serum albumin, and eGFR, while inversely associated with age, iPTH. Hb concentration was found to be positively correlated with 25(OH) D in both univariate as well as in multivariate analysis.

The authors concluded that Hb concentration significantly, positively correlated with 25(OH) D age, eGFR and calcium level. Conversely, there was inverse relationship between Hb and iPTH. The study shows that lower level of 25(OH) D level are associated with lower level of Hb and higher level of iPTH, and could play a role in the development of anemia and hyperparathyroidism. The study was published on July 17, 2019, in the journal BMC Nephrology.