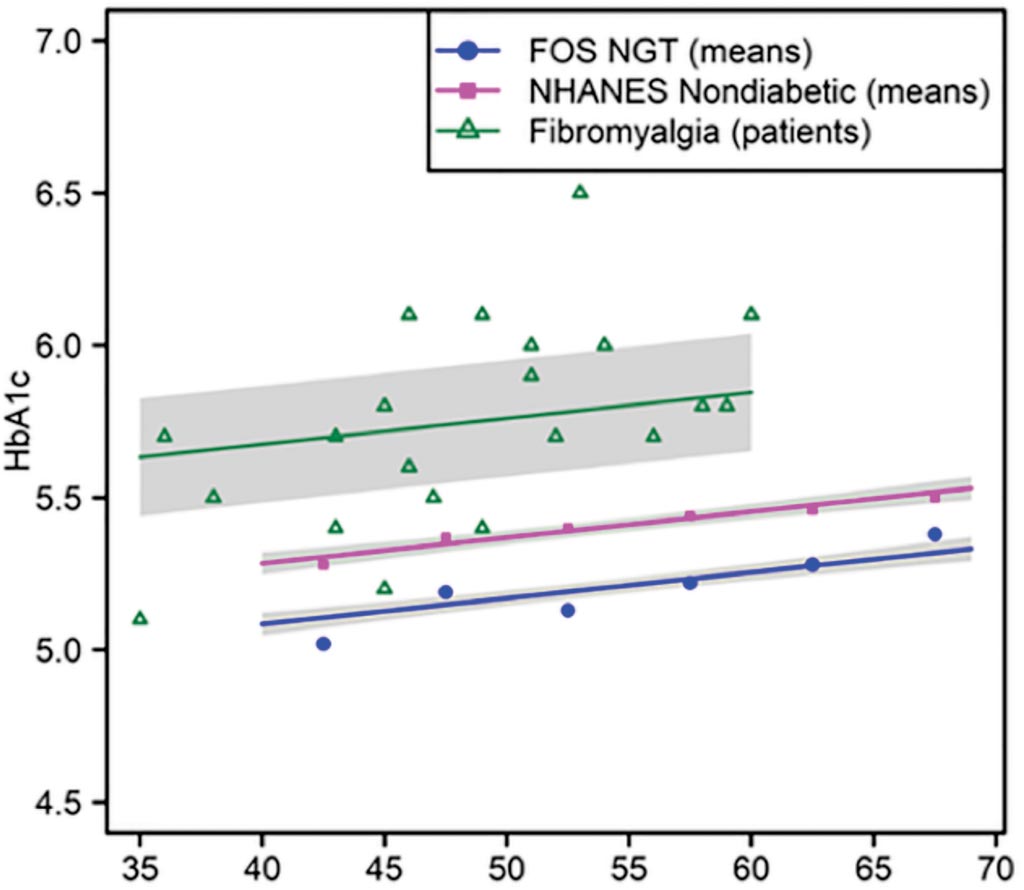 Image: HbA1c in patients with fibromyalgia versus controls (Photo courtesy of the University of Texas Medical Branch).
Fibromyalgia (FM) is one of the most frequent generalized pain disorders with poorly understood neurobiological mechanisms. In the general population, the estimated global prevalence of FM is 2.7% with a 3 to 1 female to male ratio.

Patients afflicted with FM have chronic widespread pain and protean somatic symptoms including fatigue, non-restorative sleep, gastrointestinal complaints and problems of cognition and mood. Due to lower pain thresholds, patients with FM also have a higher incidence of symptomatic musculoskeletal and spinal disorders, which in themselves contribute to the financial burden of managing this disorder.

Scientists from the University of Texas Medical Branch (Galveston, TX, USA) recruited 23 people with fibromyalgia whose doctors had referred them to a specialist clinic for the treatment of muscular or connective tissue pain. Since there is a known association between small fiber neuropathy and FM, many of these patients had undergone laboratory investigations in commercial CLIA (United States Clinical Laboratory Improvement Act) accredited laboratories. This comprised diagnostic panels for peripheral neuropathy, which included HbA1c values.

The HbA1c values from 23 patients with FM (eight Hispanic; 11 White; four African-American; 21 females, two males) were compared with the HbA1c means of two independent control populations. One was a non-diabetic population with normal glucose tolerance and the second population used for confirmation was extracted from the National Health and Nutrition Examination Survey dataset (NHANES non-diabetic).

When the investigators compared the HbA1c test results of the people with fibromyalgia with those of age-matched controls, they found that the former group had significantly higher levels of HbA1c than the latter, indicating a measure of insulin resistance. The regression estimates that HbA1c values in patients with FM mean 0.59 ± 0.1 units higher than Framingham Offspring Study (FOS NGT) and 0.39 units higher than the NHANES non-diabetic values.

A subgroup of patients meeting criteria for pre-diabetes or diabetes (patients with HbA1c values of 5.7% or greater) who had undergone treatment with metformin showed dramatic improvements of their widespread myofascial pain, as shown by their scores using a pre- and post-treatment numerical pain rating scale (NPRS) for evaluation. These findings suggest a pathogenetic relationship between FM and IR, which may lead to a radical paradigm shift in the management of this disorder.

Miguel A. Pappolla, MD, a neurologist and first author of the study, said, “We showed that most, if not all, patients with fibromyalgia can be identified by their HbA1c levels, which reflects average blood sugar levels over the past 2 to 3 months. People with prediabetes with slightly elevated HbA1c values carry a higher risk of developing central (brain) pain, a hallmark of fibromyalgia and other chronic pain disorders.”

The authors concluded that insulin resistance (IR) is being increasingly associated with a broad number of neurological disorders and FM may be one additional condition. Their data provides preliminary evidence suggesting that IR may be a pathological substratum in FM and sets the stage for future studies to confirm these initial observations. The study was published on May 6, 2019, in the journal PLOS ONE.