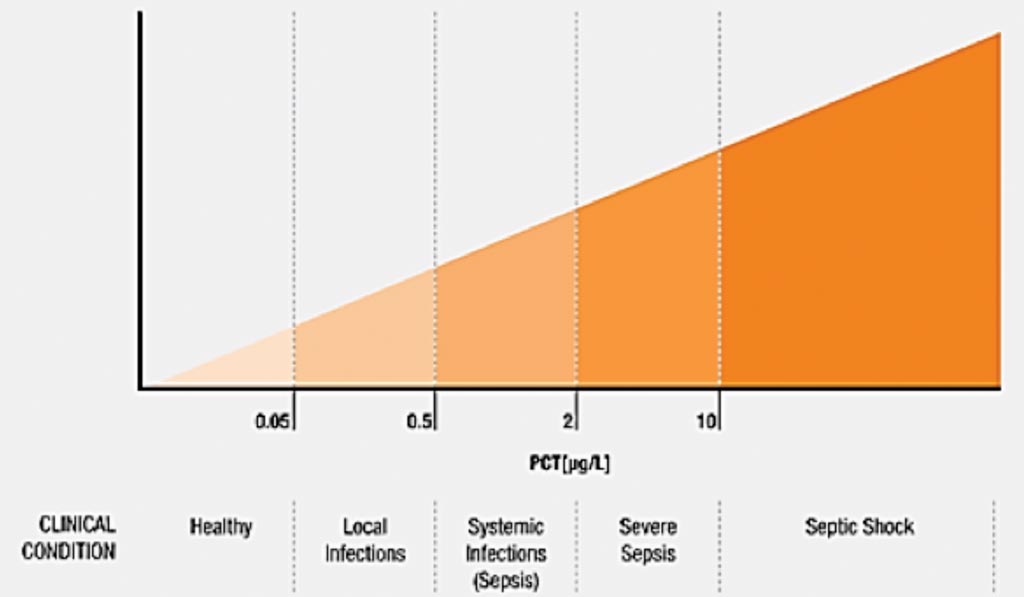 Image: Procalcitonin (PCT) levels and their relation to the clinical sepsis and septic shock (Photo courtesy of Technology Networks).
Sepsis is a potentially life-threatening condition caused by the body's response to an infection and occurs when the body's response to chemicals released into the bloodstream is out of balance, triggering changes that can damage multiple organ systems.

Sepsis can progress to septic shock when certain changes in the circulatory system, the body's cells and how the body uses energy become more abnormal. Septic shock is more likely to cause death than sepsis is. The recent definition of sepsis was modified based on a scoring system focused on organ failure (Sepsis-3).

Scientists at the Yonsei University Wonju College of Medicine (Wonju, Republic of Korea) conducted a study to verify the predictability of procalcitonin (PCT) for diagnosing sepsis based on Sepsis-3 definition. The team performed a retrospective cohort study and enrollees included patients whose PCT was measured on the emergency department (ED) arrival and had final diagnosis related infection. The patients were categorized by infection, sepsis, or septic shock followed by Sepsis-3 definition.

The authors concluded that PCT is a reliable biomarker to predict sepsis or septic shock according to the Sepsis-3 definitions. The study was published in the February 2019 issue of the American Journal of Emergency Medicine.