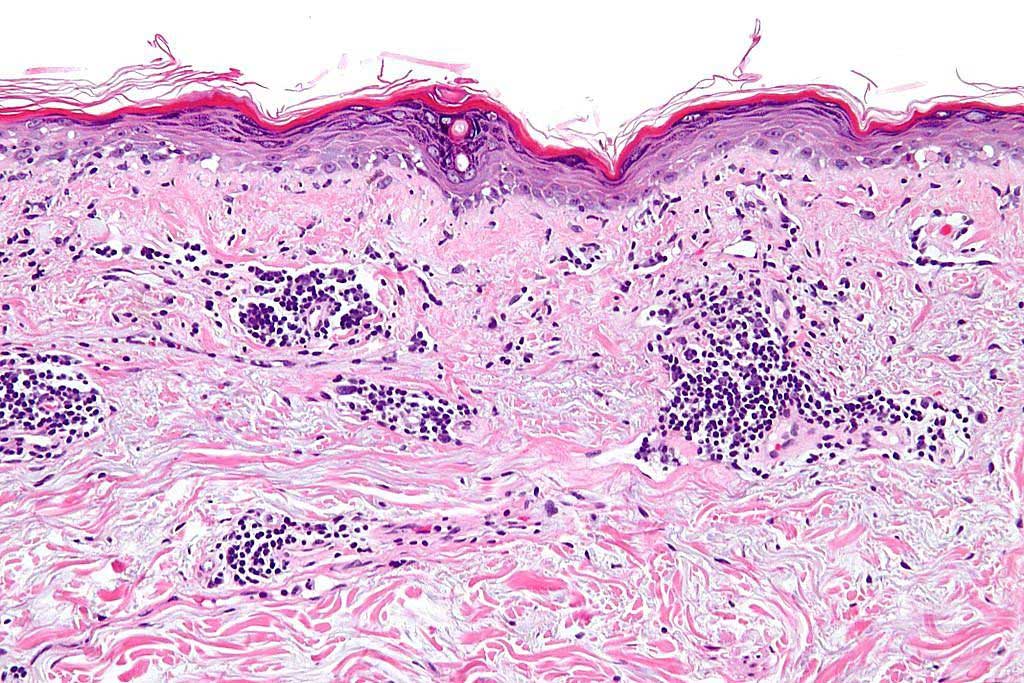 Image: Photomicrograph of a section of human skin showing a vacuolar interface dermatitis with dermal mucin. These findings are consistent with discoid skin lesions in lupus dermatitis (Photo courtesy of Nephron).
Systemic lupus erythematosus (SLE), is the most common type of lupus. SLE is an autoimmune disease in which the immune system attacks its own tissues, causing widespread inflammation and tissue damage in the affected organs. It can affect the joints, skin, brain, lungs, kidneys, and blood vessels.

Inflammation causes oxidative stress and favors protein, lipid and nuclear acids glycation creating products collectively denominated as Advanced Glycation Products (AGEs). Glycation is a non-enzymatic protein modification that occurs in situations of hyper and normal glycaemia being accelerated in the first situation. One of the members of the AGE family is pentosidine that results from the reaction of pentoses with free amino groups such as arginine and lysine.

The authors noted that SLE is a disease where inflammation biomarkers are difficult to interpret. C reactive protein, one of the most commonly used inflammatory indicators is usually low in active lupus and one of the given explanations is that patients with this disease can develop autoantibodies against it. A similar process could have happened with pentosidine. The authors concluded that pentosidine levels did not correlate with disease activity or cumulative damage in lupus. Further studies are needed to understand the role of this biomarker in skin manifestations of SLE. The study was published in the January, 2021 issue of the journal Practical Laboratory Medicine.