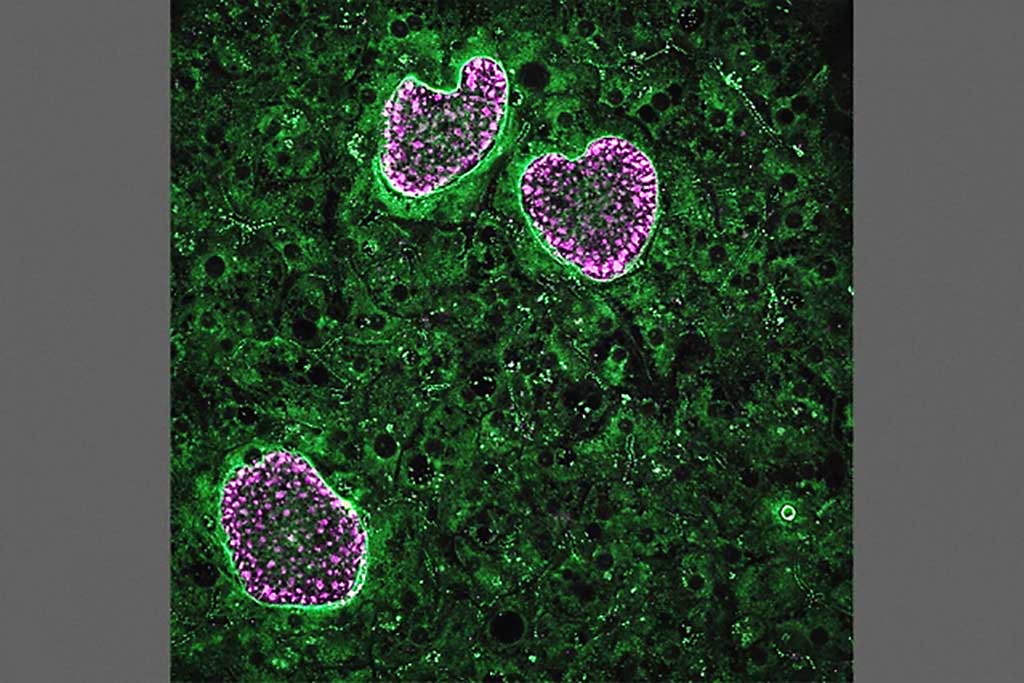 Image: Four Plasmodium vivax parasites have invaded human hepatocytes. Three of the parasites are developing while one parasite, on the lower left, is a dormant hypnozoite, which remains small until its reactivation (Photo courtesy of Nil Gural).
Plasmodium vivax is the most widespread malaria parasite worldwide, with up to two billion people at risk of infection. As well as causing illness and death in its 'active' stage of infection, the parasite can hide as hypnozoites, a dormant stage, in the liver, and is a significant cause of 'relapsing' malaria.

These hypnozoites, undetectable with current diagnostics, can be responsible for more than 80% of all blood-stage infections. Identifying and targeting individuals with hypnozoites is thus essential for accelerating and achieving malaria elimination. A major gap in the P. vivax elimination toolkit is the identification of individuals carrying clinically silent and undetectable hypnozoites.

Medical scientists at the Walter and Eliza Hall Institute of Medical Research (Melbourne, Australia) and their colleagues developed a panel of serological exposure markers capable of classifying individuals with recent P. vivax infections who have a high likelihood of harboring hypnozoites.

Candidate markers were validated using samples from year-long observational cohorts conducted in Thailand, Brazil and the Solomon Islands and the antibody responses to eight P. vivax proteins classified P. vivax infections in the previous nine months with 80% sensitivity and specificity. Mathematical models demonstrate that a serological testing and treatment strategy could reduce P. vivax prevalence by 59%-69%.

The authors concluded that the eight antibody responses can serve as a biomarker, identifying individuals who should be targeted with anti-hypnozoite therapy. The test offers new opportunities for improving malaria control and elimination strategies. The study was published on May 11, 2020 in the journal Nature Medicine.