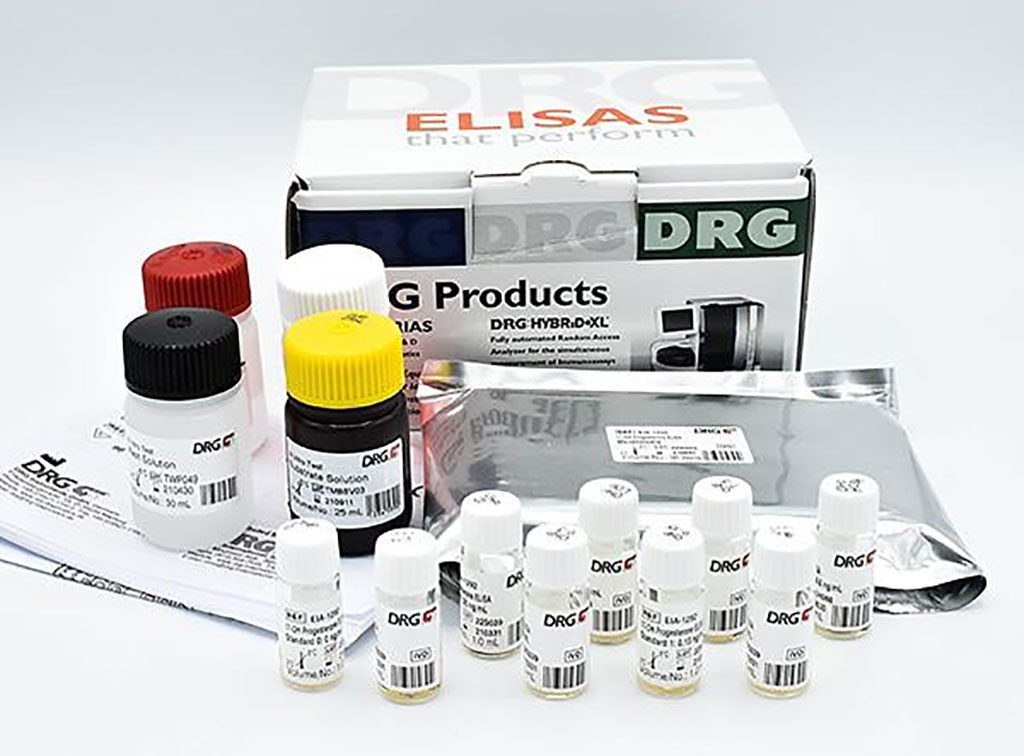 Image: The Hepcidin-25 (bioactive) HS ELISA RUO is a highly sensitive enzyme immunoassay for the quantitative measurement of Hepcidin-25 in serum or plasma. Hepcidin is elevated in Parkinson’s disease patients (Photo courtesy of DRG Instruments)
Uremic-retention solutes are the compounds whose concentration in an organism increases with decreasing kidney function. At uremic concentrations, they play a crucial role in the progression of chronic kidney diseases (CKD) and have negative outcomes.

Scientists at the Medical University of Warsaw (Warsaw, Poland) collected plasma and cerebrospinal fluid (CSF) samples were from 27 volunteers (18 with Parkinson’s Disease (PD) and nine controls). Venous blood samples were collected into a tube with EDTA and without anticoagulants, and centrifuged. CSF samples were collected via lumber puncture and centrifuged to remove blood cells contamination, before freezing. Fresh serum was subjected to routine analyses including the measurement of C-reactive protein (CRP) and creatinine.

The team reported that there was no statistically significant difference between the study groups regarding the percentage of males, creatinine, CRP, TAC, and marker of oxidative stress: 8-Oxo-2'-deoxyguanosine (8-OHdG). PD patients were slightly older and had lower eGFR (all values were in the reference range regarding the age). They had elevated hepcidin level and lower prohepcidin concentration in plasma than the control group. In PD, for IS and pCS, CSF-plasma ratio was higher. Concentration of pCS in CSF was higher in PD compared to controls. TMAO level was also higher in plasma of that group. Patients with motor fluctuations had higher level of uremic toxins in CSF, but not in plasma.

The authors concluded that in PD, higher concentration of pCS in CSF was observed. The CSF-plasma ratio of pCS and IS was four and eight times higher in PD compared to the control group, respectively. It indicates their higher than expected concentration in CSF, compared to their levels in blood. Toxins were higher in CSF, but not in plasma of patients with motor fluctuations. Uremic toxins like pCS, IS, ADMA, SDMA, and TMAO can be associated with pathogenesis and progression of PD. The study was published on November 11, 2019 in the journal Clinica Chimica Acta.