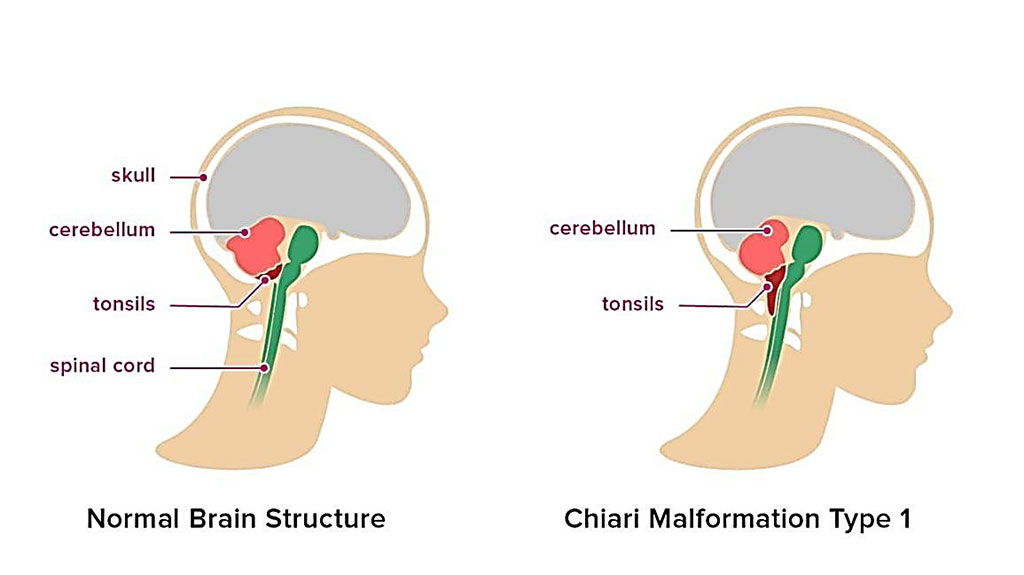 Image: Schematic representation of Chiari malformation type 1; it involves the lower part of the cerebellum known as tonsils, but not the brain stem (Photo courtesy of Healthline).
About one in 100 children has a common brain disorder called Chiari 1 malformation, but most of the time such children grow up normally and no one suspects a problem. However about one in 10 of those children, the condition causes headaches, neck pain, hearing, vision and balance disturbances, or other neurological symptoms.

Chiari I malformation (CM1), the displacement of the cerebellum through the foramen magnum into the spinal canal, is one of the most common pediatric neurological conditions. Individuals with CM1 can present with neurological symptoms, including severe headaches and sensory or motor deficits, often as a consequence of brainstem compression or syringomyelia (SM).

A large team of scientists led by those at Washington University School of Medicine (St. Louis, MO, USA) conducted whole-exome sequencing (WES) on all the genes of 668 people with CM1, as well as 232 of their relatives and performed gene-burden and de novo enrichment analyses. Of these relatives, 76 also had Chiari 1 malformation and 156 were unaffected.

The team reported that sequencing revealed that people with Chiari 1 malformation were significantly more likely to carry mutations in a family of genes known as chromodomain genes. Several of the mutations were de novo, meaning the mutation had occurred in the affected person during fetal development and was not present in his or her relatives. In particular, the chromodomain genes CHD3 and CHD8 included numerous variants associated with the malformation.

The investigators noted that Chromodomain genes help control access to long stretches of DNA, thereby regulating expression of whole sets of genes. Since appropriate gene expression is crucial for normal brain development, variations in chromodomain genes have been linked to neurodevelopmental conditions such as autism spectrum disorders, developmental delays, and unusually large or small heads. The association between chromodomain genes and head size inspired the team to measure the heads of children with Chiari malformations, comparing them to age-matched controls and to population averages. Children with Chiari tended to have larger than average heads. Those children with the largest heads - bigger than 95% of children of the same age - were four times more likely to be diagnosed with the malformation.

Gabriel Haller, PhD, an assistant professor of neurosurgery and senior author of the study, said, “It's not well known how chromodomain genes function since they have such a wide scope of activity and they are affecting so many things at once. But they are very intriguing candidates for molecular studies, to understand how specific mutations lead to autism or developmental delay or, as in many of our Chiari patients, just to increased brain size without cognitive or intellectual symptoms. We'd like to figure out the effects of each of these mutations so that in the future, if we know a child has a specific mutation, we'll be able to predict whether that variant is going to have a harmful effect and what kind.” The study was published on December 21, 2020 in the American Journal of Human Genetics.