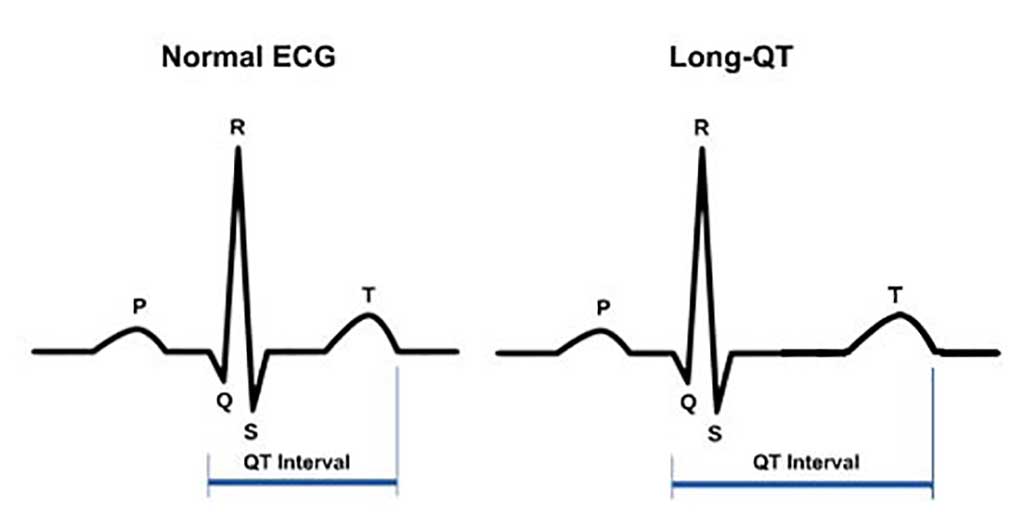 Image: Normal electrocardiogram (ECG) and an ECG showing QT interval prolongation (long QT syndrome). The P wave represents atrial depolarization; the QRS complex, ventricular depolarization; and the T wave, ventricular repolarization. The QT interval is measured from the beginning of the QRS complex to the return of the T wave to the isoelectric line (Photo courtesy of Mayo Clinic).
Long QT syndrome (LQTS) is the first described and most common inherited arrhythmia. Over the last 25 years, multiple genes have been reported to cause this condition and are routinely tested in patients.

It is now known that that some variants that were thought to be rare are in fact common in populations, and that rare genetic variants are collectively extremely common, with the majority of rare variants not causative for Mendelian disease. Because of dramatic changes in our understanding of human genetic variation, reappraisal of reported genetic causes for LQTS is required.

A large team of scientists led by those at the Toronto General Hospital Research Institute (Toronto, ON, Canada) divided into three gene curation teams who independently assessed each of the 17 genes associated with long QT syndrome to classify the evidence linking them to the disease as either definitive, strong, moderate, or limited. A panel convened by the Clinical Genome Resource (ClinGen) has now re-examined the evidence linking these genes to long QT syndrome.

The investigators found that only three of the 17 genes have strong evidence for their connection to the common form of the condition and four genes had evidence linking them to atypical long QT syndrome. According to the authors, many of the other genes should not be considered when pursuing genetic testing for long QT syndrome because of their tenuous link to the disease.

The three genes, KCNQ1, KCNH2 and SCN5A, were classified as having definitive evidence linking them to typical long QT syndrome, as their association was supported by linkage analyses in multiple families, as well as genetic and experimental evidence. Four other genes, CALM1, CALM2, CALM3, and TRDN, had definitive or strong evidence linking them to atypical forms of long QT syndrome, such as ones that present in early childhood, often alongside other symptoms such as seizures and developmental delay.

The evidence linking six genes to long QT syndrome was classified as disputed. For four of these genes, the publications linking them to the condition described candidate gene approaches that the curation teams gave less weight, while the evidence linking the other two genes came from linkage analyses in large families that the scientists said had significant limitations.

Michael Gollob, MD, FRCP. an Associate Professor of Cardiology and senior author of the study, said, “Our study highlights the need to take a step back and to critically evaluate the level of evidence for all reported gene-disease associations, especially when applying genetic testing for diagnostic purposes in our patients. Testing genes with insufficient evidence to support disease causation only creates a risk of inappropriately interpreting the genetic information and leading to patient harm.” The study was published on January 27, 2020 in the journal Circulation.