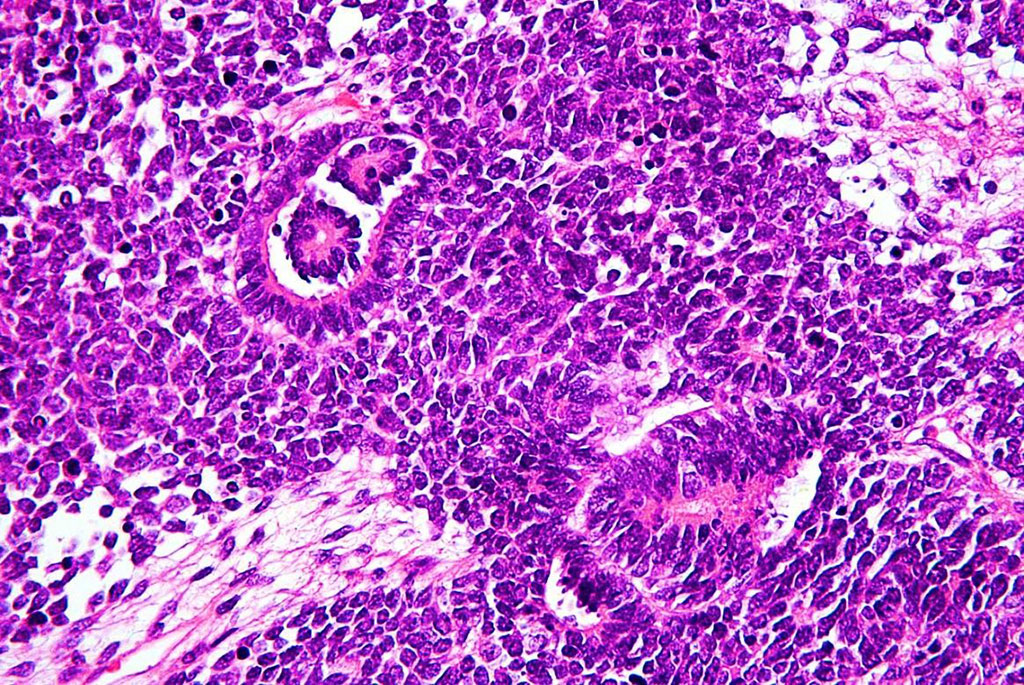 Image: Histopathology of Wilms tumor or nephroblastoma which is a type of kidney cancer that is seen predominantly in children (Photo courtesy of Nephron).
While kidney cancer in children is rare, the most common type is Wilms tumor, which mostly affects children under the age of five. Most cases of Wilms tumor can be cured through surgery to remove the afflicted kidney in combination with chemotherapy and possibly radiotherapy.

In adults, cancers are typically thought to arise through premalignant clonal expansion, but it's been unclear whether the process is similar in pediatric cancers. Scientists have sequenced tumor and normal kidney tissue to find that alterations indicative of disease were present in some normal tissue from patients as well as in tumors, indicating that that these changes affect cells from which Wilms tumors may later arise.

A large team of scientists working with the Wellcome Sanger Institute (Hinxton, UK) sequenced kidney samples from 54 people, including nearly two dozen children with Wilms tumor, the parents of children with Wilms tumor, and others. The team constructed phylogenetic trees of tumor development based on the somatic mutations present. For three children with unilateral Wilms tumor, they sampled their tumors, blood, and histologically normal kidney and uncovered mosaic mutations within these samples. As some of these mosaic mutations were found in both normal and tumor kidney tissue, though not in blood the investigator suspected that these mutations might have undergone clonal expansions within the kidney.

The scientists folded in additional samples from other Wilms tumor cases; they found these clonal expansions within normal kidney tissue in 61% of the 23 cases they examined. But when they examined tissues from people without Wilms, they found that these clonal expansions were not common in normal kidney development. Instead, these expansions within histologically normal tissue were atypical outcomes of renal development that appear to precede development of Wilms tumor. Nearly 60% of these normal kidney tissues with clonal nephrogenesis exhibited hypermethylation of the H19 locus, which typically acts to regulate cell growth and is a known Wilms tumor driver. This hypermethylation was found throughout the clone. This suppression of H19 leads cells to grow more rapidly to create this swathe of pre-malignant cells from which Wilms tumor may then arise.

Sam Behjati, MA, BM, BCh (Oxon), PhD, a consultant pediatric oncologist and senior study author, said, “The discovery of the genetic root of Wilms' tumor signals a shift in our understanding of this particular cancer and childhood cancer more generally. Our findings represent a radical departure from how we think about Wilms' tumors because we never expected to find the root of cancer in normal-looking tissue.”

The authors concluded that phylogenetic analyses of bilateral tumors indicated that clonal expansions can evolve before the divergence of left and right kidney primordia. These findings reveal embryonal precursors from which unilateral and multifocal cancers develop. The study was published on December 6, 2019 in the journal Science.