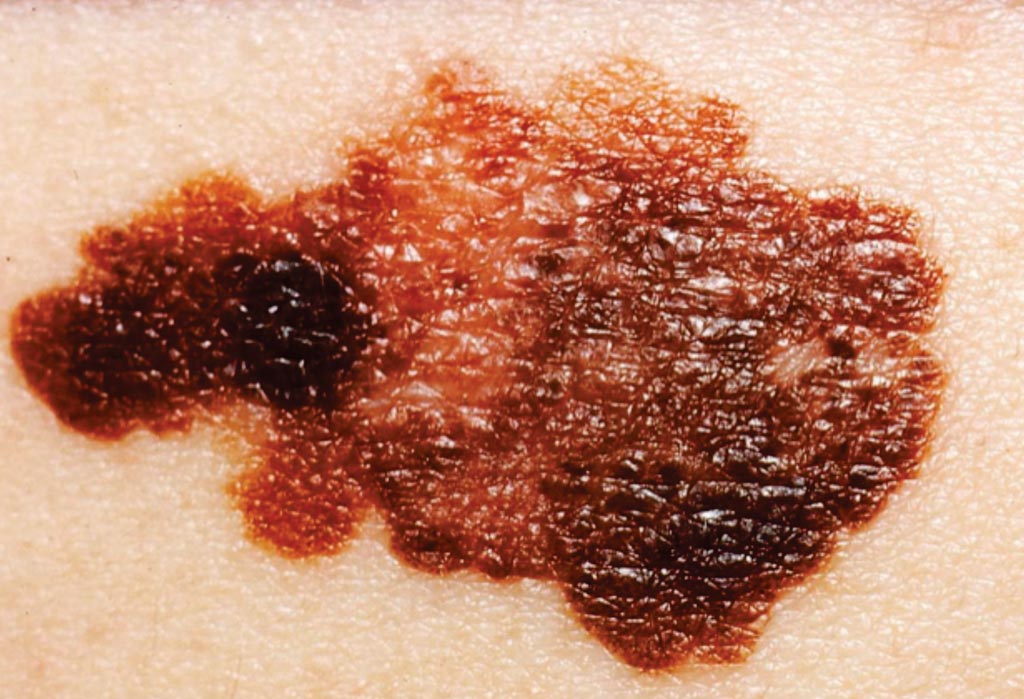 Image: A melanoma on a patient\'s skin. Most melanomas are black or brown, but they may also be skin-colored, pink, red or purple. People with chronic lymphocytic leukemia are at a higher risk for melanomas (Photo courtesy of the National Cancer Institute).
Melanoma, also known as malignant melanoma, is a type of cancer that develops from the pigment-containing cells known as melanocytes. Chronic lymphocytic leukemia (CLL) is a type of cancer that starts from white blood cells (called lymphocytes) in the bone marrow.

Melanoma is significantly more common and is associated with a poorer prognosis in patients with an underlying B-cell malignancy. Although previous studies have shown a higher risk of melanoma among patients with chronic lymphocytic leukemia (CLL), detection rates and treatment efficacy had yet to be reported.

Scientists at the University of Rochester Medical Center (Rochester, NY, USA) reported on the management of patients with chronic lymphocytic leukemia/small lymphocytic lymphoma (CLL) and a subsequent diagnosis of melanoma. In the Wilmot Cancer Institute CLL cohort that included 470 patients, 18 patients (3.8%) developed 22 melanomas.

The team reported that 14 melanomas were invasive; a significantly higher rate as compared with the age and sex matched general population (standardized incidence ratio [SIR] 6.32). Melanomas were most often detected (n = 15; 68.2%) through active surveillance in a dermatology clinic. Most melanomas (n = 17; 77.3%) were detected at a non-advanced stage (pathological stage grouping < III). Two cases (9%) were found by CLL specialists. Eighty-eight percent of the cases involved earlier-stage disease with a better prognosis.

The most common management was wide local excision without sentinel lymph node biopsy (n = 13, 59.1%). Management for the four (18.2%) patients with metastatic disease included one patient treated immune checkpoint inhibitor (ICI) pembrolizumab, one had systemic chemotherapy with dacarbazine, and two patients received palliative care. The same study also included evidence of a drug therapy combination that lead to effective results. One CLL patient, a 75-year old woman, developed advanced melanoma and was treated with the immunotherapy drug, pembrolizumab. She went into remission for more than two years.

Clive S. Zent, MD, a Professor of Hematology/Oncology and Medicine and lead author of the study, said, “We do not for sure know why CLL patients are more susceptible to melanoma, but the most likely cause is a suppressed immune system. Normally, in people with healthy immune systems, malignant skin cells might be detected and destroyed before they become a problem. But in CLL patients, failure of this control system increases the rate at which cancer cells can grow into tumors, and also the likelihood that they will become invasive or spread to distant sites.”

The authors concluded that patients with CLL may benefit from active surveillance for melanoma leading to early excision of locally-manageable disease. In patients with metastatic melanoma, combined treatment with targeted kinase inhibitors and ICIs can be successful and tolerable. The study was published in the August 2019 issue of the journal Leukemia Research.