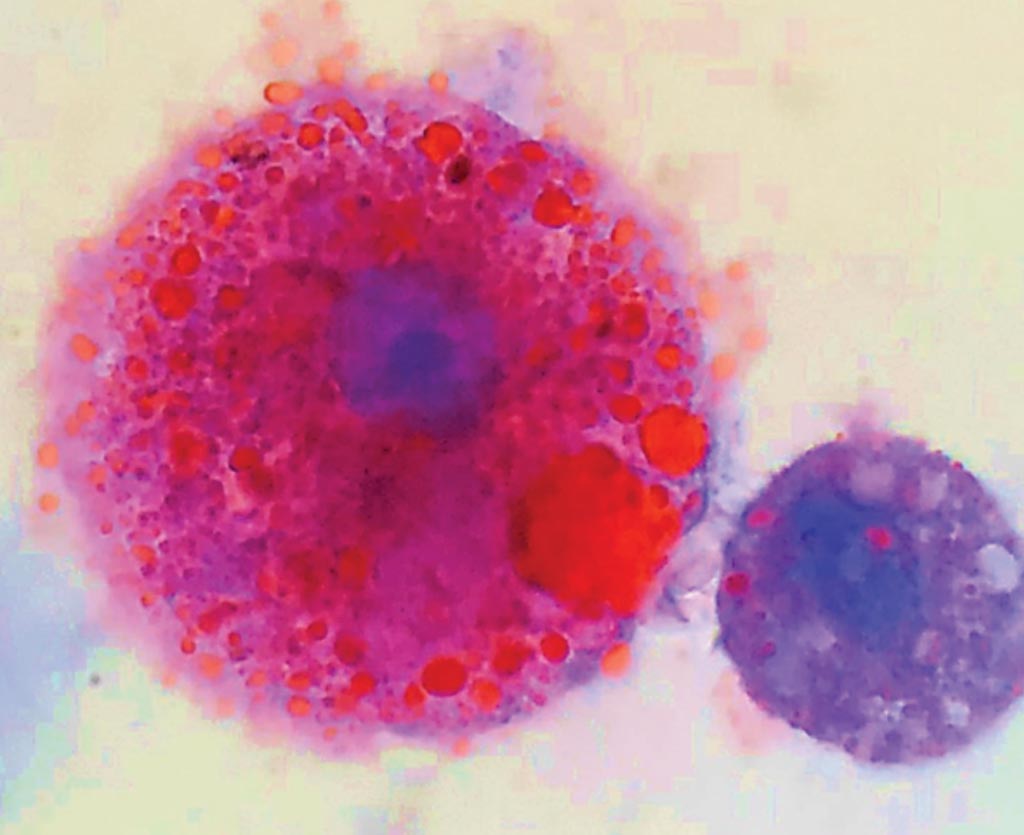 Image: Lipid-laden macrophages found in patients with vaping-related respiratory illness. Oily lipids are stained red (Photo courtesy of Andrew Hansen, MD, Jordan Valley Medical Center).
Lung scans from patients with vaping illness look like a serious viral or bacterial pneumonia, but those tests come back negative. Instead, diagnosis has been based on exclusion of known causes of similar respiratory illnesses combined with knowing the patient has a history of vaping.

Doctors have identified a previously unrecognized characteristic of the vaping-related respiratory illness that has been emerging in clusters across the USA in recent months. Within the lungs of these patients are large immune cells containing numerous oily droplets, called lipid-laden macrophages.

Physicians at the University of Utah Health (Salt Lake City, UT, USA) identified the lipid-laden macrophages in all six cases seen at University of Utah Hospital. The cells were found in samples after performing a procedure called bronchoalveolar lavage where fluid is squirted into a small section of the lungs and then collected for examination. Bronchoalveolar lavage (BAL) fluid showed neutrophilic predominance (49%) and more than 50% lipid-laden macrophages by oil red O staining. Staining them with this dye called highlighted the oily droplets littered throughout these cells. Testing of this fluid by culture and polymerase-chain-reaction assay for bacterial, fungal, and viral pathogens did not reveal any evidence of infection.

Scott Aberegg, MD, a critical care pulmonologist and senior author of the study, said, “While it is too soon to be sure, these lipid-laden macrophages may turn out to be useful to confirm or rule out this disease. They may also be helpful in understanding what is causing this illness. These cells are very distinctive, and we don't often see them. That made everybody start to think carefully about why they were there. Are they scavenging debris in the lungs that was introduced through vaping? We need to determine if these cells are specific for the illness or whether they are also seen in vaping patients who are not ill and don't have symptoms. If they are only seen in patients who get sick, we can begin to make some connections between what we're seeing in the lipid laden macrophages and whatever components of the vaping oils may be causing this syndrome.” The study was published on September 6, 2019, in the journal The New England Journal of Medicine.