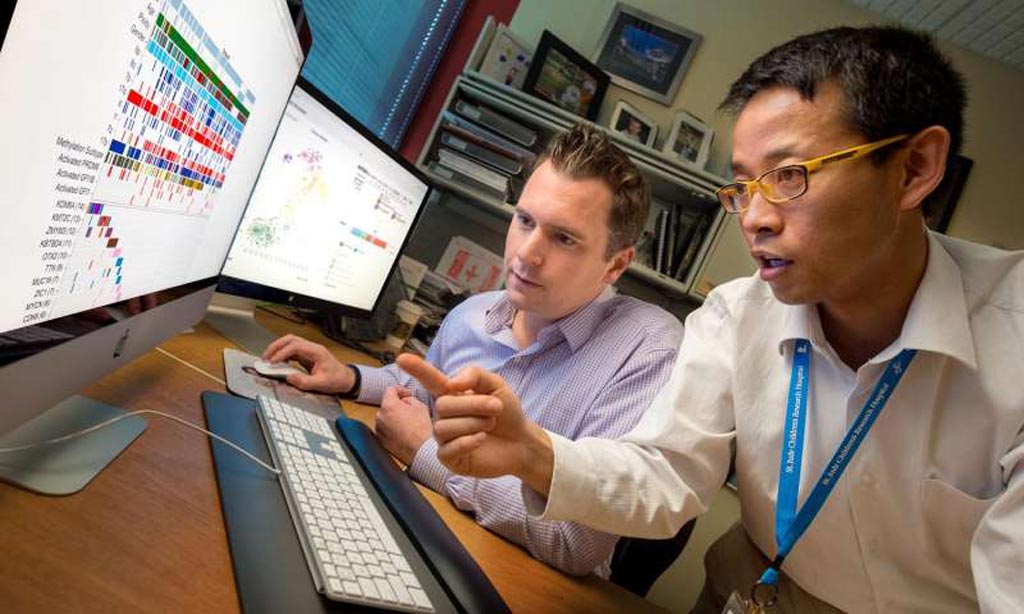 Image: Co-first author Paul Northcott, Ph.D., an assistant member of the St. Jude Department of Developmental Neurobiology and author Xin Zhou, PhD, senior bioinformatics research scientist (Photo courtesy of Seth Dixon / St. Jude Children\'s Research Hospital).
An international consortium has completed a landmark genomics study of medulloblastoma, the most common pediatric brain tumor, revealing much information about subtypes and laying a foundation to expand precision medicine. The most comprehensive analysis yet of medulloblastoma identified genomic changes responsible for over 75% of the many tumors examined; as well as two new suspected cancer genes found exclusively in the least understood disease subgroups.

“Our goal is to understand each patient’s tumor at the molecular level in order to better tailor treatment,” said Dr. Northcott, “This study provides a rich resource for neuro-oncology researchers and clinicians.” It can aid efforts to develop medicines designed to increase survival while reducing treatment-related side effects.

Medulloblastoma is the most common malignant pediatric brain tumor. There are four principal subgroups: WNT, Sonic Hedgehog (SHH), Group 3, and Group 4. The subgroups are driven by different genetic alterations, begin in different cells, and often exhibit different clinical outcomes. About 95% of patients in the WNT subgroup become long-term survivors compared to about 50% for Group 3 patients. There are currently no targeted therapies for Group 3 and Group 4 tumors, which account for over 65% of medulloblastoma cases.

The discoveries include identification of two new suspected oncogenes: KBTBD4 and PRDM6. The genes were found only in Group 3 and Group 4 medulloblastoma and had not previously been associated with any cancer. KBTBD4 was the most frequently mutated gene in those subgroups, involving insertion of one or two amino acids in the same mutation hot spot. The KBTBD4 protein is predicted to function in conjunction with ubiquitin ligase enzymes, but research is underway to better understand how the normal and mutant proteins function.

PRDM6 is an epigenetic regulator of gene activity whose own expression was dramatically increased in 17% of the Group 4 medulloblastoma tumors. If PRDM6 is confirmed to be an oncogene, researchers hope it will lead to development of the first laboratory model of Group 4 medulloblastoma. Such models play a pivotal role in clinical advances.

Overall, the integrated genomic analysis led to identification of altered genes and cellular pathways responsible for over 75% of patients’ tumors. The data also revealed additional complexity within different medulloblastoma subgroups, particularly Group 3 and Group 4. Researchers can access processed study data at no cost through the St. Jude PeCan data portal, the R2: Genomics Analysis and Visualization Platform and the PedcBioPortal for Cancer Genomics.

“The more refined classification of medulloblastoma offered in this study opens avenues for improved risk-stratification of patients and more tailored therapies that target the genomic alterations driving their disease,” said Dr. Gajjar.