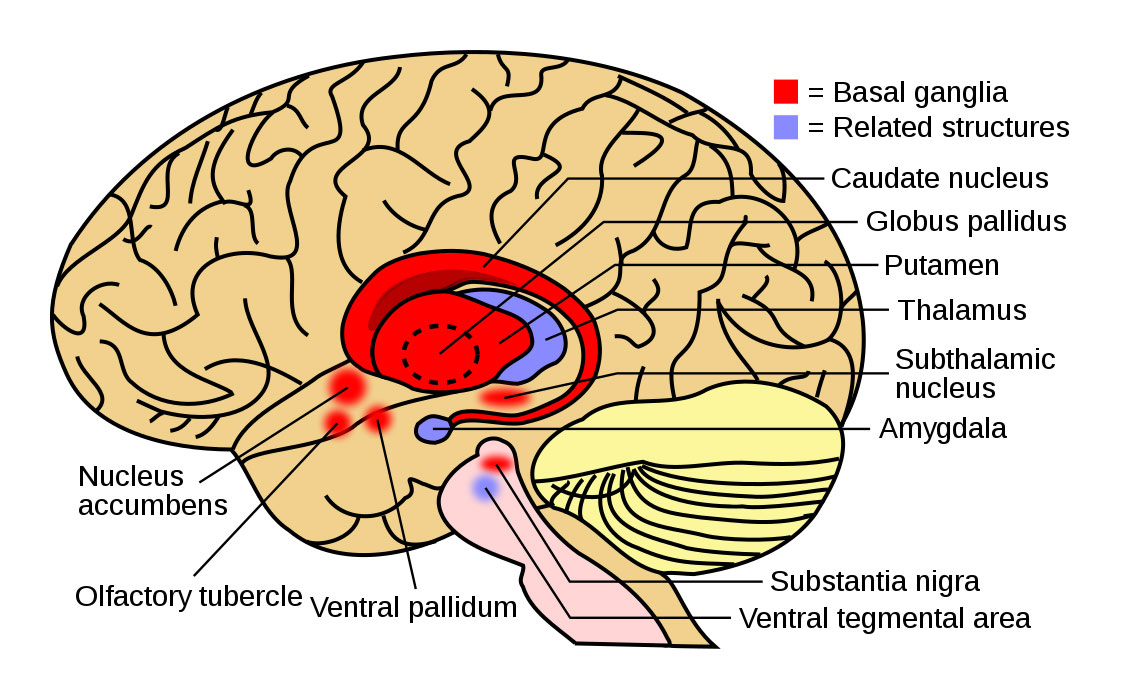 Image: Corticobasal degeneration (CBD): diagram of the basal ganglia (in red) and related structures (in blue) within the brain. Basal ganglia along with cerebral cortex are involved in this condition (Photo courtesy of Wikimedia Commons)

Biomarkers have been found that identify, with up to 89% accuracy, individuals with the primary tauopathy, corticobasal degeneration.

Tauopathies are a heterogeneous group of neurodegenerative diseases that all include aggregated tau proteins. The symptomatic phases of these fatal illnesses involve neurological impairments that typically progress over years to decades, leading to substantial medical, social, and financial burden on patients and families.

Corticobasal degeneration (CBD) is a rare neurodegenerative disease involving the cerebral cortex and the basal ganglia. CBD symptoms typically begin in people from 50 to 70 years of age, and the average disease duration is six years. It is characterized by marked disorders in movement and cognition, and is classified as one of the Parkinson plus syndromes. Diagnosis is difficult, as symptoms are often similar to those of other disorders, such as Parkinson's disease, progressive supranuclear palsy, and dementia with Lewy bodies, and a definitive diagnosis of CBD can only be made upon neuropathologic examination.

Seeking a better method for diagnosing CBD, investigators at Washington University School of Medicine (St. Louis, MO, USA) used an immunoprecipitation technique followed by mass spectrometry to examine brain tissues and cerebrospinal fluid from patients who had died with dementia and movement disorders, and whose specific diseases had been confirmed at autopsy. The study population included patients with one of five primary tauopathies: CBD; progressive supranuclear palsy (PSP); frontotemporal lobar degeneration with microtubule association protein tau mutations (FTLD-MAPT); agyrophilic grain disease; and Pick's disease, as well as Alzheimer's disease, and dementia not related to tau. For comparison, samples from individuals without dementia were also examined.

Results revealed that two particular forms of tau, microtubule binding region (MTBR)-tau 275 and MTBR-tau 282, were unusually prevalent in the brains and reduced in the cerebrospinal fluid of patients with CBD and a subset of FTLD-MAPT. Furthermore these forms of tau distinguished patients with CBD from those with other primary tauopathies with 84% to 89% accuracy, depending on the disease.

"Before, the only way to find out which primary tauopathy a person had was to wait until they died and then examine the person's brain under a microscope," said senior author Dr. Chihiro Sato, assistant professor of neurology at Washington University School of Medicine. "A patient comes in with stiffness, balance problems, slurred speech, and memory issues, and it could be CBD, but it also could be progressive supranuclear palsy (PSP) or Alzheimer's or other diseases. This biomarker can reliably identify people with CBD, which means we can use it to enroll people in clinical trials. And, down the road, it may be key to initiating therapies."

The CBD study was published in the November 24, 2022, online edition of the journal Nature Medicine.