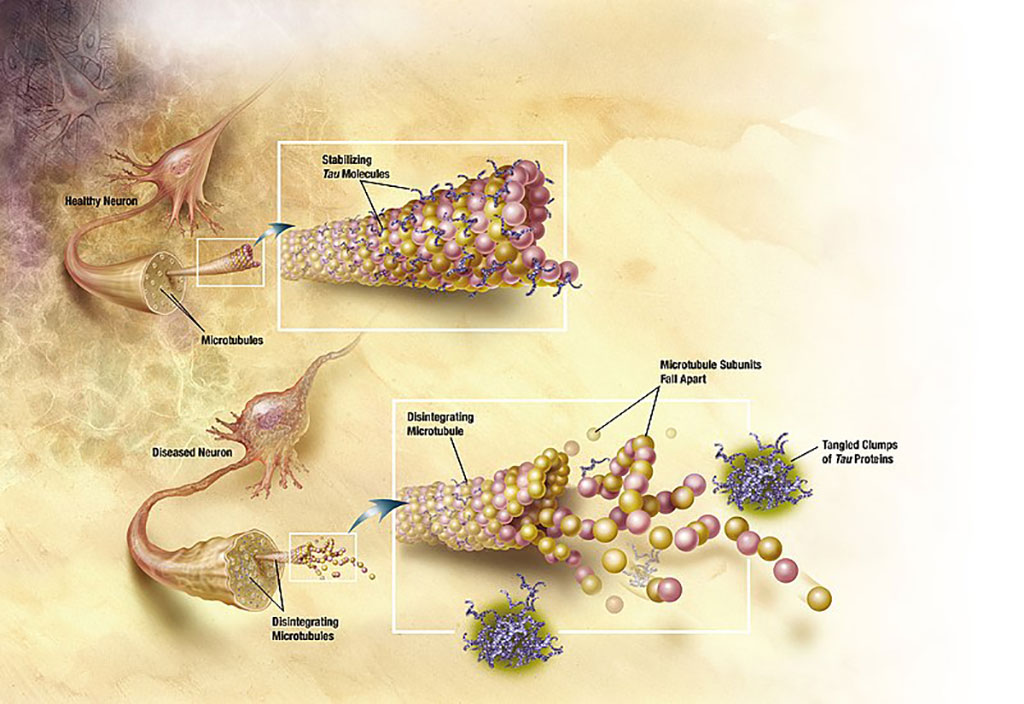 Image: In Alzheimer`s disease, changes in tau protein lead to the disintegration of microtubules in brain cells (Photo courtesy of Wikimedia Commons)

A team of neurodegenerative disease researchers has identified an additional phosphorylated tau protein variant that augments the toolbox of biomarkers for early diagnosis of Alzheimer’s disease.

The tau proteins are a group of six highly soluble protein isoforms produced by alternative splicing from the MAPT (microtubule-associated protein tau) gene. They have roles primarily in maintaining the stability of microtubules in axons and are abundant in the neurons of the central nervous system (CNS). They are less common elsewhere but are also expressed at very low levels in CNS astrocytes and oligodendrocytes. Pathologies and dementias of the nervous system such as Alzheimer's disease (AD) and Parkinson's disease are associated with tau proteins that have morphed into hyperphosphorylated insoluble aggregates called neurofibrillary tangles. Recent studies have shown that a biomarker in the blood, phosphorylated tau (P-tau217) can detect Alzheimer's disease as early as 20 years before memory problems become apparent and, most importantly, distinguish Alzheimer's disease from other forms of dementia with about 95% accuracy.

Results of these screening tests revealed that site-specific p-tau antibodies could not only differentiate AD from non-AD brains, but also discriminate AD from other tauopathies. Differential detection of tau aggregates identified several novel p-tau sites as potential new biomarkers. In particular, they showed that p-tau198 was a novel promising AD biomarker with sensitivity and specificity comparable with the existing biomarkers p-tau181 and p-tau217. The results demonstrated that p-tau198 detection could differentiate AD from non-AD controls, and also diagnose AD from related tauopathies.

The investigators concluded that their work provided a new avenue for developing diagnosis and differentiation tools for AD and related tauopathies. Furthermore, they suggested that p-tau198 and p-tau217 could help clinicians intervene early, as new treatments become available, before significant neurological damage occurs.

The study was published in the November 9, 2022, online edition of the journal ACS Chemical Neuroscience.