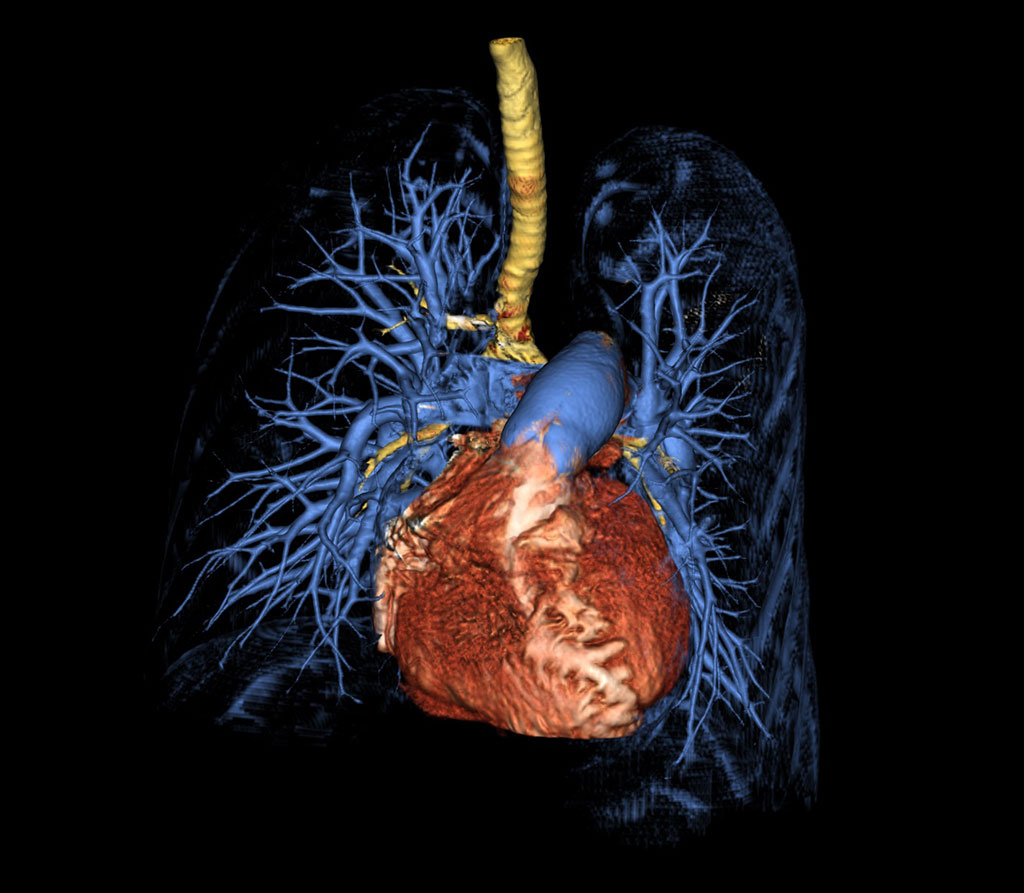 Image: CT 3D surface rendering of the lungs and heart from a patient with pulmonary arterial hypertension (Photo courtesy of NIH)

Pulmonary arterial hypertension (PAH) is a rare, life-threatening condition that causes unexplained high blood pressure in the lungs. This rare form of pulmonary hypertension can cause difficulty breathing, chest pain, and fatigue. The disease, whose exact cause is unknown, is estimated to affect less than 50,000 people in the US. It is characterized by progressive narrowing and blockage of the small pulmonary arteries of the lungs, strain on the right side of the heart, and eventual death from heart failure. The damage to the lung in severe cases can require lung transplantation. Patients with PAH have a high death rate, and the condition mostly affects women. Despite treatment advances, it currently has no cure. Current tests used to monitor PAH severity rely on established risk prediction scores based on clinical symptoms and on the use of an invasive catheter to measure pressure in the lungs. Doctors sometimes use echocardiography, or heart imaging, to measure pressures in the heart as an indirect measurement of lung pressure, but these tests tend to lack reliability and sensitivity. Now, a novel blood test can easily evaluate disease severity in patients with PAH and predict survivability.

The new blood test developed by researchers at the National Institutes of Health (NIH, Bethesda, MD, USA) measures DNA fragments shed by damaged cells. Researchers found that these fragments, called cell-free DNA, were elevated in the blood of patients with PAH and increase with disease severity. If future studies confirm the findings, this first-of-its-kind blood test for PAH patients could allow doctors to intervene faster to prevent or delay progression of the disease and possibly save lives. Cell-free DNA is a relatively new analytical technique that is growing in its potential medical uses, which include the early detection of heart- and lung-transplant rejection as well as early detection of cancer.

For their study, the research team analyzed cell-free DNA from blood samples taken from 209 adult patients, predominately women, diagnosed with PAH at two large U.S. medical centers. The researchers compared the results to cell-free DNA measured from a control group of 48 healthy volunteers without PAH at the NIH Clinical Center. They found that cell-free DNA was elevated in patients with PAH, and also found that cell-free DNA concentrations increased in proportion to the severity of the disease. Patients with the highest level of cell-free DNA had a 3.8 times greater risk of either death or a need for lung transplantation compared to those with the lowest level of cell-free DNA, the researchers said. Further analyses of cell-free DNA samples revealed that multiple tissue types – including the heart, blood vessels, fat tissue, and inflammatory cells circulating in the blood – were affected by PAH. The new blood test will allow researchers to better pinpoint the specific tissues involved in the PAH disease process. This knowledge may lead to new drug interventions for PAH, whose current treatment options may slow but not halt or reverse disease progression.

“Researchers have been actively searching for novel, less-invasive approaches to evaluate PAH severity, disease progression, and response to therapy for more than a decade. These cell-free DNA analyses represent progress toward that goal,” said study co-author Michael A. Solomon, M.D., M.B.A., who is part of the NHLBI Cardiovascular Branch and co-director of the NIH Clinical Center Pulmonary Arterial Hypertension Section.

“Here we’re proposing a one-time test where you collect a vial of blood from a patient and use that to predict survival. We’re very encouraged by the early results,” added Sean Agbor-Enoh, M.D., Ph.D., study co-author and chief of the NHLBI’s Laboratory of Applied Precision Omics.