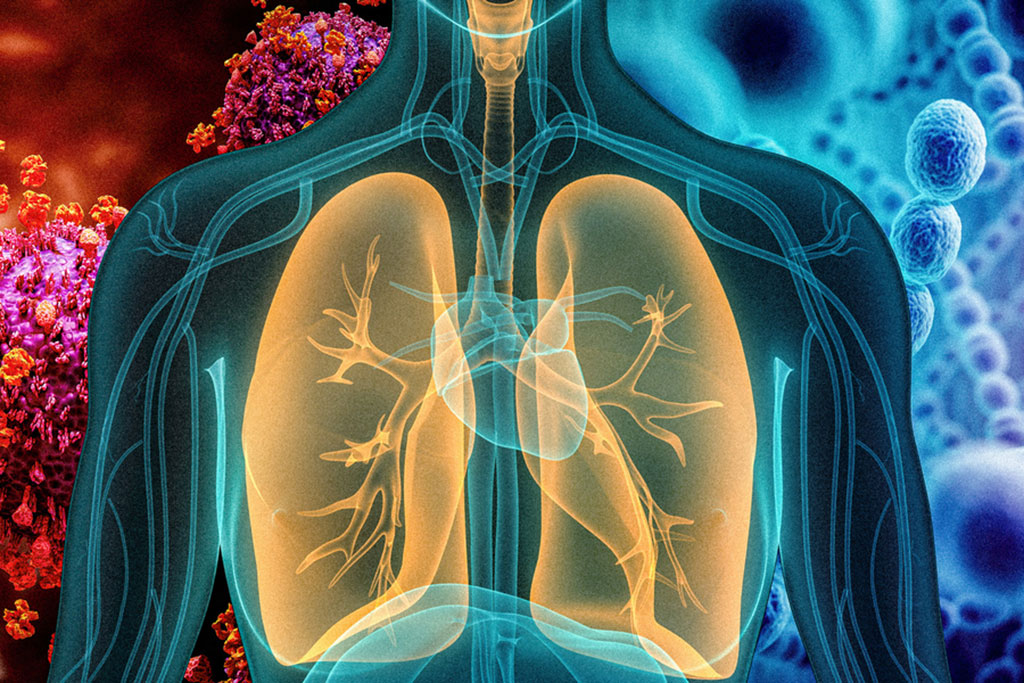 One reason why it has been difficult to distinguish between viral and bacterial pneumonia is that there are so many microbes that can cause pneumonia, including the bacteria Streptococcus pneumoniae and Haemophilus influenzae, and viruses such as influenza and respiratory syncytial virus (RSV). This uncertainty makes it harder for doctors to choose effective treatments because the antibiotics commonly used to treat bacterial pneumonia won’t help patients with viral pneumonia. In addition, limiting the use of antibiotics is an important step toward curbing antibiotic resistance. Now, researchers have designed a sensor that can distinguish between viral and bacterial pneumonia infections, which they hope will help doctors to choose the appropriate treatment.

In a study of mice, the researchers at the Massachusetts Institute of Technology (MIT, Cambridge, MA, USA) showed that their sensors could accurately distinguish bacterial and viral pneumonia within two hours, using a simple urine test to read the results. In designing their sensor, the research team decided to focus on measuring the host’s response to infection, rather than trying to detect the pathogen itself. Viral and bacterial infections provoke distinctive types of immune responses, which include the activation of enzymes called proteases, which break down proteins. The MIT team found that the pattern of activity of those enzymes can serve as a signature of bacterial or viral infection.

The human genome encodes more than 500 proteases, and many of these are used by cells that respond to infection, including T cells, neutrophils, and natural killer (NK) cells. The MIT team collected 33 publicly available datasets of genes that are expressed during respiratory infections. By analyzing those data, the researchers were able to identify 39 proteases that appear to respond differently to different types of infection. The team then used those data to create 20 different sensors that can interact with those proteases. The sensors consist of nanoparticles coated with peptides that can be cleaved by particular proteases. Each peptide is labeled with a reporter molecule that is freed when the peptides are cleaved by proteases that are upregulated in infection. Those reporters are eventually excreted in the urine. The urine can then be analyzed with mass spectrometry to determine which proteases are most active in the lungs.

The researchers tested their sensors in five different mouse models of pneumonia, caused by infections of Streptococcus pneumoniae, Klebsiella pneumoniae, Haemophilus influenzae, influenza virus, and pneumonia virus of mice. After reading out the results from the urine tests, the researchers used machine learning to analyze the data. Using this approach, they were able to train algorithms that could differentiate between pneumonia versus healthy controls, and also distinguish whether an infection was viral or bacterial, based on those 20 sensors. The researchers also found that their sensors could distinguish between the five pathogens they tested, but with lower accuracy than the test to distinguish between viruses and bacteria.

One possibility the researchers may pursue is developing algorithms that can not only distinguish bacterial from viral infections, but also identify the class of microbes causing a bacterial infection, which could help doctors choose the best antibiotic to combat that type of bacteria. The urine-based readout is also amenable to future detection with a paper strip, similar to a pregnancy test, which would allow for point-of-care diagnosis. To this end, the researchers identified a subset of five sensors that could put at-home testing closer within reach. However, more work is needed to determine if the reduced panel would work similarly well in humans, who have more genetic and clinical variability than mice.

In their study, the researchers also identified some patterns of host response to different types of infection. In mice with bacterial infections, proteases secreted by neutrophils were more prominently seen, which was expected because neutrophils tend to respond more to bacterial infections than viral infections. Viral infections, on the other hand, provoked protease activity from T cells and NK cells, which usually respond more to viral infections. One of the sensors that generated the strongest signal was linked to a protease called granzyme B, which triggers programmed cell death. The researchers found that this sensor was highly activated in the lungs of mice with viral infections, and that both NK and T cells were involved in the response. To deliver the sensors in mice, the researchers injected them directly into the trachea, but they are now developing versions for human use that could be administered using either a nebulizer or an inhaler similar to an asthma inhaler. They are also working on a way to detect the results using a breathalyzer instead of a urine test, which could give results even more quickly.

“The challenge is that there are a lot of different pathogens that can lead to different kinds of pneumonia, and even with the most extensive and advanced testing, the specific pathogen causing someone’s disease can’t be identified in about half of patients. And if you treat a viral pneumonia with antibiotics, then you could be contributing to antibiotic resistance, which is a big problem, and the patient won’t get better,” said Sangeeta Bhatia, the John and Dorothy Wilson Professor of Health Sciences and Technology and of Electrical Engineering and Computer Science at MIT.