Genetic Changes Identified in Patients Who Progress to Esophageal Cancer 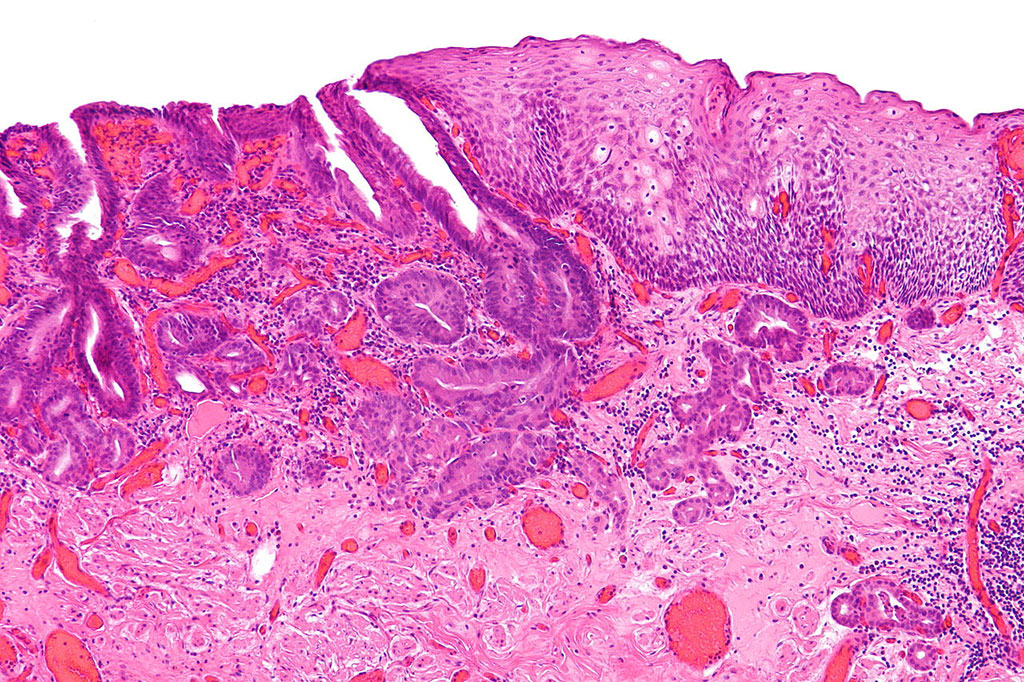 Barrett’s esophagus (BE), a predominantly benign metaplasia that arises in the esophagus in response to chronic gastric reflux, also develops somatic mutations, but can further evolve extensive genomic alterations which confer significantly increased risk of progression to esophageal adenocarcinoma (ESAD).

Cancer-only studies have uncovered a vast array of genomic alterations in cancer, but are unable to provide a direct comparison of somatic genome evolution of benign neoplastic tissue in non-progressing patients from those who were ultimately diagnosed with cancer. Barrett’s esophagus is an excellent in vivo model in which to study these genome dynamics.

A large team of medical scientists led by the Fred Hutchinson Cancer Research Center (Seattle, WA, USA) designed a case-control study was with 80 participants diagnosed with Barrett’s esophagus (BE). The demographics of the study were typical of BE and ESAD with 72 males and eight females, with the average age at T1 of 65.5 years (range 43-82) for cancer outcome (CO) and 66.1 years (range 41-87) for non-cancer outcome (NCO).

The investigators collected for each time point two fresh-frozen endoscopic biopsies, independent of those used for histologic evaluation, were within the histologically defined regions of Barrett’s esophageal tissue for whole-genome sequencing (WGS). Normal controls from each participant were sequenced from either blood (N = 62) or normal gastric biopsies when blood was not available (N = 18) and analyzed by 30X WGS and 2.5 M SNP array for paired analysis. Somatic chromosome alterations (chromosome copy number and cnLOH) were assessed in BE and control biopsies using the Omni 2.5 M 8v1.3 array (Illumina, San Diego, CA, USA). Several other molecular techniques were also employed.

The scientists reported that the same somatic mutational processes were active in Barrett’s tissue regardless of outcome, with high levels of mutation, ESAD gene and focal chromosomal alterations, and similar mutational signatures. The critical distinction between stable Barrett’s versus those who progress to cancer was acquisition and expansion of TP53−/− cell populations having complex structural variants and high-level amplifications, which were detectable up to six years prior to a cancer diagnosis.

Thomas G. Paulson, PhD, a senior staff scientist who co-led the project said, “Most progressors had two hits in TP53. Two hits would suggest a person is at very high risk for progressing from BE to cancer, though occasionally a person with one hit may also progress. Patients who progressed to cancer also had TP53 mutations in larger regions of tissue, compared to the single-hit, localized lesions in non-progressing patients. If both copies of TP53 in a person’s cells are broken, it’s very difficult for them to fix damaged DNA. This leads to duplications, deletions or reshuffling of large pieces of DNA.” In fact, the team saw that BE cells in patients who progressed to esophageal cancer were much more likely to contain these large, complex changes than cells from those who never progressed.

The authors concluded that their findings reveal the timing of common somatic genome dynamics in stable Barrett’s esophagus and define key genomic features specific to progression to esophageal adenocarcinoma, both of which are critical for cancer prevention and early detection strategies. The study was published on April 28, 2022 in the journal Nature Communications.