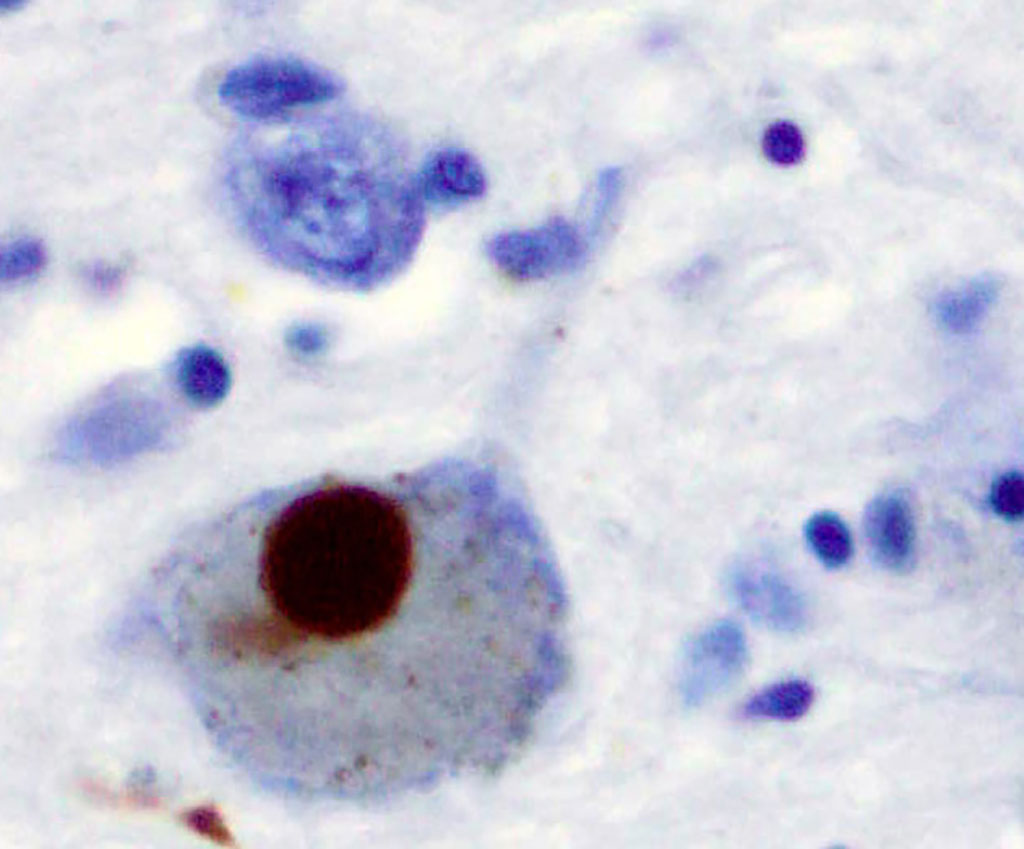 Image: Positive alpha-synuclein staining of a Lewy body from a patient who had Parkinson`s disease (Photo courtesy of Wikimedia Commons)
A team of British researchers adapted a sensitive analytical method to evaluate the diagnostic value of a real-time quaking-induced conversion (RT-QuIC) assay for assessing disease progression, stratification, and conversion in synucleinopathies such as Parkinson’s disease.

Real-time quaking-induced conversion (RT-QuIC) is a highly sensitive assay that originally was developed for prion detection. The "quaking" in the name of the technique refers to the fact that samples in the RT-QuIC assay are literally subjected to shaking. This action breaks apart aggregates of prion protein (PrP) that are then further incubated, amplifying the amount of misfolded PrP to detectable levels. Recently, the RT-QuIC method has been adapted to measure levels of alpha-synuclein, primarily from Lewy bodies, in cerebrospinal fluid (CSF). A Lewy body is composed of the protein alpha-synuclein associated with other proteins, such as ubiquitin, neurofilament protein, and alpha B crystallin. Tau proteins may also be present, and Lewy bodies may occasionally be surrounded by neurofibrillary tangles.

Previous studies have confirmed that the alpha-synuclein real-time quaking-induced conversion (alpha-Syn-RT-QuIC) assay had high sensitivity and specificity for Parkinson’s disease. However, whether the assay could be used as a robust, quantitative measure to monitor disease progression, stratify different synucleinopathies, and predict disease conversion in patients with idiopathic REM sleep behavior disorder remains undetermined. REM sleep behavior disorder (RBD) is a syndrome in which individuals with RBD lose the paralysis of muscles (atonia) that is normal during rapid eye movement (REM) sleep, and act out their dreams or have other abnormal movements or vocalizations. Abnormal sleep behaviors may appear decades before any other symptoms, often as an early sign of a synucleinopathy.

Investigators at the University of Oxford (United Kingdom) conducted a study designed to assess the diagnostic value of CSF aSyn-RT-QuIC in regard to disease progression, stratification, and conversion in synucleinopathies. To this end, they performed alpha-Syn-RT-QuIC on CSF samples from 74 Parkinson’s disease, 24 multiple system atrophy, and 45 idiopathic REM sleep behavior disorder patients as compared to 55 healthy controls.

Senior author Dr. Laura Parkkinen, associate professor of clinical neurosciences at the University of Oxford, said, "The most exciting finding of the study is that the detected clumps of alpha-synuclein differed between different clinical Parkinson's subtypes and between people with Parkinson's and MSA. These differences could represent distinct "strain profiles" which could not only provide a way to distinguish between different neurodegenerative disorders (MSA versus Parkinson's) but also provide a way to distinguish variations within a single condition. How the "strain profiles" vary within Parkinson's and how they relate to clinical subtypes will need to be investigated further. We now need to understand what the differences are in the clumping of alpha-synuclein between Parkinson's, dementia with Lewy bodies, and MSA. By getting these answers, we will hopefully be able to create a blueprint for effective diagnosis and therapeutics for these conditions."

The study was published in the December 11, 2021, online edition of the journal Brain.