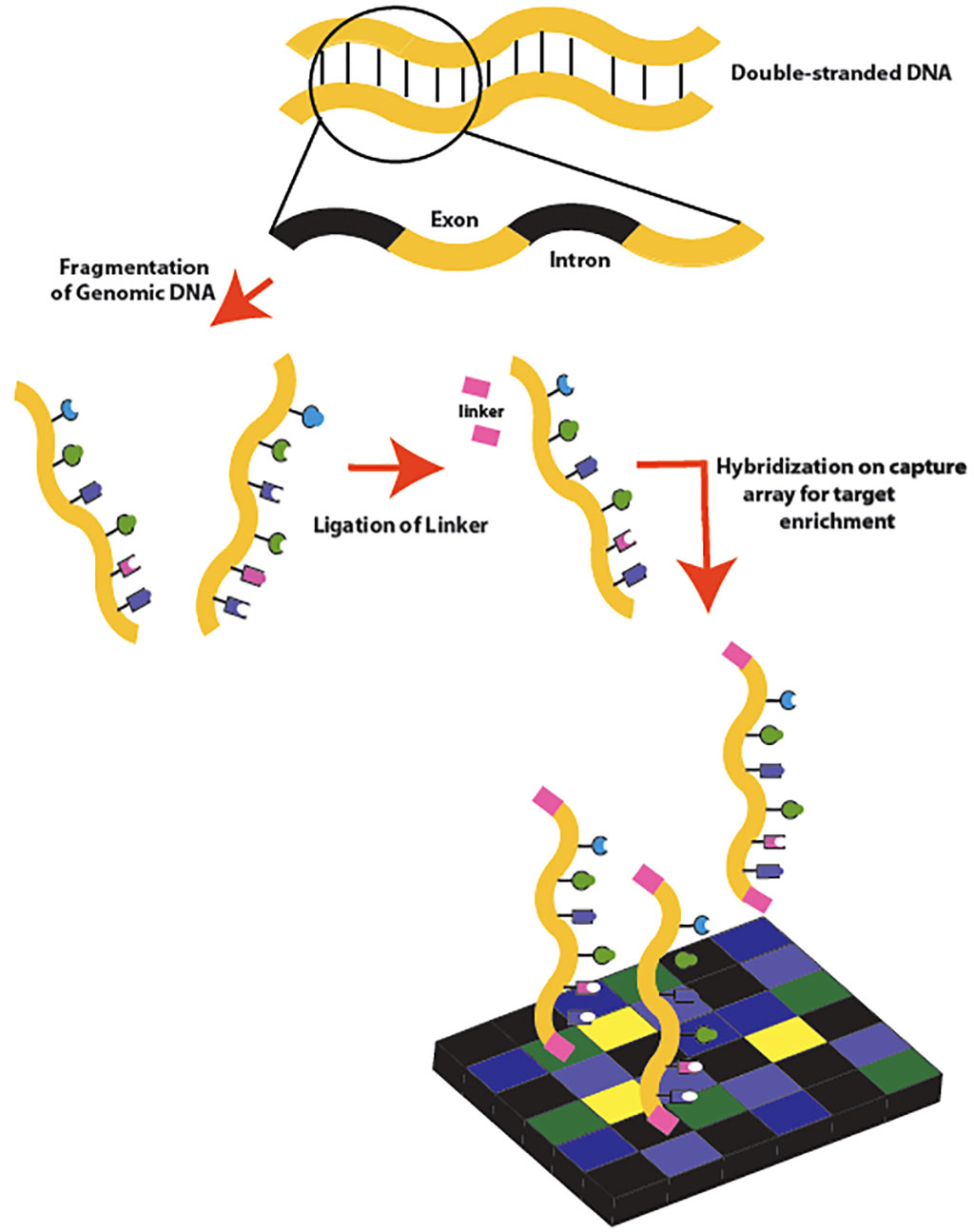 Image: Exome sequencing workflow: Double-stranded genomic DNA is fragmented by sonication. Linkers are then attached to the DNA fragments, which are then hybridized to a capture microarray designed to target only the exons (Photo courtesy of SarahKusala).
Cerebral palsy (CP) is a group of permanent movement disorders that appear in early childhood. Signs and symptoms vary among people and over time. Often, symptoms include poor coordination, stiff muscles, weak muscles, and tremors.

Cerebral palsy is caused by abnormal development or damage to the parts of the brain that control movement, balance, and posture. Most often, the problems occur during pregnancy; however, they may also occur during childbirth or shortly after birth. While CP has often been attributed to oxygen deprivation during birth, recent studies have suggested that birth asphyxia accounts for less than 10% of cerebral palsy cases and that genetic variants affect disease risk.

Medical Scientists at the Geisinger Medical Center (Danville, PA, USA) and their colleagues carried out a retrospective, cross-sectional cohort study of cerebral palsy. One cohort consisted of 1,345 individuals with cerebral palsy had a median age of 8.8 years old and underwent exome sequencing at GeneDx (Gaithersburg, MD, USA). The other cohort, meanwhile, included 181 individuals with cerebral palsy who were a median age of 41.9 years old and who were recruited from the DiscoverEHR project from Geisinger and the Regeneron Genetics Center. This second cohort underwent research-based exome sequencing.

Additionally, the scientists identified genes that harbored alterations in two or more unrelated individuals with cerebral palsy, including CTNNB1, KIF1A, GNAO1, and TUBA1A. Mutations in CTNNB1, they noted, have previously been reported in individuals with cerebral palsy and an autosomal dominant neurodevelopmental disorder marked by intellectual disability, spasticity, microcephaly, and visual defects. Pathogenic and likely pathogenic variants were identified in 229 genes (29.5% of 1,526 patients); 86 genes were mutated in two or more patients (20.1% of 1526 patients) and 10 genes with mutations were independently identified in both cohorts (2.9% of 1526 patients).

Andrés Moreno De Luca, a Neuroradiologist and assistant professor and first author of the study, said, “Finding a genetic etiology has the potential to prompt changes in clinical management, provide an end to the diagnostic odyssey and important prognostic information for patients and families, inform recurrence risk for future children born to the same parents, and may have medicolegal implications in cases of alleged birth asphyxia.”