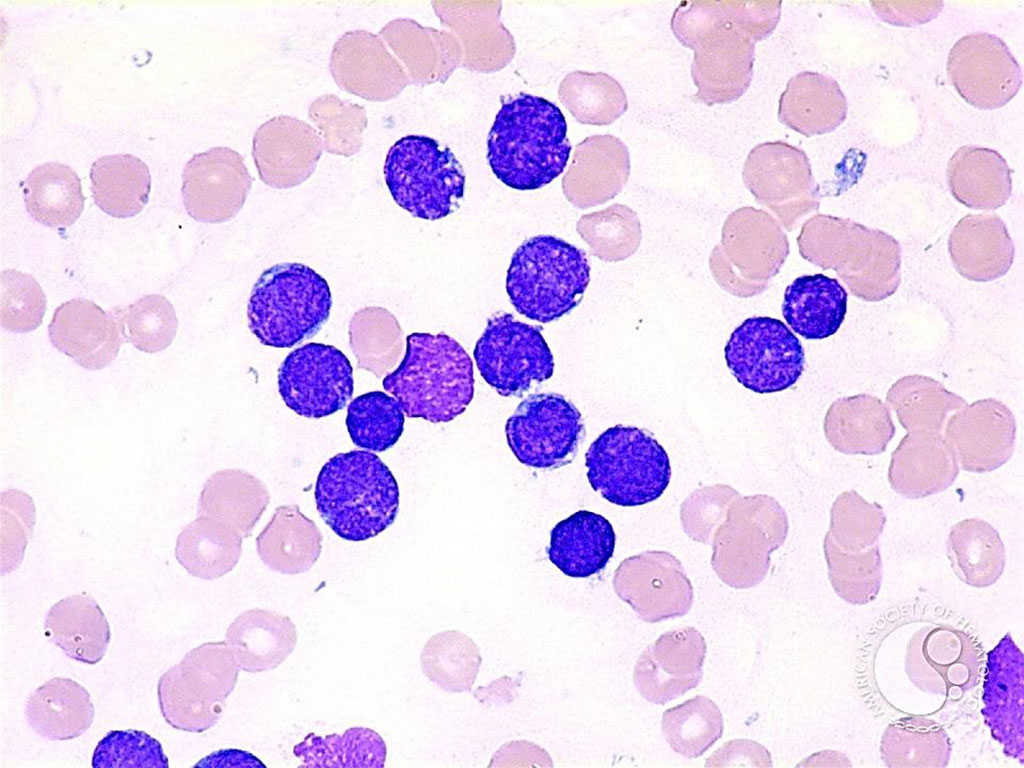 Image: Acute Lymphoblastic Leukemia: lymphoblasts appear small with a thin rim of cytoplasm (Photo courtesy of Peter Maslak MD).
The use of next-generation sequencing (NGS) to detect residual disease in acute lymphoblastic leukemia (ALL) patients after treatment can better gauge their risk of relapse and overall survival than multiparameter flow cytometry.

Although flow cytometry is commonly used to assess residual disease in leukemia patients, some patients deemed to be negative for measurable residual disease (MRD-negative) at remission by this method, later relapse. Scientists wanted to determine if using a more sensitive test to measure residual disease, like NGS, would benefit ALL patients.

Hematologists and Oncologists at The University of Texas MD Anderson Cancer Center (Houston, TX, USA) retrospectively analyzed data from 67 previously untreated Philadelphia chromosome-negative ALL patients who had received either a standard-intensity chemotherapy regimen or lower-intensity regimen. The team tested 109 bone marrow samples provided by these patients by both flow cytometry and NGS to determine MRD status.

In the analysis of the 84 samples that were MRD-negative by flow cytometry, the NGS test found 38% of those were MRD-positive, meaning leukemia remained in these samples that was below the level of detection from flow cytometry. Overall, when samples across patient subgroups were tested with NGS, they were less likely to achieve MRD-negative status than when tested with flow cytometry. The investigators broke up the study cohort into two subgroups by the type of frontline chemotherapy patients received, either a standard chemotherapy-based regimen (involving cyclophosphamide/vincristine/doxorubicin/dexamethasone), called hyper-CVAD, or a lower-intensity version of the regimen, called hyper-CVD.

Nicholas J. Short, MD, an assistant professor and senior author of the study, said, “It will always be somewhat complementary, even with the more sensitive flow assay, to use two different types of MRD assays that are looking at slightly different things, for example, using flow cytometry for other specific markers and an NGS panel looking at these rearrangements.”

The authors concluded that early assessment of MRD using an ultrasensitive NGS assay can identify patients with ALL who have a very low risk of relapse and excellent long-term survival. Prospective studies are warranted to assess whether de-intensification of therapy is feasible for this favorable-risk group of patients who rapidly achieve MRDneg remission. The study was presented at the virtual 62nd American Society for Hematology's annual meeting held December 5-8, 2020.