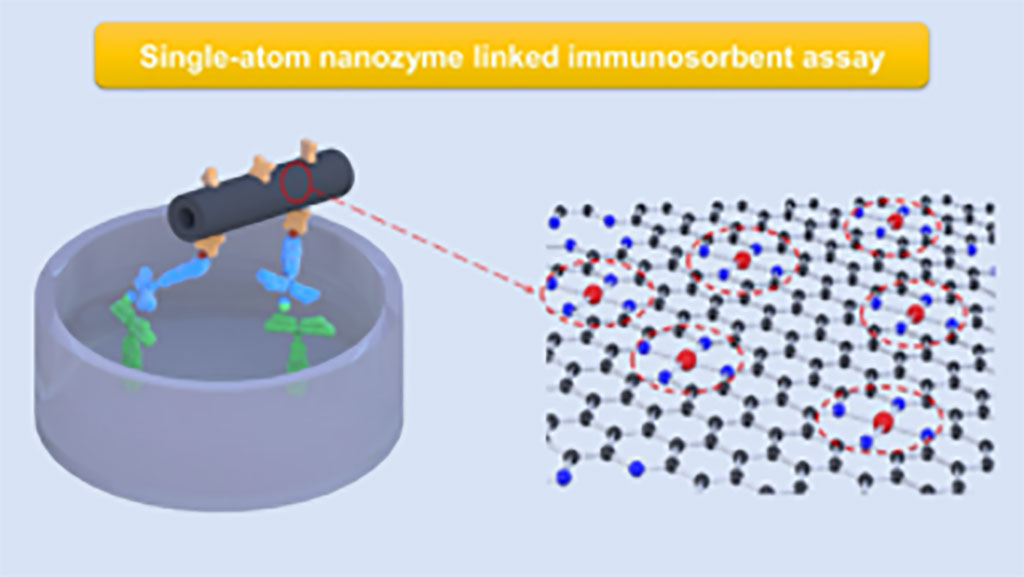 Image: A molecular-scale illustration of single-atom nanoyzmes and their application as a signal labels in an immunoassay. On the left, illustration of a protein biomarker being captured and detected in an immunoassay (Photo courtesy of Washington State University)
A novel modification made to the classic ELISA method for detecting the Alzheimer's disease biomarker amyloid beta 1-40 increased the sensitivity of the test by more than a factor of 10.

The ELISA method employing the natural enzyme horseradish peroxidase (HRP) has not been readily adapted for detecting the beta-amyloid proteins of Alzheimer's disease, as the concentrations of these proteins in the blood are too small.

To counter this problem, investigators at Washington State University (Pullman, USA) increased the sensitivity of the ELISA method by incorporating an artificial enzyme in place of HRP.

Single-atom nanozymes (SANs) possess unique features of maximum atomic utilization and present highly assembled enzyme-like structure and remarkable enzyme-like activity. By introducing SANs into the immunoassay, limitations of ELISA such as low stability of horseradish peroxidase (HRP) can be well addressed, thereby improving the performance of the immunoassays.

In in the current study, the investigators developed novel Fe-N-C single-atom nanozymes (Fe-Nx SANs) derived from Fe-doped polypyrrole (PPy) nanotubes and substituted the enzymes in a commercial ELISA kit in order to enhance the detection sensitivity of amyloid beta 1-40.

Results revealed that the Fe-Nx SANs contained high density of single-atom active sites and comparable enzyme-like properties as HRP, owing to the maximized utilization of Fe atoms and their abundant active sites, which could mimic natural metalloproteases structures. Furthermore, the SAN-linked immunosorbent assay (SAN-LISA) demonstrated the ultralow limit of detection (LOD) of 0.88 picograms per milliliter, better than 10 times more sensitive than that of the commercial ELISA (9.98 picograms per milliliter).

"The nanozyme based on a single-atom catalyst that we created has a similar structure as a natural enzyme with remarkable enzyme-like activity and paved the way for detecting the Alzheimer's disease biomarker," said contributing author Dr. Dan Du, professor of mechanical and materials engineering at Washington State University. "The nanozyme was also more robust than natural enzymes, which can degrade in acidic environments or in high temperatures. It is also less expensive and could be stored for long periods of time."

The modified Alzheimer's disease biomarker assay was described in the October 19, 2020, online edition of the journal Research.