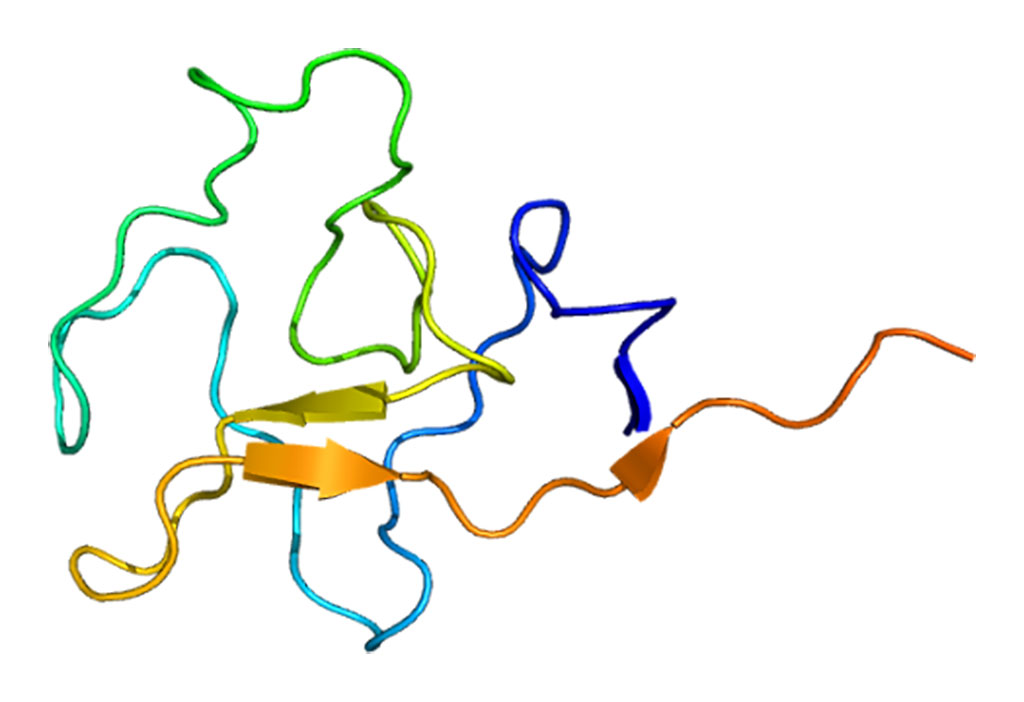 Image: Structure of the apolipoprotein(a) protein (Photo courtesy of Wikimedia Commons)
Measurement of the blood biomarker lipoprotein(a) predicts risk of developing cardiovascular disease as well as determination of such standard factors as cholesterol and triglycerides.

Lipoprotein(a) (LPA) is a plasma lipoprotein composed of a low-density lipoprotein (LDL) particle that is covalently linked to apolipoprotein(a) by a disulfide bond. On an equimolar basis, lipoprotein(a) is more atherogenic than LDL because the additional apolipoprotein(a) component may exacerbate atherothrombosis by promoting vascular inflammation and its potential antifibrinolytic activity is associated with inhibition of plasminogen. Lipoprotein(a) levels are 75% to 95% heritable and predominately determined by single-nucleotide variants at the LPA gene and copy number variants specifically in the kringle IV type II domain. Lipoprotein(a) levels greater than 50 milligrams per deciliter are associated with a 30 to 50% greater risk of ASCVD. Individuals with extremely high levels, greater than 200 milligrams per deciliter, may have a three to four times greater risk of ASCVD.

For this work, samples were obtained from The UK Biobank, which is a prospective observational study of approximately 500,000 volunteers aged 40 to 69 years who were recruited from 22 sites across the United Kingdom between 2006 and 2010. An LPA GRS was calculated for 374,099 unrelated individuals from this cohort with array-derived genotypes and lipoprotein(a) measures. The mean age of the overall study population was 57.6 years, and 204,355 individuals were female (54.6%). During a median follow-up of 11.1 years, 15, 444 individuals developed an incident ASCVD (peripheral arterial disease, coronary artery disease, myocardial infarction, ischemic stroke, or cardiovascular mortality).

The study was published in the October 6, 2020, online edition of the journal JAMA Cardiology.