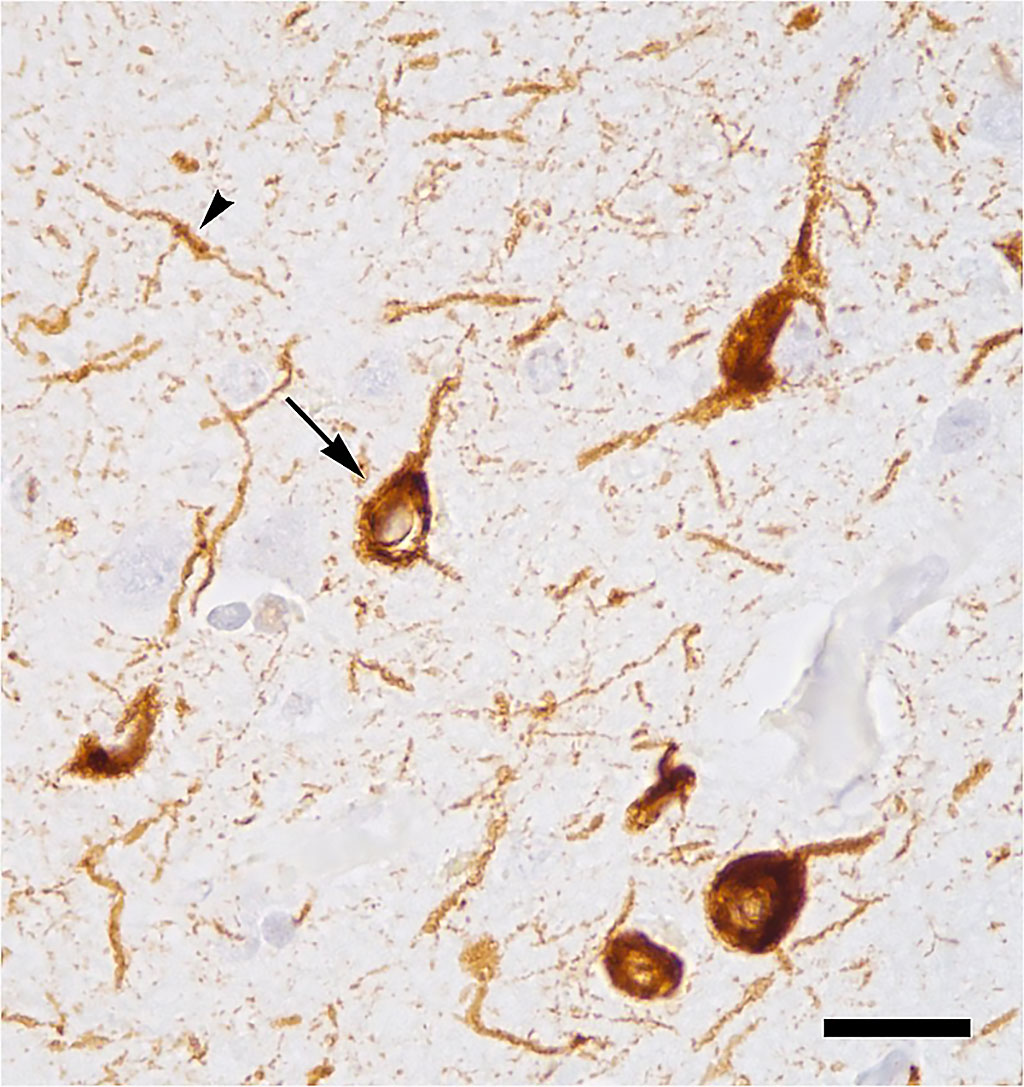 Image: Abnormal accumulation of tau protein in neuronal cell bodies (arrow) and neuronal extensions (arrowhead) in the neocortex of a patient who had died with Alzheimer`s disease (Photo courtesy of Wikimedia Commons)
Elevated levels of circulating phosphorylated tau 181 (pTau181) protein correlate with Alzheimer's disease (AD) and distinguish it from frontotemporal dementia, a condition that is often misdiagnosed as AD.

Since frontotemporal dementia is as common as AD among adults under 65 years of age, simple, widely available screening tests are needed to identify which individuals, with symptoms of cognitive or behavioral decline should be further evaluated for initiation of treatment. A blood-based test for AD would be a less invasive and less expensive screening tool than the currently approved cerebrospinal fluid or amyloid-beta positron emission tomography (PET) diagnostic tests.

In an effort to develop a blood-based test for AD, investigators at the University of California, San Francisco (USA) examined whether plasma tau protein phosphorylated at residue 181 (pTau181) could differentiate between clinically diagnosed or autopsy-confirmed AD and frontotemporal lobar degeneration.

Subjects aged from 58 to 70 years were tested to measure plasma pTau181. Participants in the study included 56 who had been diagnosed with AD, 47 with mild cognitive impairment, and 69 healthy controls. In addition, the study group included 190 individuals with different types of frontotemporal dementia, a group of brain disorders caused by degeneration of the frontal and temporal lobes, areas of the brain associated with decision-making, behavioral control, emotion, and language.

"This test could eventually be deployed in a primary care setting for people with memory concerns to identify who should be referred to specialized centers to participate in clinical trials or to be treated with new Alzheimer's therapies, once they are approved," said senior author Dr. Adam Boxer, professor of neurology at the University of California, San Francisco. "Being able to easily diagnose Alzheimer's disease at early stages may be especially beneficial to patients with mild cognitive impairment, some of whom may have early Alzheimer's disease. Individuals with early Alzheimer's are more likely to respond to many of the new treatments that are being developed."

The phosphorylated tau study was published in the March 2, 2020, online edition of the journal Nature Medicine.