An Omics Approach for Predicting Mutations in Protein-Metal Binding Sites 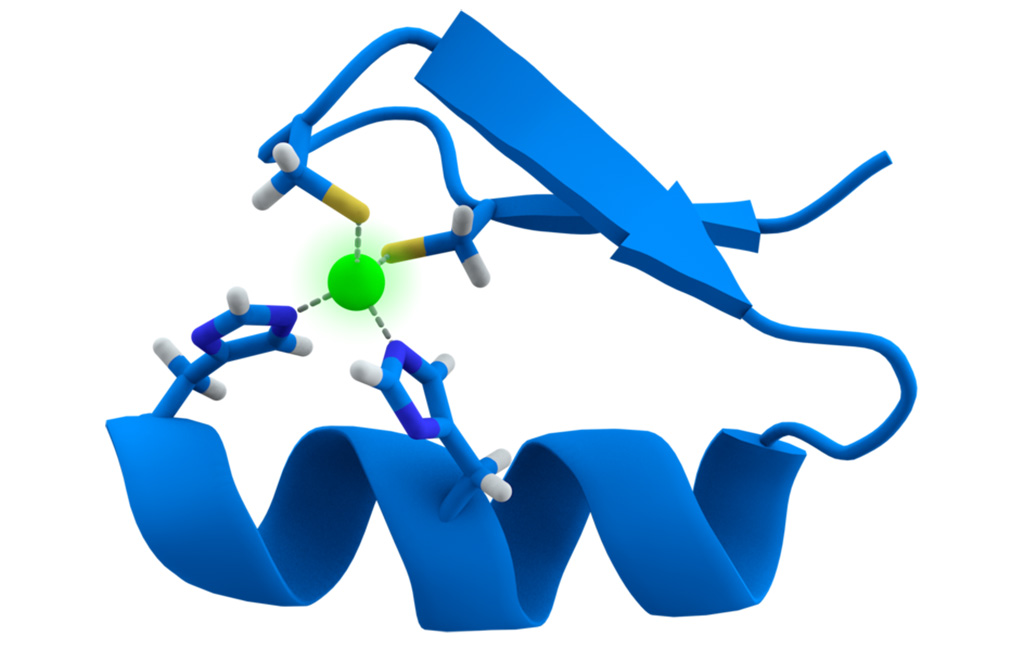 Image: Cartoon representation of the zinc-finger motif of proteins. The zinc ion (green) is coordinated by two histidine and two cysteine amino acid residues (Photo courtesy of Wikimedia Commons)
A deep learning approach was developed that was able to predict how mutations in the metal-binding sites of metalloproteins were related to various diseases.

Metalloproteins play important roles in many biological processes. Mutations at the metal-binding sites may functionally disrupt metalloproteins, initiating severe diseases; however, there has not been an effective approach for predicting such mutations.

In this regard, investigators at the University of Hong Kong (China) developed an “omics”-based deep learning approach to predict disease-associated mutations of the metal-binding sites in a protein. Omics (such fields as genomics, proteomics, etc.) aims at the collective characterization and quantification of pools of biological molecules that translate into the structure, function, and dynamics of an organism or organisms.

The investigators generated energy-based affinity grid maps and physiochemical features of the metal-binding pockets (obtained from different databases as spatial and sequential features) and subsequently incorporated these features into a multichannel convolutional neural network. After training the model, the multichannel convolutional neural network successfully predicted disease-associated mutations that occurred at the first and second coordination spheres of zinc-binding sites with an area under the curve of 0.90 and an accuracy of 0.82.

Senior author Dr. Hongzhe Sun, professor of bioinorganic chemistry at the University of Honk Kong, said, "Machine learning and AI play important roles in the current biological and chemical science. In my group we worked on metals in biology and medicine using integrative omics approach including metallomics and metalloproteomics, and we already produced a large amount of valuable data using in vivo/vitro experiments. We now develop an artificial intelligence approach based on deep learning to turn these raw data to valuable knowledge, leading to uncover secrets behind the diseases and to fight with them. I believe this novel deep learning approach can be used in other projects, which is undergoing in our laboratory."

The mettaloprotein binding site mutations paper was published in the December 9, 2019, online edition of the journal Nature Machine Intelligence.