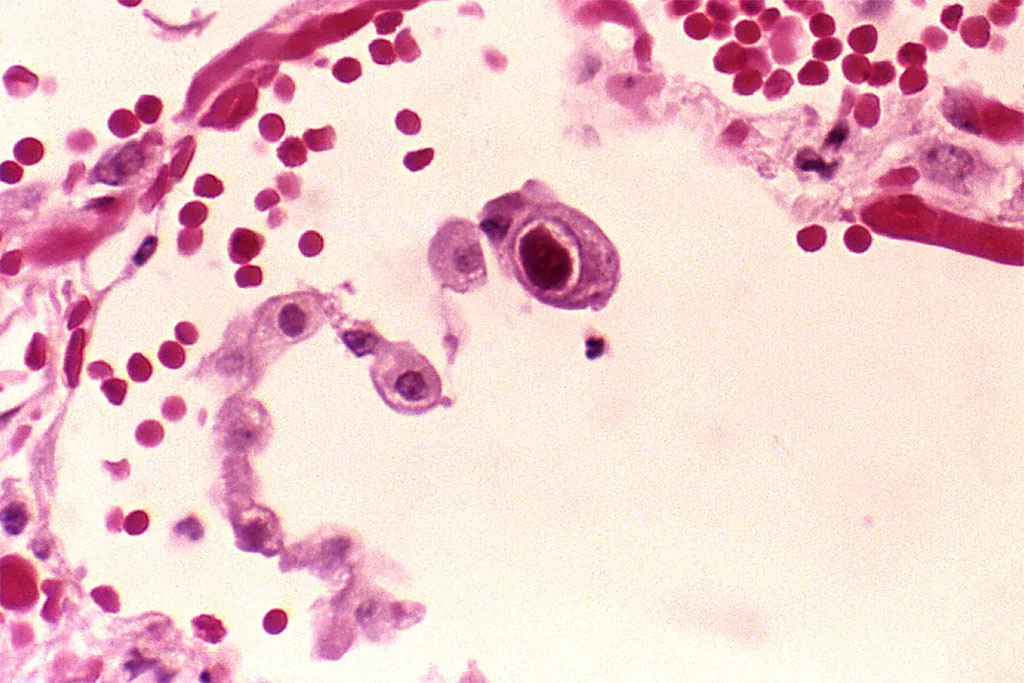 Image: Photomicrograph of a lung tissue specimen from a patient with an active cytomegalovirus infection. Histopathology revealed the presence of a cytomegalic pneumocyte, which contained the characteristic intranuclear, owl eye inclusion (Photo courtesy of [U.S.] Centers for Disease Control and Prevention)
Glioblastoma patients who tested positive for antibodies indicating exposure to human cytomegalovirus (HCMV) had more aggressive tumors and poorer prognosis than patients without anti-HCMV antibodies.

Glioblastoma (GBM) is the most common primary tumor of the central nervous system and is almost always fatal. The aggressive invasion of glioblastoma cells into the surrounding normal brain makes complete surgical removal impossible, significantly increases resistance to the standard therapy regimen, and virtually assures tumor recurrence. Treatment of glioblastoma usually comprises surgical removal of the tumor followed by radiation treatment and chemotherapy using the drug temozolomide (TMZ). However, the penetration of the tumor into adjacent brain tissue prevents the surgical removal of all tumor cells, which usually develop resistance to TMZ.

HCMV is a human herpesvirus that has been detected in GBM and is associated with worse prognosis in patients with the disease. The effects of HCMV systemic infection on survival in GBM patients, however, are largely unknown. In this regard, investigators at the University of Cincinnati (OH, USA) and their collaborators sought to determine the association between levels of anti-HCMV antibodies at time of GBM diagnosis and survival via a retrospective cohort study of GBM patients.

Results revealed that 97 of the 188 patients (52%) were anti-HCMV IgG seropositive. Individuals who tested positive for HCMV exposure lived an average of 404 days after their cancer diagnosis compared to an average of 530 days for patients who had never been infected by HCMV.

"We believe that human cytomegalovirus is a possible contributor to the aggressiveness of human glioblastoma tumors," said senior author Dr. Charles Cobbs, director of the Ben & Catherine Ivy Center for Advanced Brain Tumor Treatment at the Swedish Neuroscience Institute (Seattle, WA, USA). "These are highly malignant tumors, and there is significant evidence, albeit controversial, that HCMV is present in a high percentage of these tumors."

The results obtained during the current study suggest that having a prior infection and a presumed latent infection with HCMV may somehow predispose patients to have a more aggressive course with glioblastoma. "This could potentially be due to either a viral infection of the tumor itself, as shown with a mouse model from our collaborators at Harvard Medical School (Cambridge, MA, USA), or potentially systemic effects of reactivation of the virus during radiation and chemotherapy, which in and of itself could be an independent factor in promoting encephalitis and other life-threatening complications," said Dr. Cobbs.

The glioblastoma-HCMV study was published in the September 7, 2019, online edition of the journal Neuro-Oncology Advances.