Chronic Comorbidities Are Prevalent Among People with Chagas Disease 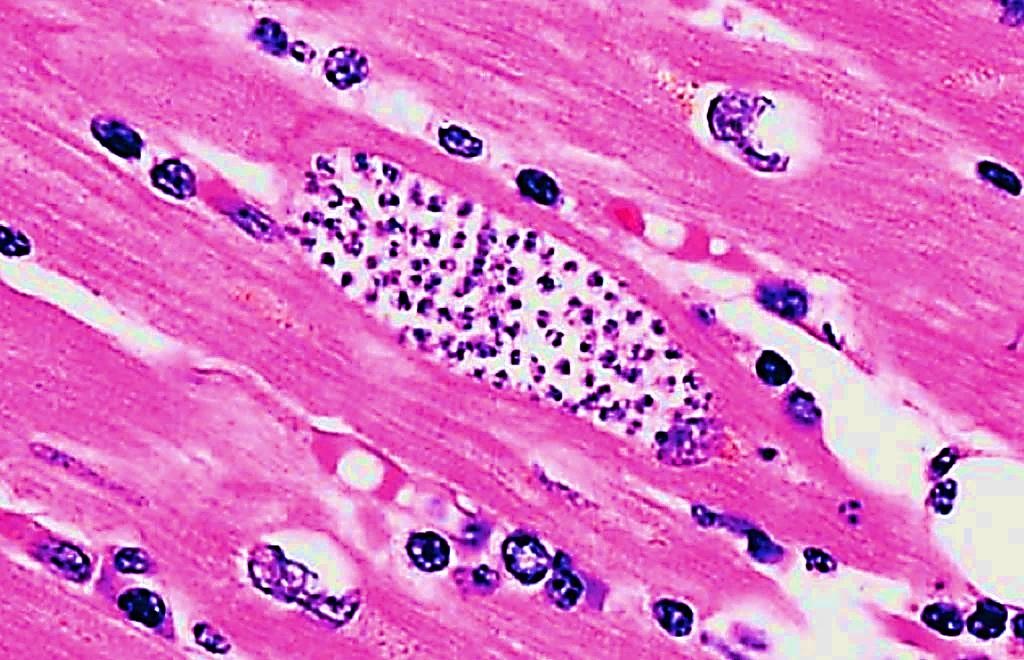 Image: Trypanosoma cruzi amastigotes in heart tissue from a patient with Chagas disease (Photo courtesy of the CDC)
Chagas disease, also known as American trypanosomiasis, is a tropical parasitic disease caused by the protist Trypanosoma cruzi. It is spread mostly by insects known as Triatominae, or "kissing bugs". The symptoms change over the course of the infection.

Although Chagas disease is often thought of as a parasitic infection that predominantly affects rural areas of Latin America, it should be noted that a large epidemiological burden of cases in the USA, including an estimated 70,000 in California, 37,000 in Texas, 18,000 in Florida, and 17,000 in New York, none of which included undocumented individuals.

Scientists from the Center of Excellence for Chagas Disease, Sylmar, CA, USA) and their colleagues performed a retrospective chart review of 221 patients from their center, who were a mean age of about 56, and had been in the USA for an average of 37 years. More than half of the patients were women, about half were from El Salvador, with about a quarter from Mexico, and a little less than half were ages 50-69. A little over 30% of these patients had cardiomyopathy. The most common comorbidity among these patients was hypertension (43%), followed by obesity (39.6%) and hyperlipidemia (30.6%). Only 30% of patients had no comorbidities, while 9% had five or more in this cohort.

Men had a significantly higher number of comorbidities compared with women (2.22 versus 1.63, respectively), and the same was observed for patients with cardiomyopathy versus patients with no cardiomyopathy (3.06 versus 1.34). The team noted that comorbidities increased with age, with patients ages 70 and older having a mean of almost three comorbidities compared to younger patients ages 18-39 with less than one. They also noted that about 63% are living below the federal poverty level, 66% have less than a high school education, and 72% rely on public insurance in California. In a multivariable linear regression, age and presence of Chagas cardiomyopathy were significantly associated with the number of comorbidities.

Salvador Hernandez, MD, project manager at the center, said, “That of patients who are infected with Chagas disease, 30%-40% will progress to the chronic phase of the disease, which does not present until 20-30 years after the initial infection. Of these cases, 60%-70% will have cardiac involvement. This starts as abnormalities on EKG, such as a right bundle branch block or a left anterior fascicular block. These symptoms are followed by slow progressive cardiomyopathy until symptoms of heart failure and sudden death from arrhythmia. At this final stage, the disease becomes irreversible and treatment with anti-parasitic therapy does not alter the disease course. This points to an urgent need for comprehensive care of these patients and for earlier, more proactive screening and treatment of this largely hidden disease.” The study was presented on November 22, 2019 at the American Society of Tropical Medicine and Hygiene Annual meeting held in National Harbor, MD, USA.

Center of Excellence for Chagas Disease